Getting older gets you thinking

It doesn't seem that long ago that I remember being called a young pretender by Topper Haskins. You don't like that stuff when you're young because you just don't understand, until you have experience (age) you don't know what experience gives you. As a young un you can be bold, brash, and go for it knowing if you mess up nobody will take the mick as your still learning. If top anglers such as Des Shipp or Tony Rixon have a bad day they know they will get some stick, but take it in good heart of course!

Why am I saying this? Well looking at some recent results got me thinking... Jamie Dyte is a young un currently taking Cider Farm lakes apart, and 17 yr old Lewis Jones has the Match record at the venues Yarlington Mill lake with 155lb! Andy Powers who is a Thatchers team mate, already made his name winning many matches at Viaduct fishery and other commercial venues, now he has qualified for the Fish'O'Mania final! These lads are at an age where they have a fantastic future ahead of them (if they can safely steer through the booze and birds phase) as they are "growing up" on commercial fisheries which are now the life blood of match angling. They've got good performances under the belts and as they get more "experience" could become the future top South West anglers. (Of course there are many other good young uns out there, these are just some recent examples.) 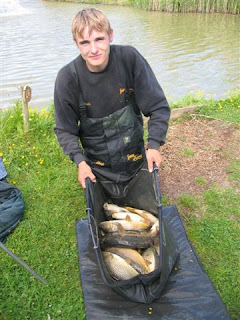 So what about me, how does it feel taking on a young un and getting your ar5e kicked.. not nice. How can they beat me with my 25 years "experience"! Well really it's partly my fault, but also how fishing has changed. As you may know from my posts, I grew up on rivers, I spent hours and hours on them learning all the time to the point where generally I just know what is happening when I'm fishing the river (you still learn, but there's a natural ability). But river fishing is limited now, and the majority of events and big competitions are all on commercials. So my skills are not fully utilised, fishing paste and how to feed it seems almost alien to inching a stick float down a peg. But I spend my spring and summer fishing commercials and give it my best shot, and I'm always learning!

But.... Now in my 40's with a busy job and a family I have not got the time I had when I was "young free and single", so preparation and time on the bank are limited. Plus I still have to get my fix on rivers and canals so I am not totally focused on commercials. Personally I find it hard to go to the same venue week in week out, I like variety, but this is another weakness, as venue regulars know the fishery moods and have a head start. Successful commercial fishery anglers like Tony Rixon and Mike Nicholls now only fish commercials and made the move away from being river anglers some time ago. Their results show they did the right thing and they love what they do, but for me the thought of not having to look forward to a river session is not possible.

Perhaps when I'm older and the river banks are to steep for me I will be settled in to commercials only. But for now I'll stick to my way, and relish the challenge of taking on the young uns and the experts, and if I get a bit of coin it will be even sweeter! Off to Cider Farm Sunday.....
Posted by Tim Ford at 09:32