In Nov 1989 I travelled to Northern Ireland and the River Bann in the back of Tony Rixons van sat on a foam pad on a Shakespeare box! I don't think I could do that these days, but with Tony and Pat Donahue in the front seats I couldn't argue!

By the way, you may recall I recently wrote that I had entered 15 suggestions for the Match Fishing Caption Competition featuring a certain Mr Rixon. I got an email from Dave Harrell yesterday telling me I had won, very satisfying to win a prize at the expense of Tony, lol!

Anyway, this trip to the Bann had been set up by Charlie Barnes, who provided us with loads of bait and put a large percentage of the takings back in as prize money. Charlie had to drop out at the last minute and Ron Gaulton (RIP) and Tony did most of the organising. I recall on the way over on the Ferry Pete Sivell and Dave Lewis got into some serious card games, they gambled more money than I had for the whole weekend! I always enjoyed the Ferry crossing in the middle of the night, you had to drink to pass the time!

Arriving at the Boathouse section of the river we were greeted with gin clear water, not ideal bagging conditions. This match was dreadful with many anglers packing up and trying other stretches. I had about 5 roach, and watched Ron Gaulton weigh in on the end peg some bream to easily win. I caught a 5lb bream on Ron's gear waiting for the weigh in, then Mr rixon had a go and struck so hard on a bite he snapped the main line and lost everything! Back at the hotel at dinner it was decided to fish Hoys Meadow the following day as some of the lads who packed up in the match caught well here. But as it wasn't clear how well the roach were spread it was decided to put in extra pegs; so the drawbag would only contain pegs 1 to 16 but if any angler was blanking after an hour they could move to peg 17 and so on. Can't remember much about that night, I think I passed out...

Day 2 and I draw downstream end peg 1 (done that a few times over the years!) and on peg 2 for company is Sean Glover (excellent match angler now turned barbel head). Guess what after an hour I'm blanking! I walked every peg and squared it with every angler that I was going to fish peg 17, no problem. By the time I got all my gear up to the peg and was ready to fish at least 1.5 hours had now passed. For company I had a curly haired Tony Rixon on peg 16 (he likes drawing end pegs too). I should say that most of the anglers had been adopting the usual Bann tactics of long pole to hand using a 6grm float, 6lb main line with 3lb hooklength, feeding balls of groundbait with maggot and caster. I had also set up a big Nene waggler with a bulk of 8 no6 shot 1 foot from the hook, this was on 2.5lb bluefin line direct to a 14 hook. Tony said he had a few but it was mot manic, and as I started on the pole I had some roach but I was not catching fast enough. So I picked up the wag and started loosefeeding pouches of maggot and caster, something nobody else was doing. All of a sudden I started to get roach and it got better and better. I was swinging everything, and eventually snapped the line swinging one to many 1lb roach! About an hour to go I saw Tony was stood up on the bank straining to see me, "your catching on that aren't you!" he said and he hastily tried the waggler. At the end as the scales made there way up there was a 60lb and a couple of 50lbs, I weighed in 46lb and beat Tony who had fished for 1.5 hours more than me! I think he had a bit of ear bashing! Can't remember much about that night, I think I passed out... But, according to Tony Rixon I was drinking whisky crawling around on my knees and wanted a fight with Graham Beevor, but I do not recall any of it!

Day 3 I now knew I had the wag sorted and prayed for a draw in the middle of the match length, I got just that and was drawn next to Ron. Ron would only fish the pole so I thought that could make the wag even better for me. Fishing 4lb to 3lb maxima to a 14 superspade hook with 3 red maggots I was winching them in! During this day I fed 10 pints of bait, mainly maggot and some caster. I would cast out, feed 2 pouches and then pick up the rod to strike, if I missed the bite I put the rod down and fed another pouch and then I would get another bite to strike at! I won the match with 87lb, all roach 95% on the wag, Ron was 2nd with 60lb. That days fishing will go down as one of my most enjoyable. Here's a piccy, it's not to good because it was nearly dark when the weigh in was done, but you can see how big some of the roach were by comparing to the ring of the keepnet. 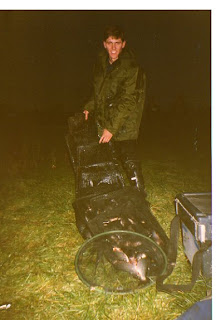 That night I went to the house of an Irish friend of Sean's and they got the Vodka out, I was so tired I fell asleep and only remember coming round when being lead / carried out of the house with someone elses shoes on! I don't know if it was the bagging or the Vodka that made me so tired....

Day 4 To do any good overall I needed to win, but I drew end peg 1 again. I was next to John "Gimp" Bradford, and he like me knew we had no chance. I had 26lb for nowhere but watching John snag up on the pole and break a section was quite funny!

I don't remember who won the weekend overall, because as soon as we got on the Ferry I fell asleep and slept through the presentation, late night drinking and fishing for 4 days had taken its toll (perhaps Tony can remember who won?)

I do actually have some pictures of the nights out in the hotel (Graham Beevor / his wife took them) but luckily they are all in my possession and won't been seen on here!
Posted by Tim Ford at 18:47