It's good to be back on the Cider

HAVE THAT YOU AUSSIES! Get in there England, 20/20 World Champs, absolutely destroyed those Aussies, about time we've won something and I think Collingwood should be applauded.

After last weeks dismal performance I had booked in on the Cider Farm open on Yarlington Mill. There were only 12 people booked in, which was a shame (a lot of regulars fishing the Kev Perry league) but it did mean lots of space which should help the fishing. I was the last person to arrive at the draw, held up a tad chatting to some of the PSV anglers who were fishing Dabinett, namely Steve Hutchinson and Eddie Wynne.

I was the last person to draw, but the there were 2 pegs left in the hat as the guy holding the draw bag wanted the last one, I drew peg 25 leaving him with 41. My first reaction was that I'd drawn the wrong one, but a quick word with Cider regular Derek Culip cheered me up as he told me he had done well off of it a couple of weeks ago. There is no bare bank to fish to on peg 25 as it is solid reeds, but the reeds here are very dense and it is fairly safe to fish next to them, and there is a nice bit of open water in front. I found 3ft tight to the reeds to my left and the same to my right, a 4x10 Preston PB4 to 0.15 powerline and a PR36 for banded pellet was readied for this line. I also set up a rig at half depth against the reeds, a deep rig for anywhere else (the rest of the peg was virtually the same 5ft depth) a paste rig for deep and that was it.

Whilst setting up I had noticed the reeds had not been knocking that much and I wondered if the fish were going to be in the area. To start I fed a near full small Preston pot of micros and a few 4mm to the left island reeds, all 4mms to the right island reeds, and a cup of 4mms at top set +1 to my right. Baiting up with a 6mm banded pellet I had to wait all of 5 seconds for the float to go under and carp no1 was nailed. Next put in and 5 secs later carp no2, next chuck a skimmer so on with the toss pot and in went some micros. I then had 5 carp in 5 chucks, again all within seconds of the float settling! This was heaven, perfect fishing, but then a fish caught a reed and I smashed the float up pulling for a break. Of course I had expected this to happen, so I was ready with my identical rig, but for some reason this float took an extra no10 stoz. The next couple of hours were good, I was not catching carp within seconds of the float going in anymore but getting indications and fish regularly. I did lose another rig, and a couple of hook lengths, all to the same piece of reed just submerged.

The right hand swim never produced and neither did the inside line, and as my left hand swim was now getting hard work, and the sun was out, I started loose feeding 4mms across to the right hand island point (about 13mtr). I thought I might catch shallow here but it didn't work out like that, and after about 20 mins of feeding I had some fizzing and caught on the bottom, first time this year down here! I was fishing one of Mr Rixons finest jelly pellets on the hook, and I probably took around 12 fish from here before they went cagey. I guess they backed off as the fizzing stopped completely and so with an hour to go I decided to try back on the left hand reeds swim again. I took a couple of fish deep and a couple half depth, but it was slow, and with 30 mins to go I realised that they'd come up in the water. I set up a rig set at 9 inches deep and I by feeding some micros and tapping the water I took another 5 fish before the whistle went.

Other than the old boy on 41 (opposite me) who had really struggled, I had not much idea how it had fished, I thought I had 40+ carp for about 80lb which is usually enough to frame. As it turned out I weighed 98lb to win the match, and banish the bad vibes of last week, a thoroughly good days fishing. Picture kindly supplied by fishery owner Mark. 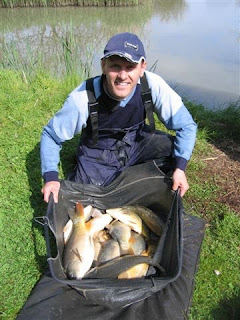 1st Tim Ford 98lb
2nd Derek Culip 67lb (on the deck on pellet, and up on the mud with paste)
3rd Brian Slipper 60lb (caught shallow on banded pellet)

The PSV match on Dabinett was a tough affair for those anglers not on pegs 6,7 and 21 I believe.

I think that means that I've managed to amass my half century of AT County Champs points. I think this is a clever idea by AT, and it has added a but of spice to proceedings, I'd like to get into the top 20 match at the end of it.

Off to Goodiford Mill next week with Mr Bailey, a new place for me so perhaps I'll get another spanking, why don't I just stay at Cider Farm.....
Posted by Tim Ford at 20:08