Fishing the Poppy Match is a great experience for me, every year you get to see faces from the past. There are many anglers who I only see once a year at this match, Topper Haskins being one of them. After a couple of bacon rolls I was off to the front of the draw queue, I took the risk of drawing any peg and was hoping for a short walk. I actually drew peg 56 at Newbridge which is a fair old walk but a peg with a very good chance of bream. As I got myself to peg 101 I was indebted to Phil Fabio Harding who proceeded (without being asked) to pull my trolley all the way to peg 56, I owe you a pint Phil (he didn't go back to results).

It wasn't going to take me to long to set up as I had only taken two feeder rods to keep the holdall light. On one I attached a 15 B711 to 0.13 and on the other a 11 B711 to 0.16. The river had colour and everyone was thinking big weights of bream, I wasn't so sure, I've seen the river a number of times like this and on the Poppy match 20lb+ is usually a good weight. I mixed red magic and brown crumb, chopped some worms and was ready. On the bream hole peg 54 was last years runner up and organiser Ray Bazeley, and he was in feeder only mode like me.

I started the match by having 12 quick chucks with a big feeder to get some bait in, and then settled down with 3 red maggots on the hook. In the next half hour I caught 2 roach and a hybrid and missed a couple of bites before it went quiet. I noticed that my hook had become blunt for some reason, so I decided to try half a lobworm on the big hook while I changed hooks. First cast on the lobby and I noticed that I had a small rattle on the rod tip which looked like an eel bite. I left this to develop but for about 30 seconds there was just the odd tiny rattle. A rowing boat approached and so I dropped the rod tip to the surface to keep the line clear and hope the eel would engulf the lob. When the boat had cleared I struck, and wound in a 3lb bream! That was a first for me, such a tiny bite on a lob, amazing. The next 15 mins were biteless, so I went back on the smaller hook with three red maggots and had an instant bite and a bream of about 3 1/2lb. It was now 12:20 and there were just over 3 hours to go and I was feeling like my luck in this match was going to continue!

Well there is not much more I can write about my tactics etc, because I never caught another fish! I tried all sorts of hook baits, I even tried scaling down and did have a couple of small bites. I struck at every indication, but never connected, and in all honesty I think the only bites I had were from roach because I only had bites on maggots and one was often nicked. I did have 2 drop backs but each time the bait was not touched, maybe liners?

By the end of the match I knew I would do no good as Nathan Hawke in the Norfolk Reeds had bream and so did Kev Dicks below him. Nathan won my section and framed with 14lb 10oz, and as there are no defaults in this match I didn't get a pick up. I did managed two bottles of plonk on the raffle though! Thank to Paul Haines for dragging my trolley back at least halfway for me, again I asked for no help but Paul just came up and did it, cheers mate.

The winner on the day was none other than my team captain Mark Harper. Mark took 5 bream (2 were 7lbers) on the feeder from peg 24. Mark did pull out of 2 so could have been a very convincing winner. In second place was another team mate Lee Trivett. Lee was drawn a couple of pegs below the New Fence (Crane) and after a very slow start (and having a walk, which is always a good trick) he ended up taking 4 bream, some skimmers and roach, oh and a 5lb pike! Third was Kev Dicks from peg 63 at Newbridge, Kev had bream to over 7lb on the feeder, including one right on the all out.

As ever the real winner was the British Legion with around £840 being raised for them. There were a lot of thank yous given out to all the sponsors who help make this match so well attended (I imagine there was nearly 100 fishing). However, I would like to give my thanks here to the two organisers Ray Bazeley and Paul Benson and to the stalwart of this match Bill Milton who always reads the remeberance prayer before the match and presents the prizes. Bill has had a very rough year since the last poppy match, but he is a fighter and I sincerely hope to see him on the next Poppy match. See photo below of the three amigos! 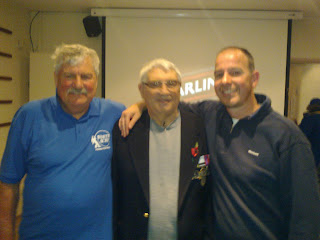