I had already planned to have this weekend off as during the previous week I had been unable to find a match with any spaces, of course once the I saw the forecast I decided it was a stay at home weekend. To any anglers who did get out and fish this Sunday I say fair play to you, and hope you managed to catch and keep warm.

As mentioned in a previous post this is my last historical (thanks for the word Woody) blog until I move house and find my old diaries out, so I'm hoping the weather improves so I can get out on the bank again.

In 1993 the Commercial House Xmas match was run on the Bristol Avon at Frys, this match was always held on this venue but some years later it was changed to the canal due to the poor fishing at Frys. On this day I drew peg 70 at Frys, the pegging is different now and I was somewhere up in the deep water. The river was a little pacey and due to the depth I decided to go all out on the groundbait feeder. Bites were few and far between and everything I caught was taken on double red maggot, 3 skimmers, a chub and couple of roach weighed 6lb. I pulled out of a bream which cost me framing but I took a prize home. The following day I was just a little further up river fishing the Bristol & West Xmas match. I drew a short walk just above the cattle grid on the Crane stretch, a peg where I should catch but I doubted I could frame from. The peg was steady in close, as the main flow goes across the river, and a 7no4 wire stem stick float was my weapon of choice. Using a 22 to 0.08 and loose feeding hemp and maggots I caught small roach and dace well for the first two hours, but after this it was much harder and the peg got progressively worse. I enjoyed myself (as I always do fishing a stick) and ended with 6lb 11oz which won me the section. The match was won with 38lb of chub from peg 14 at Swineford (still a good peg today) more chub came from peg 19 and bream from peg 29. Not a bad match for many anglers.

The following Saturday I pleasure fished the K&A canal at Limpley for a couple of hours, but 1 skimmer, 1 roach and 20 gudgeon were all I had to show for my efforts. On the day as soon as a few boats went through it killed the swim. Sunday morning and what back then was THE big Xmas match, the Bathampton Xmas on the river. I drew in the trees peg 138 which I was not unhappy with as the river was coloured and rising. It was an out and out feeder match and the river fished hard. I fished the feeder just 1/4 of the way out and found double and triple red maggot got me bites, well a few! I only had 1 gudgeon, 1 eel and 1 chub for 1lb 14oz, but lost a big chub which snagged me up. The match was won with only 11lb reflecting how hard it fished, and my lowly weight won me a litre bottle of vodka.

Just one weekend of fishing remained for me in 1993 with another two Xmas matches. On Saturday 18th Dec I was fishing my team's Xmas match (Bristol Sensas) and drew in the Lane at the Crane. The river was fast but not badly coloured but I made a big mistake of fishing the feeder in close. I spent a lot of time in snags and only managed a pathetic 9oz comprised of an eel and a hybrid. When I watched the weigh in and got back to the results and listened to those who caught and I realised I should have fished further out. It was a lesson in understanding the pace of the river and where the bigger fish will feed. Never mind I could make amends the next day on the Docks Xmas match, especially if I could draw at Welshback! Alas on Sunday my drawing arm failed me and I ended up pegged outside the Ostrich pub and I never had a bite all match! I wasn't the only one as the skimmers refused to feed and the place to be was Half Penny Bridge and Avon Street for dace and roach. Not a good end to the year then, but I'm sure I drowned my sorrows very quickly, lol!

Just coming back to today, I recently won a min competition run by Dave Harrell on Facebook and he sent me some floats to try out on the Bristol Avon (pic below). Alas I wonder if I will get the chance to use them this season, Graham Hunt reckons its 3/1 to Bolo floats get used and 20/1 the wagglers and I wouldn't argue with that! 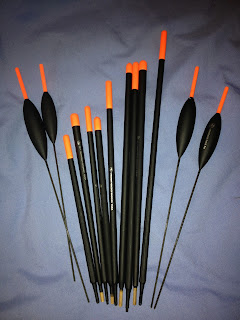 While I'm at it, here's a picture of a peg I have drawn, anyone like to take a guess where it is? 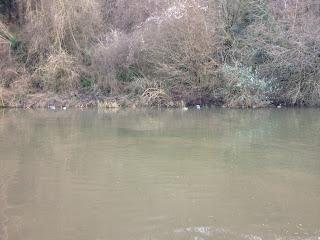