Just a quick note to say blogging will return this weekend as I am fishing the Superleague up at Newbridge, apparently it fished well Sunday just gone.

I have just returned from 2 weeks in Florida (Orlando) where my fear of heights was put to the test by several, well about a dozen roller coasters. On one of them I lost my Sensas cap and it now resides in Sea World Park, I actually saw it sitting upright and wondered if I could claim sponsorship from Ian Parsons for advertising Sensas, lol!

Martyn Woodington was also over in Florida, but he was by the coast and went fishing most days. From the emails I got from him it appears he didn't catch much other than a few small catfish and bass, and he was more likely to foul hook a dolphin or manatee. As for me I didn't bother fishing for silvers I went for the vermin, see photo below of my gillie handling my catch. 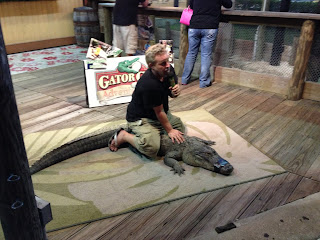 If you like your thrills and hot weather get to Orlando it really is an amazing place. Next time I would like to head for the Keys and some proper fishing!
Posted by Tim Ford at 17:46