It seems quite a while since I have wet a line although it was only a couple of weeks. I wasn't even sure I would be going this weekend due to the mother-in-law still being in hospital, but by Thursday it was decided I would go. I fancied a bit of maggot fishing but both Harescombe and Hill View advised me their matches were fully booked. Tony Rixon advised me of the Avalon Fishery Xmas match and so I called Vic Bush and got in.

Set the alarm for 6am Sunday morning, and it was pleasantly mild again as I loaded the car. I got myself to Shipham for breakfast where there were plenty of anglers already tucking in. One of them was Craig Edmunds who told me 10 years ago the birds were all over him, now he said he can't pull a bird for toffee! After a bit of banter I was on my way again and got to Avalon with time enough to get all the gear out and onto the trolley. Vic announced he was paying the top overall weight and the top silvers weight only, with all the other money gone into the prizes. Not a clue where I wanted to draw and so when I stuck my hand in the woolly hat and pulled out 32 I was looking for advice. Most people said OK but not really where the main carp weights had been showing. That said what I do like about this venue is that you're never sure of where it will be won.

Got to the peg and passed a couple of top class anglers on the way, James Cooper and Tom Magnal who would be hard to beat. I had plenty of room to my left but a tree in the water made it tricky to take advantage of the space, the next angler to my right was Phil Dodd on peg 30. The lake was flat calm at this stage but the forecast today was for some wind and showers. I had a little island opposite me but was advised to avoid fishing to the end due to snags. 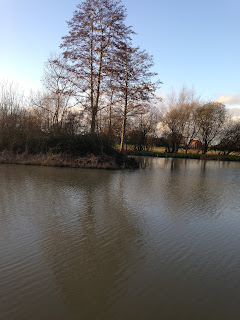 I set up a 10ft Preston mini carp rod for the straight lead with a 16 PR36 to 0.16 for fishing a hard pellet. I also set a stumpy 5AAA waggler just in case the wind stayed OK with again 0.16 to 16. Two pole rigs were assembled, a 4x20 with 0.12 to 18 PR434 for 13m and 8m, also a margin rig with a 4x14 to 0.16 to 16. On the all in I fed some micro pellet at 13m, some 4mm pellet int he margin and pinged a few 8mills out to the island and to a spot in the open water. As the wind had picked up (why does it do that?) I chucked the lead out to begin with and hoped I'd get a lucky resident carp. It didn't happen for me but in the first 30 mins I think I saw 3 carp landed on the tip. Without a sign I had an early look on the 13 micro line, but after 20 mins here trying soft pellet or maggot I was still waiting for a bite. On the other side of the lake on peg 19 Mike West had lost 2 carp from his margin, so I took a look in mine, I snagged up every time here so I plumbed up a little further out and refed it.

Back out on the lead and bang on the hour mark the tip flew round, a small carp of about 2 1/2lb was landed. I cast back out with renewed hope but it seemed like a one off as the tip stayed still. Everything was quiet and from what I could see nothing much was happening, I decided to start throwing maggots by hand out to about 8m hoping to draw a few small fish and maybe a carp or two later. Around the second hour mark the wind dropped a little and so I decided to give the waggler a little go, throwing it out with an 8mm pellet on I wasn't sure what would happen. The wind was still a pain but on my third cast I had a bite but didn't connect. I then took a call from Glenn Bailey and wedging my phone in my hood (as it was now raining) I carried on with the wag and after a few minutes had another bite and hooked one. This fish wasn't massive but it was fighting a bit weird,when I did net it I could see why I had hooked it under the chin, it was about 4lb. I gave the wag another 15 mins and lost a fouler when I never even had a bite, but the wind then got so bad I had to stop.

The lead was not working for me, and I seemed to be reeling in twigs most casts which is not what you want. I tried the 13m pole line again but nothing and I never did have a bite on this all day! Dropping in on the 8m line with double maggot I was happy to see the float go under and pick up a 4oz hybrid, not long after I had a 4oz roach. A few more smaller roach and then time to rest it as bites were really at a premium. Three and a half hours in and I had another pull round on the tip, I'd cast a bit more to the left which seemed to avoid the twigs. This carp was safely landed and was about 4lb. Again nothing else and I felt the carp were up in the water but I couldn't fish the wag as the wind was a nightmare. The maggot line produced a couple more small roach and then I bumped something, maggot over the hook, damn. Within a few minutes of doing this I had a positive bite and caught a 1lb+ skimmer. I then went without a bite for a while but I felt there might be a better fish and stayed on it, I was proved right as hit a bite and a decent amount of elastic came out but after about 6 or 7 seconds it came off. There was no reason for it, but this is the way things can go in winter with fish not feeding positively.

Everything went dead after this, and even when the wind did drop a bit the wag only produced 1 indication. Mike West had now lost 7 carp from his margin (none in the net) and I decided to give mine the last 30 minutes solid. With about 15 mins to go I had a proper bite and was attached to a very good fish, I pulled steady thinking it would just swim out in the open water. Bad angling on my part I didn't see where the fish went and should have pulled a lot harder, it got near the next pallet and I was snagged up solid. It turned out the carp had put my hook into a piece of wood (an old part of the platform) which was about 3 foot below the surface. Gutted it felt a proper un, and I never had anything else. As the match ended the wind dropped, why does it do that?

Matt Challenger won the silvers with 8lb 4oz, this was mainly made up of two decent bream.

Vic and his wife had put on some lovely soup and bread, and home made mince pies. The prizes were also top notch with rods and hampers for the top performers, I was really chuffed to pick up my prize, kept the wife happy too! 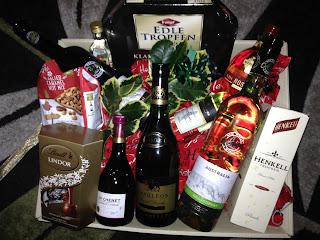 Well that is it now until after Christmas, not sure when I will be going again as I do have a busy Christmas hol, hopefully I'll sneak out at some stage. Anyway here's wishing everyone a very Merry Christmas, hope you have a good one and drink eat and be merry.