Spent a few days with the family in Dublin this week, and we had a great time visiting some famous places and bars, the Guinness was good but bloody expensive. I enjoyed my visit to the Jameson whiskey distillery and got a certificate. I had a txt from Tony Rixon asking if I'd like to fish this match as a reserve, so that was Sunday sorted then. I did not get back home till late Friday night so just a few hours Sat to sort my gear and then out on the night for a stag do, great prep then lol! 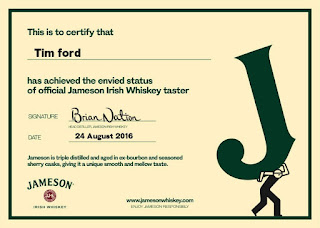 Luckily for me the Stag do was a bit of lightweight affair and I was in bed by midnight and so waking up Sunday morning I was feeling fine. Forecast for the day was for a few showers and so I packed the bib n brace and coat but didn't feel the need for the brolly. Steady journey down though I did go through a nasty rain shower, and I arrived with plenty of time to spare. The match was pegged on Carey and Campbell, and I hoped to draw a peg on Campbell today and if possible fish for the silvers, I managed to pull peg 125 on Campbell. This peg had won the match the day before, so some carp in the area then, and now what to so about the silvers, hmmm.

Got to my peg and for company I had Mat Toomes on 123, Glen Calvert 124, Dave Roper 126, Steve Skelton 127 and on the spit was Craig Edmunds, Fishing for second in the section then as Trig just keeps on bagging on carp! I set up a 4x12 rig with 0.14 to 18 PR36 to fish for silvers at 5m with hard 6mm pellet. A depth rig for 14m and shallow rig for fishing 8mm pellet, lastly a rig for the margin over gbait but I never had a thing on this...

I was already for the start and had just put my keepnets before the all in when I heard a hell of a splash, Mat Toomes on peg 123 had fallen in the lake and taken his box with him. As myself and Glen pulled his box and helped him out of the lake we heard the all in shouted, though I'm sure I might of heard "FALL IN". I left Mat to lick his wounds and sort himself out, he was soaked from head to foot, had lost his glasses and his iphone. He managed a smilethough for the camera. 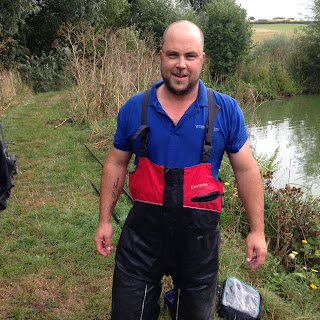 I started the match fishing a 6mm pellet in the band, I fed a dozen of the same pellets and the float flew under, carp, bugger. Hook length snapped on the first drop in, put another on, went in again, fed 12 pellets again, hooked a carp again!!!  This one was fouled and I pulled out of it so no loss of hook. For the next 30 mins I tried to catch at 5m but I had nothing, not a fish, so I continued to feed here but went out to 14m where I had been feeding 8mm pellets by catty. Going in on the depth rig I had a couple of liners and lost a fouler but just before the hour mark I had my first fish, a carp about 8lb. The wind was awkward and I felt the carp were up in the water, so I tried my shallow rig but had nothing on this after 20 mins of trying. Back in at 5m and just a 4oz skimmer for my efforts and things were not going well. That said not much was being caught around me, other than Trig. Glen next to me had some small skimmers and despite getting bashed up by the odd carp stuck with the silvers,

Going long on the depth rig yeilded a 2lb skimmer but a number of liners and a fouler, and the carp were off bottom for sure. I tried slapping and that was no good at all, I looked across to Dan White on 118 who was getting the odd fish shallow, he was swing the rig out past the pole, so I changed my rig to a swinger and gave that a go. Over the next couple of hours I did manage about 6 carp shallow, so slow but better than others around me (except Trig). Then from nowhere a heavy shower appeared, but it wasn't a shower, it was a bloody monsoon, and heavy rain fell an hour or more. This killed my shallow line stone dead, and I couldn't get bites anywhere, and I was just like Mat Toomes soaked head to foot.

In the last 90 mins I started to get skimmers and odd carp on my 5m line and enjoyed a nice steady run of fish to the end of the match. My only hope of coin was that Trig would frame and I would get the section by default. Well the first part was nailed on as Trig won the match with 230lb, the rest of my section as it turned out struggled and didn't break the ton, so my 18lb of silvers and 103lb of carp did get me 2nd in the section and a default pick up.

Steve Tucker ran Trig close and ended with 223lb from peg 132 in the corner, and on the other side of the spit Tony Rixon got 3rd with 196lb. The silvers was won by Paul Faires on peg 111 with 34lb, he just beat Glen Calver who had 32lb.

The league was won by, you've guessed it Trig, more details on Tony's blog.

Well all the gear is soaked, my car is soaked, but I am still not quite as wet as Matty who went in the lake after the match and managed to retrieve his glasses and his phone, Fair play to him! 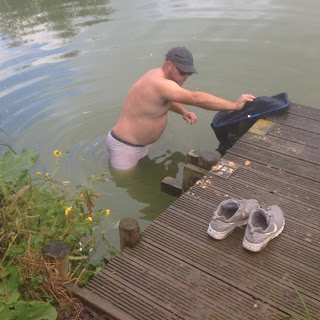