Two weeks since my last outing which just so happened to be at Lands End. Last weekend was a long day out Saturday at Rovers hospitality which ended up in the Essex pub where I fell asleep. After a CT scan on the Sunday I never felt quite right all week and on Tuesday I felt quite ill and my bowels were upset. I ended up staying in my sick bed Weds and Thursday and was wondering if my volunteering to stand in for Shawn Kitteridge was a good idea. Friday I went back to work, and had an eye test as my vision out of my right eye keeps going foggy, it transpires I've something called "floaters" and a big one causing most of the issue.

Saturday was spent making up a selection of rigs and hook lengths to cope with a draw on one of the three lakes at Lands End. I did not bank on a disturbed night's sleep as I had developed a bad cough after being ill, suffice to say I was still tired when I got up at 6:15. The rolling draw had already started when I arrived it seemed, and recent favourite peg 13 on Match lake had already gone to Bob Gullick, and that was the lake I would have liked to have drawn. I pulled out peg 34 on Speci, and was greeted with lots of positive comments. Tony Rixon told me how he had caught on it a little while ago, but I was also warned it had been quite poor at times in the league.

I set up positively with carp in mind. To the right of me on the island was a bush in the water, I would fish on top the shelf with pellets by it, and in front of it in the deep water with meat. 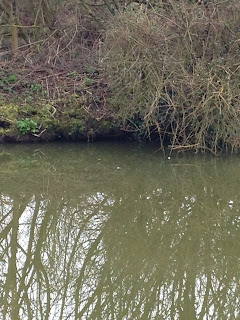 To the left of the island there is a tiny bush and by this I would fish again on top the shelf, and back short of it and left in the deep water. 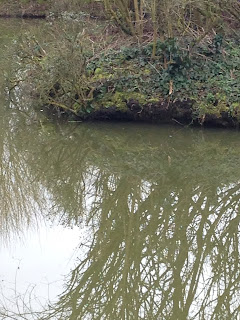 My section had Nich Chedzoy up on peg 25, Martin Reyat on 31, Andy Hemborough on 32 and Steve Seagar on 33. I thought I would take it careful on the feeding front despite the mild conditions. A small ball of micro was fed in the deep water left, 6 pieces of meat and some casters deep to the right. I toss potted a few 4mm pellets in two spots across. I decided to have an early look across as I had felt a fish when plumbing up, first drop and I thought the float dipped and the elastic came out, but I was in a snag, but it came out OK. Next drop snag again, so I moved the rig a little to the left. No signs were forthcoming, so I decided to lift and drop the rig from the end of the island up to the bush to look for the fish. Literally as I got into the middle after about 30 mins I had a bite and carp on, it was off after 10 seconds fouler. Nothing else across so I tried the deep lines, the soft pellet line was dead, and in fact 90 minutes into the match I had lost 4 foulers in total and had one tiny roach to save the blank.

At this stage Nick Chedzoy was top with 4 carp, and Steve Seagar had taken two from the end bank, and Andy Hemborough had one or two and I think that was it for carp. Two hours in  and I hooked a carp off the end of the island on a 6mm pellet shallow, this was hooked in the mouth and soon pooped up in the net at about 7lb. I thought this might herald a run of fish but far from it, it signalled a quiet period, if it could get any quieter!

Andy over on peg 32 then had a good spell catching on his end bank, Steve next to me had taken 3 carp but was now struggling for any indications. Two hours to go and I was bottom in the section, I dropped in on meat at 7m and within a few minutes had a bite and was into what felt like a good fish, but we shall never know as a couple of minutes later that came off, I never had another bite there.  I managed to hook another 2 carp right over and got one out again hooked in the mouth. Martin had a good run of fish on 31 fishing pellet across. With about an hour to go I had my one and only bite on the meat deep line to the right, it was a carp about 5lb.

Any thoughts of  good last hour were foolish, and I had nothing at all. Martin had a last gasp 12lb carp on meat and that was about it down our end other than Andy getting a few late skimmers and with some F1's too he would have a decent weight of silvers to go with his carp. In fact Andy won our lake with 56lb of carp (including one of 17lb) and 14lb of silvers, Martin next to him had 58lb of carp and Chedz had 30lb, that was the top 3 on the lake. Steve next to me had 3 carp and 1 roach for 18lb 1oz, I had 3 carp and 3 roach for 17lb 10oz.  As you can only win one prize the silvers was going to default, and that went to Paul Elmes on peg 37 who had 2lb 5oz (mainly one perch). He never had a carp but lost 3, my neighbour on my right Jason Radford also lost 3 carp and had one tiny roach.  To say Speci had fished hard would be an understatement. I had only had about 12 bites / indications all day, and I felt there was never more than 1 fish in the peg, just odd carp that swam through.

I wonder in hindsight if I had gone lighter on my soft pellet rig and had set up a light caster rig I could have won the silvers by default. I am sure I could, but the thought of a couple of pounds of silvers winning coin never occurred to me at all.

I don't know the full results as I shot off pretty quick, but I know Bob Gullick won on peg 13 with about 157lb, and Nick Duckett was 2nd with 120lb+ from peg 7. I'm sure Ken Rayner and Tony Rixon will have the full details.