Back on the Bristol Avon - Kelston Straight

This week it is my youngest daughter's 21st birthday, and on Saturday she was off to London to watch a West End show with her mum. This meant I would be all on my own and as soon as I had dropped them off I could go fishing. I had been watching the river level at Saltford all week, but for the last few days it had only very slightly dropped and this meant that float / pole fishing would be difficult. However, I really didn't want to chuck the feeder as I was sure the roach would play ball, in the end I thought Kelston Straight just above the Jolly Sailor pub would be a likely place.

I had 2 pints of caster and 2 pints of hemp from Scott Tackle, 1/2 pint of maggots and a little tub of worms. This with my Groundbait should do for a day's roach fishing. I finally got to the river about 9:20, the top end was a bit pacey and so I drove down to just below the big willow and here the river still had some pace but was easily float fishable. At this stage there was no wind and it looked pretty much perfect. 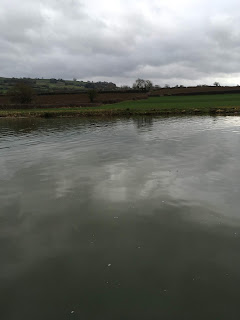 Looking down towards the weir the Environment Agency were doing some work, think they were clearing / repairing the barrels above the weir to stop boats going over. 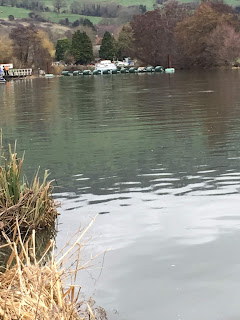 Fishing a pole here is possible but because of the road behind you have to ship very close to the river and I didn't fancy that, with no wind I elected to set up my 18 foot rod with a 6g Bolo Float. A 20 to 0.10 was put on for starters and I had the hook a good 3 1/2 feet away from the bulk. I started off by throwing just three tennis balls of groundbait containing casters and hemp. Gbait today was Sonubaits, black, river and lake, and a little bit of brown crumb. I guess I was fishing about 14m out, though the beauty of the rod was I could cast closer and further out. It was a bite on the first cast out, a little 1oz roach, and a bite on each cast after. After about 10 mins I had a bit of resistance and up popped a little chub of about 8oz.

I was getting a bit every cast, and to keep the bites coming I was throwing a small ball of gbait out every 10 minutes and throwing the odd big handful of caster and hemp out. It was all going nicely, and I had a roach of nearly 10oz, then Glenn Bailey came out for a watch and in his words I was bagging. Then all of a sudden the wind got up a bit and started blowing downstream and was a pain, and it certainly affected the presentation and bites became a little harder to hit. Glenn went and I was left on my own (the only angler on the bank) with just the odd biker / walkers for company.

I suppose about an hour later the wind had got really bad, and I was not getting decent presentation even though I was casting and feeding down the peg. A spell fishing well over depth and trying to get the rig to slow down worked for a while, but if I came in to close I would hook a snag, willow branches, and I lost of couple of hooks and took the opportunity to go up to an 18 to 0.12. About this time I hooked what I thought was a chub but then reeled in to find the hooklength snapped and guessed pike. Sadly I was right and the pike bit me off another four times before it seemed to get a good hold of my fish / hook. I played it (it played me) for a good 15 minutes and never once did I see the float and it was a big pike of that I'm sure, of course it bit me off. The good news was that I must have gave the pike the hump and for an hour I never saw the bugger. The wind was now very bad, so much so at times it was hard to hold the rod. The fish were still there, and I had caught in spells on maggot and caster on the hook. For the first time though I was struggling, the fish had seemed to have disappeared from the gbait and the only bites were a long way down the peg from small roach. I cut the gbait out completely and upped the loose feeding to every cast. This worked a treat and I was soon back into some better roach, below the gbait.

The poxy pike came back, and by the end of the day I had ran out of hooklengths. The wind dropped and I started to shallow the rig up and caught well for a while right up the peg and back over where the gbait had gone in earlier. The wind got up again and it just made things a bit more tricky, but it was still a bite a chuck. My last cast was decided when the pike bit me off again.

There was nobody around to take a photo of my catch, so I did the best I could, certainly the net felt really heavy at least 20lb maybe 25lb. Had I fished the pole I expect 30lb would have been easily attainable, but I do like catching a few on the rod. Some pics I took below. 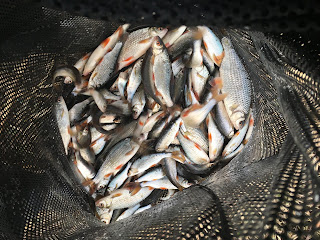 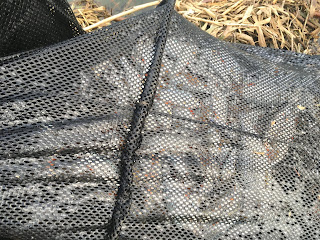 Let's hope the river stays in good trim till the end of the season, not long left now!
Posted by Tim Ford at 19:38