It's too cold for fishing for me!

As I'm not as mad as I used to be I decided not to bother this weekend, mind you just getting out of my road (ice rink) would have taken an effort! So I guess today might be a good time to reminisce, and as I have often been asked how I started fishing that's what I'll explain.
I grew up living on a small farm which had a small brook behind it that flowed into the Bristol Avon which was some 500 yards away. At an early age I was always digging around in the stream with a pond net, stone loach, bullheads, elvers and would you believe flounders were the main species I'd catch. Around the age of 11 of was given one of those "catalogue" 6ft blue rods and an intrepid reel, I was now able to hook fish for the first time. The pet shop in Keynsham was where I'd get most of my terminal tackle plus loads of hand me down floats. I used to go to the river with mates from school and I guess we spend a lot of time ledgering and would catch eels and odd gudgeon but not much else. I had read basic books about fishing so understood how to rig up and what species looked like, but I had no idea about tactics for them.

It was probably when I was about 14 that I was given a 14ft rod (later nicknamed the beachcaster!) which meant I could finally cast further distances. A couple of my class mates were getting better at fishing and a neighbour was taking them fishing and invited me along. This was a fun time and I started reading the Angling Times which was giving me more info on floats and shotting patterns. I still knew very little but I was now catching more species, even the occasional bream at Jack Whites. Bitterwell Lake gave me my first Tench on ledgered cheese and I started to go here more and more. I couldn't play fish and so when I hooked a carp always lost it as I just hung on for dear life! But watching those around me bag up I learned, and eventually I landed my first carp at 6lb (off the road bank on an onion float on the edge of the lillies).

I was getting to like this and was visiting more venues all the time which really excited me. Around 16 I joined the Silver Dace juniors and then realised how little I knew! Mixing with anglers such as Mark Holbrook and Clayton Hudson I got battered but learned loads. I had bought a ledgering rod (with screw in quiver tip) so I could set up 2 rods in the matches, but I never did any good although I did get to catch a lot of fish, but during this year I improved tremendously.

I then had to move up to the Sliver Dace Seniors and was again getting battered, all the matches back then were on the Bristol Avon and I was pleasure fishing Monday, Tuesday and Wednesday nights to learn more. I was still fishing with my mates and as there was a close season we used to travel Exeter to fish Upham Farm and Hogsbrook Lakes. Hogsbrook was much harder but more picturesque, here's a picture of a mirror carp I caught, just look at the clothes! 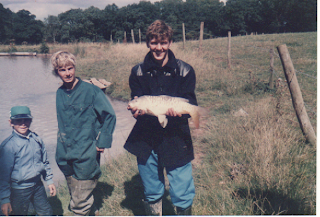 At this stage I was entering matches with a wicker basket, and the two previously mentioned rods. Nothing wrong with that I thought but I got some serious stick from the other lads about it, trouble was I didn't have enough money to buy anymore gear so I just carried on. It was then I was picked for the Silver Dace B team for the Angling Times Winter League and I was now seeing top local anglers for the first time and once again seeing a different level in the sport.

I'll talk about how things went from here another time, and how I eventually won some coin!
Posted by Tim Ford at 10:54