You need to get help when you're learning to fish! 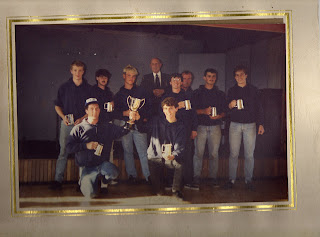 I was now taking part in my first ATWL match which was on the Bristol Avon around Limpley Stoke to Barton Farm (Bradford-on-Avon). I had no idea of the format or how to get to the venues, let alone the right methods! Lucky for me I was drawn at Barton Farm and this meant I could walk to my peg from the car park where the draw had taken place. I was told that it was hard and that a waggler across and groundbait feeder down the middle were the best tactics. So off I went following everyone else, excited and nervous as I did not want to have a bad result on my first team match. Halfway to my peg the carry strap on my wicker basket broke, but I managed to get to my peg by holding the end of the strap and the basket handle together. Two hours into the match and all I had were two pairs of lips, my zorro striking on my beachcaster float rod had pulled the lips off a couple of small roach. Onto the feeder and my white screw in quiver tip was bent double and I landed a 2 1/2lb bream!
During the match an angler walked past me and asked how I was doing, when I said I had a bream he replied "oh you've spawned a bream!". That was out of order I thought, I worked hard for that fish. It turned out this angler was Melvyn Holbrook of Bathampton (sadly passed away some years now) and he later told me my gear and clothes labelled me a "noddy". He won my section that day and when I asked him how he caught he told me everything. Melvyn was an absolutely brilliant river angler and a true gent, I watched and listened to him as often as I could.
I ended up about 7th in my 14 peg section as I recall, and was happy with that. On the walk back to my car the other end of my carry strap broke and I had to carry the wicker by hugging it, not easy!

In the same ATWL series that year I drew opposite the boathouse on the Bristol at Newbridge. The river was in flood and I was dreading it (nowadays I love it!) and I guess that was why I got to the draw late and missed the pools. Pegged either side of me were Jim Thomas and Pete Sivell (again I didn't know them then) and Jim walked out into the river which amazed me at first. Jim knew the peg well and knew that he could just walk out a couple of yards and then drop his feeder straight down into a deep slack. I fished the groundbait feeder all day, I had no worms, and only white maggots, the quiver tip was bent right round due to the flow and I didn't know how I would see a bite as there was a lot of rubbish hitting the line. But with about 30 minutes to go I saw, what seemed to me, a different movement in the tip and struck. I was into a very heavy fish and played it for about 5 minutes before it came off under the rod tip, I never even saw it and was absolutely gutted. I blanked. Jim Thomas won the match with 4lb and Pete Sivell had one gudgeon. Jim came up to me on the bank when the whistle went and said to me that by the look of the bend in the rod that the fish I lost would have beaten his weight. He also told me the rod I was using was all wrong, to short and pokey, and showed me the difference in the rod he was using. Two weeks later I bought a new feeder rod and a new float rod in the sales! Again another senior angler, Jim, had taken the time to help a young upstart like me, and the generosity of people like Melvyn and Jim was a real boost to me.

In my second season of the seniors I won my first match, at chequers straight from the cow drink peg. I had a few chublets on the waggler and some skimmers on the feeder for 13lb. I won £30 (nearly a weeks wages for me) and ran all the way home! I had now bought a Riva box and was gradually feeling the part.

I started to get a few pick ups and in 1987 I was picked for the Team Bristol Amalgamation Intermediate National side, although there were a few people unhappy with this I must thank Andy Britt for sticking with his decision. The match was on the river Trent and I had 7lb 8oz, this gave me 29 out of 35 points. I was the last person to be picked up by the minibus and as it rounded the corner they wound the window down and asked how I had done, when I told them they went berserk and started shouting and cheering! We'd done well then I guessed. Kev Winstone told me later that he said on the way to picking me up "if that Farmer has done bad were leaving him behind!" The tension at the results was unbearable and we were all pacing around and feeling sick, the organiser kept us guessing as to the result right to the end, but we won it by 1 point from the odds on favourites Derby A. I can honestly say this was an amazing day and felt brilliant and we did celebrate a bit. The photo above is of the wining team; from back left Martyn "Woody" Woodington, Mark "logger" Bailey, Kev "Rock" Winstone, Andy "Gob" Floyd, Roger Amos (manager), Mark Holbrook, Paul Benson, Andy Britt and yours truly. Here's the article from the Anglers Mail which was my first appearance in a weekly magazine. 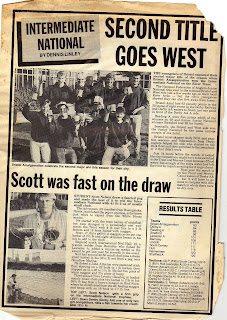