Cidered off me 'ead!

On my own this week for the journey to Cider Farm, as Glenn decided to grab some more money by doing overtime. Well he said he had to go in and finish the job but it wasn't long before he was calling me to ask where I had drawn!

It was great to see Bill Milton back fishing after his illness, he seemed a bit quiet in the morning and not himself, but by the end of the day he was back on form, more of that later.

I had a bad day, and I guess it all started when fishery owner Mark Gibson told me we were on Dabinett. It's not that I don't like this lake (although my preference is Yarlington) it was simply that when I booked it was on Yarlington and so I did some rigs up for this venue! I knew that a good draw on this lake was a must as the gaps and end pegs had seen most action in recent matches. Drawing peg 19 was not really what I wanted, but it did have a big bed of reeds opposite and peg 18 was empty. As usual carp were showing well in the gap and in reed beds but the bright sunshine told me to forget a big weight today. I set up rigs for right across ( 2 lines either side the reed bed ), in front the weed bed in the deeper water and in the margin toward peg 18.

It was a slow start for virtually all, but the lad on peg 16 was into fish quite regularly. After an hour I had only 2 carp from right across, the reed bed deep swim having failed to register a bite! The guy on my left had a couple more fish than me but other than peg 16 the action was slow. I had taken both my fish on hard pellet and was catapulting pellets across to both swims regularly. Odd fish would move but not stay around for long, and if I did get an indication it was invariably a liner. I tried altering the feed and potted for a while to try to get the fish in more of tighter feed area. Initially it seem to work with a few more liners and 2 more carp in the net, but it was short lived. The guy on my right had lost nearly every carp he had hooked in the reed beds, and was making rigs, I was only one hooklength down. I was Preston hollo 19 after a couple of fish losses and never looked back, although it wasn't tested very much!

The anglers in the gaps were now getting the odd fish, not bagging but more than me, and it was becoming an uphill battle. However, half way through I hadn't given up as I knew if the fished moved in an hour or so bagging could make the frame. Glenn had rang me a couple of times, and when he rang me with an hour to go I was only on 5 fish and he could tell I was hacked off. By now the guy to my left, Derek Cullip, had been catching for half hour, the carp had moved in his peg. I asked him to let a few swim past towards me and I did manage two more. I tried the inside line a lot more than usual but it only produced one liner and with 20 mins remaining I waved the white flag. I watched Derek to the end of the match and checked out his tactics. He was doing the same as me feeding with a catapult and potting a small amount to the far side on both sides of a reed bed, although he did use soft pellet on the hook. The good last two hours meant Ray ran out winner with 69lb, Ray Bazeley from peg 7 was 2nd with 50lb odd, Ray caught in the deep water on paste and just beat Martin Lenaghan off the next peg. The lad on peg 16 struggled in the 2nd half of the match and ended with 45lb.

Here's Derek with some of his catch, when asked to smile I said show us your gums, if you meet him you'll understand! 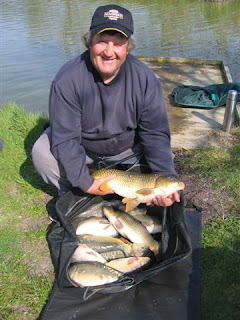 Jess Jordan of Enterprise angling was the other side of Derek in the gap, he was getting some action but from the amount of swearing it was obvious he was loosing a few. Later in the match he got into a bit of rhythm only for a section to crack and 10 metres pole lay in the water carp on the other end! Thanks to Derek's help the pole was retrieved and Jess played the carp to the net for it to come off! More swearing and I think Jess lost the plot, he had 43lb and was not fourth but not far off the top 3.

The end of the match was funny, people shouting all out at 4pm, but Ray and Martin shouting we're finishing at 5 mins past, apparently Mark told them this but nobody passed the message round! Bill Milton, who had travelled down with Ray and Paul Haines, started to wind Ray up about this shouting obscenities from the end peg. Somehow Bill managed to get, Rolls Royce, Unions, Labour, Tony Blair and Homosexuals into his verbal assault on Ray. The two lads to my right were in absolute fits! But mostly I was pleased to hear that the Bill I knew was back on form! I hope he's looking after his good lady Mary (she had a soft spot for me!).

Martin Alexander was on peg 22, and carp were waving at him from the reeds, but getting them feeding was not easy and he like me chucked back about 20lb. Martin complained that the midges were feeding on him and he never used to have the problem when he smoked. I retorted that I had no problem (I don't smoke) and perhaps it was because the midges saw Martin as a "big" target! I saw Martin in Avon Angling recently and we got onto the subject of healthy eating, Martin said he does eat healthy meals and I quote "last night I had sausage, mash and vegetables round a friends, that was a healthy meal. But when I walked home I stopped in the chippy for chips and curry sauce." Top bloke Martin!

To sum up this day, the fishing for me and many others was very tough and it's never nice to have the winner next door. However, there were some good laughs and having a radio on to listen to Jenson Button winning the Grand Prix kept me awake! Three bottles of cider were waiting for me in the fridge at home so I monked off early.
Posted by Tim Ford at 18:49