Family duties turned into a days fishing on Friday, as an outing to Longleat gave me the chance to fish. I was a bit slow getting going on the morning thanks mainly to the beers I had the night before with Bob Sheppard who was 50 years old, thanks to Glenn for giving me a lift home!

After finally arriving at Longleat (due to a road closure I took the wrong road and then there was the queues), I was pleased to see a few empty pegs on the bottom lake. The wife (who had only moaned a bit for me getting lost) and kids left me and headed of to find the other families and I settled in to a swim slightly left of centre. I intended to fish chopped worm, caster and corn as I had all these baits left from the Huntspill. I've fished this lake a few times before and know it to be very shallow, 6 mtrs did for me with a 0.3 grm PB Inter float, and 0.16 direct to a 14 B911. I also set up a 2 swan Corby pellet wag. I began by putting in a full big pot of caster, worm and corn, and it wasn't long before bubbles appeared. However, my dendra was snaffled by 2 to 4 oz roach, so I put 2 dendras on still roach, 3 on and then it was small perch. This might be fun for Mike Nicholls but I wanted something to stretch the elastic, so on went the corn. This had the desired effect and a couple of 4 to 5lb mirrors were quickly netted. Bites were silly then so I re fed and caught another carp, then had to re feed again.

I then started to get strange slow bites, where the float would move slowly sideways like a line bite but only much slower. Striking resulted in nothing, till eventually I let one go for ages, then I came back with what I thought was a bit of debris. But no it was a bloody Crayfish, one of those American Signal thingys. I had another 3 and decided as I had been firing out 8mm pellets and mouths were appearing time for the wag. I slipped an 8mm pellet into the double band, I was using 0.18 to a 14 PR36, and had to wait all of 2 seconds for my first bite and carp on. Next cast carp, next cast carp, next cast carp...... It was a very good start, but after 6 cast I did miss a bite! I was feeding 6 pellets, twice and then casting out, if i missed a bite I cast straight out again, if missed that bite then I fed 6 pellets before casting out. This was how I fished for a few hours, during this time the wind got up very badly and was in my face and to the right, it caused me to miss more bites but I was still getting a bite every cast. (I even had 5 bream to 3lb on this.)

Two kids on holiday from Kent came and watched me for about an hour, one of them nearly broke my roller as he thought it was seat and sat on it! They played a game of betting how many seconds it would take for me to get a bite from the float landing, 4 seconds was the best bet. Later the wind dropped and things just got more hectic. I was now casting out and keeping the line tight to the waggler and the fish would hook themselves, in this way I was now casting then feeding. I have never had so many carp like this, and I have to admit that i was getting physically tired. 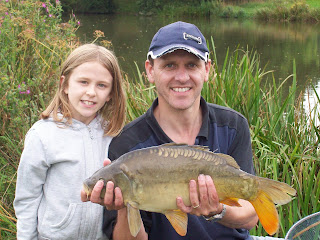 Finally the family came back, and it was time to go, but I wanted to show them how many fish were queuing up, the photos show the last two fish caught by my daughters, Lucy (below) had the first one about 4lb, Emma (above) had the last one and was nearly dragged in by this 8lb fish! As I type this post my arms and chest are still aching, as I had in excess of 70 carp betwwen 2lb and 9lb, and by the way I got all the way to 33 carp before I had to change hooklength, good hook that PR36. The only downside of the whole day was that half the fish had very bad mouths, poor angling and rule breaking have caused this, the evidence appeared when I retrieved a massive barbed hook with braid. I did tell the bailiff (a lady not Nick) that she should be doing tackle checks as it was the worst example of damaged fish I've ever seen. 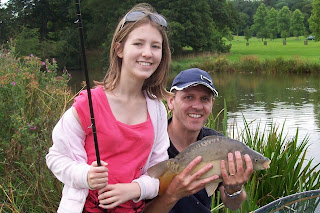