As previously mentioned, this match was supposed to be on the Trent, but an early decision was made to switch it to the Trent & Mersey Canal near Shardlow. The team went up for a practice and we went to a local tackle shop where we met Ivan Marks and he gave us some bloodworm and joker, the best we'd ever seen! Ivan gave me his home phone number and told me to give him a ring in the week after he'd spoken to another couple of local anglers for us. This was after Ivan had his first heart attack, and although he got out of breath walking from the car to his front door he still did all he could to help anglers.

We drove to a couple of sections to have a look and at one section there were what looked like some "travellers". Andy Britt got it in his head they would know something about the fishing and, much to our disbelief, decided to engage them in conversation! He then returned and told us they saw a lot of fish caught and saw people throwing lots of bait in, I think it might of been Kev Winstone who shouted "the Gypsy said ball it in!". Well we were all in tears of laughter and that phrase was repeated not only for the rest of the day but a good few years! The practice and chats with Ivan Marks brought a plan, feed one or two decent balls of joker inside and cup smaller balls further across, caster was to be used for any pegs with boats or bushes for chub.

The day before the final we met up in a small hotel, it was a long way from a pub, but we made the hike (I think Andy Britt had more stick for this as he booked the hotel on a recommendation from his Derby AA friends). We already had plenty of alcohol on board when we got back to the hotel but were still thirsty! Eventually the owner wouldn't serve us anymore beer but gave us a crate of bottled larger and he went to bed! That's when things started to get a little boisterous, someone decided to let a fire extinguisher off, soaking someone who was in bed (was it Mike Kent or Nick Tutty?) and then the thing went all over the hallway and ceiling. The owner turned up and was a tad unhappy, but he thought the wet walls were due to the beer chucked everywhere and I didn't think it was a good idea to tell him otherwise!

On the morning of the match there were lots of very sore heads, and breakfast was a hard thing to keep down, in fact a couple of them resurfaced in the car park! I had travelled with Kev Boltz, and we somehow got lost on the way to the draw. Kev was driving like a maniac, and we nearly lost it on a tighter than expected corner, then on a 30mph road doing at least 60mph a copper appeared with a speed gun. Kev slammed on the brakes and very luckily the copper just dogged us up and let us go. When we got to the draw the rest of the lads had the pools money sorted and gave it to me to draw a peg (they still thought I drew flyers!). I approached the organiser, Roger Mortimer, and he advised we were the first team to draw and didn't know what the others were doing! I pulled out peg 15, one off the end peg I thought, "you jammy git, that's the end peg!" said Roger, turned out it was 15 teams fishing not 16 as I thought. All of a sudden, this team of drunken river anglers had a chance and the adrenalin sobered a few of us up and we shot off to our pegs.

My peg looked great, with bramble bushes across, but the wind here was bad. At the all in I threw in two apple size balls of joker at 3mtrs, and cupped in 2 golf balls at 12mtrs. 12mtrs was as far as I could fish on my Silstar pole borrowed from Vic Bush. For me it was a tough match, catching just odd tiny gudgeon, perch and ruffe, but the runners had good news; Kev Winstone, after a shaky start and falling off his box due to the beer, was doing well and Mark Podge Jefferies was catching chub next to a boat (though Glenn Bailey helped his cause by walking around and asking the owner to switch off the engine). One of the funniest things actually happened to the runners, Paul Benson decided to swing on branch over this "little stream", the branch snapped and Paul fell in. Only the little stream was actually the River Derwent and Paul went right under and resurfaced way down stream, he was soaked head to foot.

I never did have a bite next to the brambles and more by luck than skill (the wind was blowing my rig around inducing bites) I weighed in 13oz, but I was amazed to learn that was worth 10 points out of 15! Kev Boltz picked me up and he had come 2nd in his section with 1 perch, and he told me Martyn Woodington had won the next section with 3 perch for 2 1/2oz! These were the only 2 really bad sections, and killed off many teams chances, but for us these 2 results were crucial. Podge framed and Kev Winstone won his section, and if I recall 9 points was our worst result, we absolutely pi55ed it off the lucky end peg! The winning team was (memory OK I hope) Kev Winstone, Mark Jefferies, Martyn Woodington, Kev Boltz, Andy Floyd, Mark Holbrook, Myself, and number 8 was I think Gary Bowden.

I have a picture of the squad around this time, although black and white we were actually in our famous blue and yellow quarter jackets. See who you can recognise! 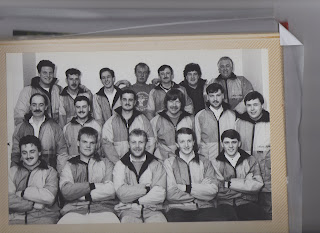