Cidered up at Cider Farm

Why oh why don't I learn, I'm over forty for goodness sake, I should know by now stick to what you know. What am I on about, well I thought a few quick pints down the Queens Head Sat night wouldn't go a miss, and I made the bad decision to drink Natch. I ended up arriving home later than planned, with the wife in bed and no front door key. Waking up Sunday morning with an hour less in bed and a bad hangover wasn't the way I wanted the day to start.

I eventually got to the draw at Cider Farm, I was the last person to arrive with about 2 minutes to spare and felt like shit (reminded me of being in me 20's again!). A bacon an egg roll and a cup of tea were my best hope of perking myself up as I stood at the very end of the draw queue. Last peg left in for me was peg 19, I have drawn this peg once before about 3 years ago when the carp were tiny and so were the reeds. Fishery owner Mark Gibson felt this peg had potential and had been under performing of late. Once I had managed to drag my sorry ass to the peg I found myself in a CARPS AC sandwich with Johnny Baker on 17, and John "Turkey" Thompson on 21. As I sat and surveyed the peg I didn't know whether to piss, puke or shit, but Mark has a rule that you cannot chuck cigarette butts in the lake so I thought I'd better keep my bodily fluids to myself. There is a point of an island only about 7 metres away on this peg, but I kept away from this as there were so many reeds I thought it would be a nightmare. So I fished at 14.5 metres to the right hand island where there was a small patch of bank that was clear of reeds, and at about 18" deep just right. A 4x8 bristle float of some description was used with 0.16 to a size 18 PR36 with a bait band for hard pellet. I set up a rig for 3 ft deep for nearside margin and across to left island by reeds.

On the all in I potted a decent handful of micros and some 4mm pellets on the 14.5m line, straight across to reeds, and RH margin. I fed the left margin with corn an pellet to see if it made any difference. Out to the reeds on the 3ft rig and as the reeds were knocking I was expecting a bite but all I got were liners and lost a foul hooker. I tried my 18" rig in here with a banded 6mm pellet and hooked one that did me straight in the reeds. That was enough of that, so off to the bare bank at 14.5m and first chuck hit one that still got into the reeds and I pulled out of it. I was on Hollo 15 so changed the rig onto the heavy yellow stuff and this was better. In the first hour I had 7 carp and lost a couple and was 1 rig down. I was catching on 8mm hard pellet and toss potting in micros and 4mm pellets, I would like to have used the catty but couldn't because of the angle and fear of bait going into the reeds. At the end of the 2nd hour I had another 7 carp and had trashed another rig.

The 3rd and 4th hours weren't so hot but I had another 10 carp and had another rig trashed. I had managed 1 carp from the LH margin but the RH was dead and this never produced anything. By now I was just about losing the acid taste in my throat from the Natch and feeling a tad better! The last two hours were very hard, I started a new line at 16 metres up to the left but this produced just 3 fish and with 1 more margin fish and 3 from the 14.5 metre swim my match finished. I thought I had done OK because I could see those around me had struggled and on peg 41 Rich Coles had gone home. I weighed 66lb 8oz and this was good enough for 2nd overall, well beaten by Brian Slipper on peg 54 who weighed 92lb. Brian had caught up the shelf the same as me but he told me that he had a poor start and was flying in the last two hours. Steve Howell was 3rd from peg 4 with 52lb and yep he caught the same way. The only person to buck this trend was Derek Culip who had 48lb 14oz for 4th all his fish were caught in the deep water (this peg produced 49lb last week). Mark took a picture of me smiling with my fish, the smile was mainly due to the fact I was happy to have lasted the 6 hours! 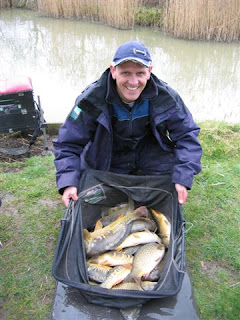 Ron Hardiman drew the in form peg 30 and chucked back about 20lb (he was between Derek and Steve Kedge who also had 48lb, I'm sure Tony Rixon won't mention that when he sees him!)

I'm back at Cider Farm again next Sun, and with Glen Bailey picking me up I will be on my best behaviour the night before. Plus I don't want to feel knackered like I am now writing this.
Posted by Tim Ford at 19:54