I was back to renew my acquaintance with Avalon, I hadn't been there since Jan when there was ice on the lake! I gave a lift to Warren Bates and he was impressed with the first part of the day (not me being on time) his first breakfast at the Fountain cafe. We arrived at the fishery with plenty of time to spare and so walked around the lake with Nigel Bartlett, straight away we saw a problem. The lake was clay grey in colour and whenever this is the case it usually means the fishing is hard. With the whole of the match lake being used I really wanted a draw on the left hand side (shop side) which had a favourable wind, but no, I go and draw peg 26. This peg is two up from the corner and I have seen many an angler struggle off it, then Warren comes and tells me he has drawn the corner peg 24!!!

When I arrived I was pleased that Tony has given me an empty peg either side, whereas many of the better areas had every peg in, I hoped this could help me. At this stage the wind was not to bad and so I set up a 4 swan pellet wag with 0.18 to 16 PR38, and a method feeder for the island chucks. I settled on 13mtrs for the pole as the wind could become a problem, a paste rig, a banded pellet rig on 0.6gm PB Inter 2 with 0.16 to PR36, and a soft pellet for skimmers in case I had to fish for them (but it never got me a bite)! I discounted the margins as I never seem to catch in them, but I did feed at 5mtr for paste which I didn't catch on!

I was not quite ready for the start as I needed the toilet, but then cupped in half a small Preston pot of 6mm pellets at 13mtr and started feeding 8mms to the island. I always start on the pole here hoping for an early carp and I started on paste, on my first drop I had what I thought was a liner and lifted into a foulhooked skimmer. Twenty minutes later I had my one and only bite on paste from a near 3lb bream. About this time Warren snapped his no4 section on his Tournament. One hour in and I had not had any other signs on the pole so I picked up the wag. The wind was a problem and I didn't land many casts on the money and after 45 mins I had not had a bite on it! Generally if there are a few fish feeding you do get indications, so I had to come off this, but what next? The wind was worsening and so I thought the method would be the best bet, I had to soak some micros first though and so I went back in on the pole. Just as Glenn Bailey rang me for an update I had a 2lb skimmer on 8mm pellet, but no more bites came.

Onto the method and I was pepped up when it went round first cast, the culprit a small carp of no more than 3lb. It then went quiet, and I was not sure the method was right as you cannot use short hooklengths or tuck the bait. After about 30 mins the tip went round again and after a very brief tussle the fish swam into a snag and I lost the lot. I set it all up again but it did not work. I was now fairly hacked off with my lot and the wind was now horrendous blowing all over the place. I thought I would stick to the pole in the hope of some more skimmers and have a chance of the silvers money. It wasn't pretty trying to hang onto 13mtrs of carbon, I had to lay quite a bit of line on the bottom to keep the rig still. Then with 2 hours to go I caught a skimmer, and then not long after a carp. Then the wind eased for a while and I could feed more accurately with the catty, now the swim started fizzing! I then had 2 more skimmers and 4 carp up to 10lb. Then at 5:05 I hooked another near 10lb fish, I landed it with 2 mins to go, dropped the rig back in and it went under within seconds, carp on "All out". It was about 5lb and a nice way to end the match.

Picture of my carp net courtesy of Roy Garland at toppeg.co.uk 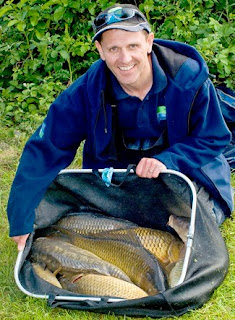 Tony Rixon walked round from the other side and asked what I had, I guessed 55lb and he said that might win it! As it turned out I weighed 12lb of skimmers and 49lb of carp and my 61lb was enough to win. I only just beat Phil (Fabio) Harding who weighed 59lb 9oz and so the last carp I caught was crucial. Tom Magnol was 3rd with 53lb 8oz from peg 20 just beat Dave Roper by 1oz. John Bradford had by far the best silvers weight with 23lb on the worm. (I was actually 2nd in silvers today too)

I'll be very honest and say that I could have packed up with two hours to go, the wind was really getting me down and there were quite a few swear words around. However, Warren had had a few in the corner and I know that the carp can turn up late but I wasn't confident. Just goes to show you should never give up.
Posted by Tim Ford at 20:37