It was not a nice start to the day with rain falling as the gear was loaded into Glenn Bailey's car. We were off to Acorn fishing a match organised by Tony Rixon that was to be a top set plus two sections.  Lots of bloggers were there and one of them ended up winning the match, but it wasn't me!

I got what was I was told was a good peg for carp, peg 10 and it was also right next to where Glenn had parked his car. Glenn was off to bridge peg 21. I was a little disappointed with my peg, in that I felt a bit hemmed in with every peg in from peg 7 to 12, to me it looked like I would struggle to compete with the other pegs has they had a lot of water to draw fish from (get my excuse in early). Of course we were all limited on the pole length so we would see what happened. Rigs today comprised of a 4x12 with 0.14 to a size 12 for meat down the margin shelf, a paste rig and a pellet rig for the long line, lol! I did also set up a caster rig for just in case the carp didn't play ball.

To start the match I fed a pot of 4mm pellet on the long line and fed meat by hand down to my left. Out with the pellet rig in the 6ft deep swim and it was going under but nothing was a bite, so after 5 mins I picked up the paste rig and had a carp straight away. After the first hour I had 5 carp for about 15lb, I reckoned on needing 30+ carp to frame so I was about on track. The 2nd hour was not so good at all and I added just 2 more carp and the paste line had gone very quiet on me, I tried the meat line more out of hope than expectation , but the float never moved. Glenn rang me to tell me had 15 carp and I told him I was not catching but Mike Nicholls on 12 and Fabio on 15 was. Then my peg and most others seemed to switch off, and during the next two hours I had 3lb of silvers only. It was really grim, Keith Masheder next to me on 9 was ahead of me and had taken the odd carp during the grim 2 hours, the Gimp on 12 had taken some nice caster fish, I was pretty fed up.

Coming into the last two hours the paste line came back to life with fizzing and plenty of bites / liners. I would like to say I emptied it, and whilst I did catch carp I never had it sussed, I missed lots of bites and pulled out of a few. Mind you Mash next to me was experiencing even more activity and was also pulling out of lots and at one stage he said he hooked 9 and got 1 out. I did manage to sneak 5 carp out on the meat, 4 of these came in quick succession with 90 mins left but then they fooked off! I ended the match frustrated, I never felt at any point that I was catching right, I didn't know if I was feeding right, the rigs were right etc. I basically have a lack of match 'fitness' and at present I am not in tune with my fishing, and most importantly I need to get my confidence back. I still enjoyed being out, and my 68lb was about 8th I think, but the peg was worth more in my opion. Mash had 90lb next to me, but even he was scratching his head at the end!

I'm here again on Sunday with a top set plus 3 sections match, I think the draw will be important and a peg with a bit extra water will be useful as every peg is in, including the old dog bone lake. Time to make some more rigs and have a rethink.

I should mention that for at least some of the day I was indeed sat on Cluckers peg, see below! 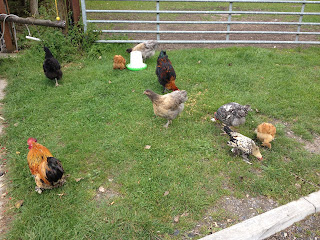