I decided to take a trip onto the river Wednesday (my birthday), just to set up a few rigs and try a few things out for a change. I had a pint and a half of casters with me and picked up some hemp from Nick at Keynsham Angling and that was it for bait, well I did have a bucket of dry groundbait but I was only carrying it for the exercise! I walked up the crane and settled on the cattle grid peg, I didn't really want to walk much further, and also I could see the wind was nasty around the boys hole.

A number of anglers have said to me that they believe balling in the groundbait brings more pike into your peg, the logic is that the fish are tightly shoaled over the gbait. I must admit I have not really been able to prove this having had the odd day with no pike trouble over gbait and some days with just as much trouble with loose feed. Today I wanted to just try loose feeding, but knowing that a lot of bleak are in the area I decided to cup in a pot full of hemp and another of caster! I then spent 15 minutes setting up a 2grm rig with 0.1 to a 16 PR311 and then proceeded to run this through the swim with caster on the hook. Thirty minutes later and I hadn't had a bite, oops! Time to set up a pencil rig, the usual 1grm job with 0.09 to 16 PR311 and also a 3grm flat float and I also started loose feeding some bait. I then tried the flat float with double caster, but to be honest it was to big as there was not much flow, but I did get a bite on the drop so picked up the pencil rig instead. Finally I was getting the odd bite, from small dace mainly and the odd small roach, but the wind was now awkward and I needed the 2grm rig.

For the next hour I picked up the odd small fish on caster but no bites on the hemp, but bleak arrived so I cut the caster out and upped the hemp feed. I was missing lots of bites and put this down to the little dace, bringing back one of them I had my first pike attack. I pulled quite hard but after a couple of minutes I reckoned I had hooked the pike as it had not let go of the fish, I decided as it was not a match I would see if I could land the fish. I guess between 10 and 15 minutes later and after 2 failed attempts I finally netted the bugger, I estimate it to be 6lb. The hook was in the outside of the 'scissors' the safest place to hook one and land it on monofilament. All the while I had played this fish (upstream of my peg) I had continued to loose feed and had bites straight away. Here's a piccy of pikey, it don't look so big but it is curled up in my big carp landing net (glad I had it with me) as I did wanted to pick it up! 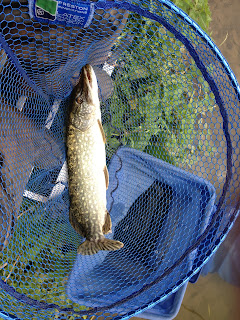 About 3 hours in I started to get bites on hemp, I was missing loads of bites on this on every rig I tried, even a light strung out 4x16 I had put together. The culprits were dace of course, as the roach tended to hang onto the hemp that little bit longer. For a laugh I tried a bit of black float rubber on the hook and I did catch 3 fish on it but most runs through did not result in a bite. I finished with around 9lb of fish in 4 hours, a bit disappointing as I had only had 3 net roach, but loads of bites after that blank first hour. I had a pike on again twice more, but can't say my experiment proved less pike trouble as I landed that fish on the first attack. I don't think I will be trying this potting approach in a match anytime soon, balling at least provides lots of fish straight away (most of the time) with the chance of some better fish.

Newbridge this Sunday on a Superleague match, there were some very good roach catches last week, with fish to over a pound caught. Whether they will feed again so well I don't know, the river has got clearer and the fish do tend to shoal up more. A good peg, a short walk, no pike, and sack full of roach... is it too much to ask, lol!
Posted by Tim Ford at 21:36