Laptop has been crashing for last few days and I have had to get into "IT" to sort it out, fingers crossed it now works!

I awoke Sunday morning feeling a tad tired after a couple of boozy days thanks to Darren Gillman getting married, but arriving at the draw this was nothing compared to Glenn Bailey who was making frequent sick visits to the toilet, lol! I was once again going for the normal draw (no more short walks for me) and the team draw put me on peg 28 at Swineford, a walk of only about 3 fields!! I did have a hand with the gear some of the way thanks to Martin Barrett, Paul Elms and Rich Lacey. Drawing Swineford has been a rarity for me so I was pleased to be here, especially has the peg can produce bream. The river was still carrying extra colour and pace and as a result I couldn't see me fishing anything else bar the feeder, and something to do with the fact I took the pole out of the holdall before the long walk!! So two feeder rods were quickly assembled, one with a 15 B711 and 0.16, and the other 11 B711 to 0.18 for lob worms. The two anglers either side of me Mike Withey and Jerry Pocock (who always beats me) were tooled up with 1 feeder rod each.

The river was actually more pacey than I realised and I needed 40grms with a big bow in the line to hold bottom across by the willow tree. I was using a gbait feeder and started with red maggots on the hook, and I had bites straight away from small roach and perch. I tried caster and the result was the same fish size, dendrabena and the same result, although a 10oz chub was a bonus, (see photo of me landing it courtesy of Mike Nicholls) so on with the lobby and... no bites! Back on the lighter gear and the bites stopped for a while and I hoped that bream had moved in, but 20 mins later the culprit appeared as a 1lb perch, small fish bites soon resumed but less often.

Half way through Jerry had snared his usual 3lb bream and lost another, but Mike had only a few perch and my bites had really slowed as a result of me filling it in with worm and caster! I did snare a few perch down the inside on the feeder (but again no quality) just to rest the far line, but once again my ineptitude at catching bream shone through and I avoided them but did catch two nice dace on double dendra.... To rub salt into the wounds Jerry had another skimmer and lost another and Mike had a 6lb+ fish in the last hour. When the scales arrived I thought I was going to be near bottom of the section with 5lb, but just for once I under estimated (!) and weighed 7lb 14oz which was probably the highest weight on the day without a bream or decent chub, not that was anything to be chuffed with! Jerry had 9lb 7oz and Mike 9lb 12oz to make me a chip shop sausage and I finished 3rd in the A div thanks to Paul Elms beating me by 2 ounces, shit I'm gonna take some stick! In hindsight if I had limited the amount of bait I fed I could probably have caught roach and perch most of the day, but that said I would always go for bream if they are usually in the peg and so I can forget hindsight! 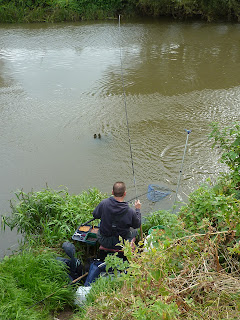 The match was won by Bristol Avon bream expert Kevin Boltz with 26lb from the Cornfield, and Andy Ottaway and Neil Mercer followed with low 20's from next to each other in the long ashtip flyers! I think Neil ought to buy a few more lottery tickets cos he draws out of his skin on river matches I fish (does that sound bitter and twisted, hee hee?) I should say that many anglers struggled on the day, and without a skimmer or bream you really were out of it.

In the A div Bathampton Elite pulverised the result winning with 25 points, my team (Thatchers A) came in joint 2nd tied with BTM services, but we are holding onto the overall lead by 1 point. Bathampton Invincible came last again, and even the organiser Mike Goodhind read them out as Bathampton Invisible, lol!

My one bit of personal salvation on the day was that I proceeded into the next round of the knockout by beating Martin Reyatt's 1lb 6oz, I didn't give him too much stick! However, waiting for me in the next round is Kev Boltz... oh dear!

ATWL starts next Sunday and were on the same stretch of river and I see more rain is in the forecast, does anyone have a handbook I can borrow of how to catch bream?
Posted by Tim Ford at 18:48