Another winter league and another flooded river and I didn't bother putting a float rod in again. However, the river was not as bad as I thought and some pegs did allow a float to be used, although as it transpired not many caught on it.

I was once again a little jaded at the draw thanks to rather too many pints of Guinness the day before, I spent most of Saturday out with Mark Tanner and Glenn Bailey watching Bristol Rovers win a game and actually playing well! Back to the fishing though and Mat Parsons was once again drawing for the A team and he came back with again a good looking team draw and put himself up at Rotork. I was off to peg 24 which is a cow drink peg and meant I would have to get the box in the water. This peg was solid in the summer (in the lead up to the National) with bream and hybrids, but of late it has not been anywhere near as good. On peg 26 (where Nick Chedozy caught 2 bream last week) was Jerry Pocock, can't believe how we keep drawing so near each other! Jerry was obviously cock-a-hoop at being next to me and made in known he has beaten me of late.

I had a nice steady flow of water in front of me, and so I set up two pole rigs for fishing about 10.5mtrs, a 3grm rig with an 18 to 0.1 and a 5 grm flat float with 16 to 0.12. I set up one feeder rod with the standard 14 to 0.14 and hoped the bream would put in appearance again. To start the match I threw in 6 balls of gbait on the pole and 6 down the middle for the feeder. I picked up the pole and tried the 3grm rig, and on about the third run down I had a small roach, but no more bites. The flat float also yielded 1 roach but again no more bites, in fact I never had another bite on the pole all match and should have known as both Chris Parr and Mike Withey in my section had been here last week and struggled. Thirty minutes in and I went on the feeder initially with 3 red maggots on the hook, I had a small roach first cast, then a perch then something a little better. I thought it was a hybrid but as the fish came in close it dived into the reeds, and so I pulled hard and up popped a 1lb chub. Over the next hour I took a lovely 12oz roach, a perch, a gudgeon, and 4 small chublets. The trouble with chublets is they tend to feed aggressively and then disappear, and this is what happened to me. A couple more small roach showed before the swim went dead and I never had a bite for two hours.

I had heard that my section was being won by Leon Hubbard who had landed a barbel, a very rare fish up at Newbridge, and a little walk confirmed this, plus Mark Lloyd had a bream and some skimmers, Jerry only had a couple of roach but two hours to go he landed a bream. I was then 'entertained' NOT,  by Dragon boats filled with 16 to 18 year old kids shouting, singing and drum beating, and nearly falling in. I didn't have it as bad as the anglers above me though, and that's probably why I had another 1lb+ chub out of the blue on a bit of lobworm. I missed another bite with 20 mins to go which nicked a dendra off the hook, and that was my lot. I should say that I did try fishing right across for a while on a maggot feeder in the hope of some more chub, but it didn't work.

I was pleased to weigh in 7lb 4 1/2oz which put me 3rd in the whole section and I would win the A Div section money by default thanks to Leon framing with 9lb 3oz (and he beat Kev Dicks in the knockout by 1oz!). I must admit I seem to be doing well at catching chub roach and perch on the feeder and I think when you catch these there not many bream in your peg, still nice to get a few bites especially as two people blanked in my section (bad luck Chris Parr and Rich Lacey).

The match was won by Andy Britt from Rotork, he had 3 bream for 14lb, Kev Boltz was 2nd with 11lb from next to where the match was won last week and so he beat me in the knockout. Team wise my lot Thatchers A won the A div on the day and have a 2 point lead overall from Bathampton Elite. Thatchers B are in last place and in danger of relegation! The river fished harder than last week, I suppose with less colour there weren't so many bream caught, but it is very frustrating not being able to fish the float. I pray for a week of no rain before next weeks winter league down at Keynsham. Oh I forgot to mention I think, I FINALLY BEAT JERRY POCOCK OFF THE NEXT PEG FISHING THE FEEDER, had to put it in bold just to make sure I don't forget it, lol!

Here's a picture of a very happy Leon Hubbard with his 6lb 8oz barbel which we all thought was heavier than that. 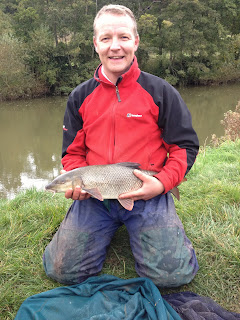