I didn't get much time to prepare my gear on Saturday as I was in bed till midday nursing a hangover after celebrating Glenn Bailey's forthcoming 50th birthday, I'm really too old for getting home at 3am! It was a great night out though and Glenn was sick, a lot, lol!

Waking up Sunday morning (now back to 100% fit) it was tipping down with rain and of course it had been for hours and it was cold. The temperature was 4C as I left home but down to 1C when I pulled into the rugby club and the heavy rain was now snow! This of course all added up to one thing, a bloody hard day on the river. The team draw put me on peg 18 which I was more than happy with as it is deep in close and bream can show here. As I pulled into the field I was met by a torrent of water running down the path, and I gingerly drove threw the "pond" at the bottom and parked behind my peg. It was now 8:40am and with a 10:30am start and the rain and snow falling heavy I sat in my car, turned the radio up and kept myself warm. At 9:30am the rain had nearly stopped and so I got out and got set up. Either side of me Nicola Goodhind on 20 and Brian Melksham on 16 were already thoroughly wet and cold!

I did set two feeder rods up but in the end I only used one for 90% of the match, this had a 50grm open ender with a grip lead to take it to over 60grms, 0.165 Exceed to a size 12 PR455 (I think that's the code, it's got a barb on it anyway!). The river was rising and was going to do so all match, so I set myself to fish from halfway up the bank but had to stand up. I started by dropping the feeder in about 3ft past the end of the rod, and although I had steady water here leaves were pulling the tip round every cast. I had no sign of a bite until 11:45am when I saw two definite knocks on the tip, an eel maybe? I resisted striking and then 30 seconds later the tip banged down and I was in. I pulled hard as knew there were a lot of snags in the peg and this felt like a good eel but then up popped a fish tail. Into the net went a lovely roach that was later weighed at 1lb 10oz (and I thought it might go a pound). This fish had fallen to a lobworm tail and 20 minutes later a much smaller but just as welcome roach snaffled the same bait. No more bites followed and with about 2 hours to go I could no longer sensibly fish the same spot as the rubbish coming down was getting worse, see the photo below of one example of what I caught, it was horrible, but I bet you laugh and say "what the f...!" I was however, happy as at this stage I was winning the section with only Lance Tucker having also caught a fish. 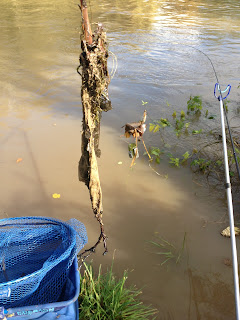 I had to fish in much closer now and the depth was still good here, I hoped the fish would push in this close but the only trouble was it was very snaggy. Over the next hour I pulled out at least 3 branches and pulled out of other snags, but it seemed I cleared the swim and had a relatively snag free last hour. I missed a good bite on the lobby, and when I reeled in the worm had doubled over the hook, I also seemed to have an eel rattler bite that didn't develop but the bait had a couple of marks in it, bugger that could be costly I thought. Brian Melksham came up see me for about the 3rd time, and he was still blanking, when I had another bite and a 4oz roach had swallowed the bit of lobworm. Then 5 minutes to go I had a little eel to end my day.

I had the scales and weighing didn't take long, Lance weighed 6oz, myself 2lb 6oz and the rest blanked. One of the harder sections methinks as 'only' 17 people blanked out of 60. The match was won on the day by Martin Reyatt with 9 good roach for 5lb 11oz, Mart was in the trees in the 130's and caught all his fish in the last half of the match on lob worms. Steve Priddle was 2nd with 4lb 11oz, and Gary (spawny) Cross foul hooked a 3lb 4oz bream to come 3rd, it was his only fish, lol!

On the team front Bathampton had 8 people catch from 10 and won comfortably on the day from Thyers, Thatchers also had 8 anglers catch but had much lower points and came 3rd. That now means that Bathampton hold a 3 point lead over both Thyers and Thatchers with just two matches left on the canal.

In terms of fishing a river the conditions don't come much worse than today, the river had risen at least 2ft during the match and driving home I saw it was in the fields at Jack Whites and about to flood the Lock Keeper pub car park. There was no shame in blanking today and I was really chuffed with that big roach and coming 6th overall. Spare a thought for my team mate Nathaniel Johnson who only caught a "nappy" and he blanked last week too, and my old mate Shane Caswell who blanked for the third match on the trot.