Friday was not a good day, the house I was going to move to fell through right at the eleventh hour as the owner had a stroke, bad news all round for everyone. Luckily though the wife and I could drown our sorrows on the evening as we attended Glenn Baileys surprise 50th birthday party. It was a really, really good night out and Glenn was in complete shock. The party brought back together some of the Silver Dace boys of the past. I had to add a photo that was taken, see who you recognise! 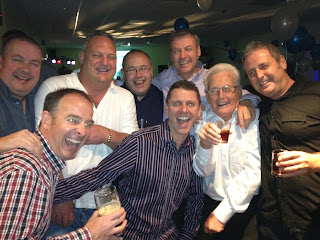 So onto Saturday and no real hangover so I was up and about early, a walk to the river at the crane showed it had lost lots of colour but was still very pacey, I felt only a very few pegs would be float fishable so I decided not to mix up a balling mix but take some dry on the day. I then did not sleep well Sat night thinking about the damn house, and was a bit grumpy when I finally got up. Getting to the draw at 7:30am the car park was already nearly full, but I managed to get a breakfast and consumed it sat next to Martin Barrett. Martin reckoned a draw in the long ash tip at the Crane would be a good shout, I thought a chub peg would also be good. I got into the draw queue (more a ruck) and started to get ribbed about how lucky I had been on this match in the past, really? Lol! Finally got to the draw bucket and pulled out peg 96 which was in the long ashtip, happy days!

I walked to my peg with Andy Curry, who generally fishes Frys matches, he has had problems with his hips for years so fair play to him for supporting the match. When I got to my peg I was a bit gobsmacked, there were branches about 10ft above me and some sticking out below, I just couldn't see how I could fish the peg properly. I rang up Paul Benson (one of the organisers) and had a moan which was a bit silly cos I moaned about moaners a week or so ago, I put it down to my grumpiness! Luckily for me Mike Weston below me lent me a shovel so I could dig down a bit further, and then Martin Barrett (on the first peg in the long ash tip) lent me a little saw and some tape and I did some gardening! With 30 mins to go before the start I had nothing set up, but had mixed up 3 kilos of gbait, so I set up a feeder with 0.14 exceed to a 16 B611, then a crowquill with 0.1 to 18 PR311 (I think, I can't remember those damn codes!) and cast it in to plumb around. I hit a snag and lost the hook, so put another on and cast a little further and this time I lost the bulk! I threw that up the bank, there was now 5 mins to go! I decided I needed to fish the pole and set up a 4grm float with the same terminal tackle as the crow, in front of me the river was it seemed clear of snags. As the bank was dodgy I couldn't get my box down and so would have to stand fishing the pole.

On the whistle, oh no sorry, 15 mins after the whistle (!) I threw in 8 balls of gbait, slightly upstream of me to ensure I was clear of snags. Picking up the pole I stuck on a maggot to see what was about, after a few runs through I hit the snag, I'd run down too far and had to put a new hook on. Then I had an 8oz roach, and for the next 30 mins I had odd bites from 4 to 6oz roach then disaster, I hit the snag and lost the whole rig. The snag was about 2ft off bottom and caused the float to bob up as the olivette hit it. Well I can tell you I was a bit pissed off by now with this snag as I was convinced the peg held a boat load of roach. I got another rig out and started again and was into roach again, this time slightly smaller but now virtually one a chuck, maggot was by far the best hookbait I found.  This continued until about half way through and then it slowed and I tried feeding 2 more balls of gbait, but as I searched around more snags appeared, and I spent a very unproductive 30 mins not catching. I knew Martin Barret and the anglers below me were catching roach  and I couldn't keep up with them so I decided I had to fish the gbait feeder in the hope of getting a few skimmers or bream which can show in this area.  No suprise when I was soon tying on another hook on the feeder, but then realised I should be chucking it right in front of me, doughnut!

With 90 mins to go I had a skimmer of just over a pound and thought maybe I was on for a few, but as it happened no more came. I threw in a couple more balls as things were quiet and I felt the match was drifting away from me, but then roach bites on the feeder cheered me up a bit, though they are buggers to hit! I did try the pole again but to no avail. Back on the tip and another bite and I thought a roach but no, this was a bream, a big bream, a bloody huge bream, ummm no it was a pike! Hang on I think pike count, so whilst playing the fish I rang Paul Benson (one of the organisers) to check and he said yes they count. For the next 15 minutes I held onto my arse and hoped the pike would hold onto the roach. As it turned out the hook had transferred from the roach into the pikes scissors (lucky or what!) and I thought I might do this. Islid down the bank as far as I could and at the first attempt netted the little beauty, I thought it was 8 to 10lb. I then realised I was stuck and shouted for help but nobody heard, so I bit off the hooklength, threw the rod up the bank and managed to get back up and put the pike in the keepenet, phew! Not long after this Gary Bowden and his wife Anita arrived and so did the roach, I landed a 1lb fish and few smaller ones and then a 12oz fish on the whistle, all on the feeder with double red maggot. I'd really enjoyed my day, especially catching on the pole as I have missed being able to do that this year, I love catching roach as you have to keep working at.

Word had it that the river had fished really hard, and I was looking to do really well with what I thought was around 18lb. The scales arrived and there were three 9lb weights in the bottom of the section, my pike weighed 10lb 5oz, and my other fish 13lb 4oz for a total 23lb 9oz. Getting back to the results at the rugby club and people were saying I'd won the match as no bream had showed and the best chub weight was 14lb from Swineford, and indeed it was true. I got plenty of stick for moaning about the peg (which I deserved) from organiser Ray Bazely, and I need to say now thank you to everyone who put themselves out to peg and organise and support this match which raised over £1100 for the poppy appeal.

I'm sorry I didn't get a full overall result, I know the 14lb was 2nd, and Martin Barrett was 3rd and the guy above him (Mat) was 4th, and 5th was also in our section, so there are plenty of roach in this field!

Quite honestly I am a bit emotional at winning this match for a 5th time, there have been times when I wondered if I'd ever to get to fish it again (some dark days a while back) and so to do it again is overwhelming really. Thank you to everyone for the kind words, and all I will say is this, getting diagnosed with cancer doesn't have to mean the end of the world, and I've learned in life to never give up on anything (even if I moan!). Getting home my wife and kids were over the moon, and that was just great. Lastly good luck as ever to Bill Milton, saddened he couldn't get to the match but he is one hell of a fighter and a true gent.
Posted by Tim Ford at 21:20