I spent most of the week wondering if I should go fishing on Sunday and if so where. I decided to go as I won't have many chances to fish for a while, but it was not until Saturday afternoon that I decided where to go as it was a toss up between a bit of chubbing on the river or go to Hill View. Hill View won as the recent match results had been good after a recent stocking of F1s.

Its a nice easy journey to Hill View (just past Tewkesbury) and with a 9:30 draw no early start is required. A match had been fished on the lakes and the back canal on Saturday and 70lb had won but 35lb was 2nd and the fish were hard to come by. For today's match the 4 canals were in and I hoped I would draw on one of the first 3, not because it had been fished the day before but because it always seems to fish harder when I go. So after one of Keith's breakfasts I got my peg, 88 on the back canal, bugger! It was also at the windward end which everyone said would be harder on all the canals (I'm getting all my excuses in early, lol).

The peg was a bit sparse of reeds for my liking, it had a funny pampas plant that had fronds going into the water that meant I couldn't find a decent spot next to it. Most pegs on the canals have thick reed beds and a little bay so you can explore deep and shallow, I was still confident of catching a few though. Picture of my far bank (before the start and before the very cold wind got up brrrr!) and you should be able to make out the other canals in the distance. 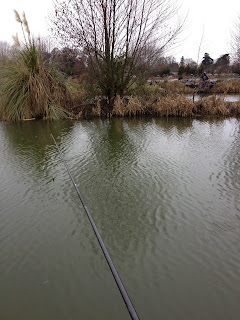 I could tell you all about the rigs I set up for the margin, the middle, just going up the shelf and dobbing rig but I never had a bite on any of those! I could tell you all about the first 4 hours but other than 1 liner I will struggle to make it enjoyable. What I can say is the lad to my left on the end of the canal had 1 F1, the lads going to the right had though caught a few, with the lad one off the end catching F1s well for the last 3 hours. I can tell you that I was very pleased to be wearing my thermal underwear, 2 t-shirts, 2 Preston micro fleeces, windstopper and new DF20 suit cos you get very cold when catching eff all

At about 2:30pm  (4 hours after we started) I hooked a fish and what was probably a F1 came off as I broke down to the topset! I had hooked this fish against the far bank reeds in about 3ft of water, where I had fed some maggots and micros right from the start. Sticking double red maggot on the 18 PR412  I tried again, and 10 minutes later the 0.2grm PB Inter1 went under and I finally broke the blank with a 1lb+ F1 (the bloke who was catching gave me a little cheer!).  It was probably another 10 or 15 mins later when I landed another F1 of the same size. Alas that was the end of the F1 shoal! With 30 mins to go I had my last bite and this time it was a carp, on 0.10 you have to be careful, and this fish was going some. It turned out to be a near 4lb ghost common and was a very pretty fish. My three fish weighed 6lb 2oz, which beat wo people on my canal (DNWs) and then the two anglers on my right had 34lb (mainly carp) and 52lb (F1s) and whilst they were venue regulars it was obvious where the fish were. 63lb won the match from canal 1, and there was a 54lb from canal 3 and a number of 30 and 40's.

That was probably one of the hardest days I ever had at Hill View, normally you get liners and indications, but as I said for 4 hours I only had one. The lad to my left had 2 bites all day, but as I've said before that's winter fishing! There was a Frys match on the Avon, Dean Harvey won it again, with 3 bream and a carp for 20lb, 5lb was 2nd and 11oz third, the rest blanked.

Well I'm not fishing next weekend as once again I have some family commitments, these have also kept me away from fishing Gold Valley in the ATWL semi final. Good luck to the Thatchers lads on there, and good luck to the Bathampton lads on the Grand Union Canal where currently a 1lb is a good weight. I've got into the Acorn series run by Paul Faires (think I was 3rd reserve) and that will be my next match on the 8th March. Then I will not be fishing for 2 weeks as 1) I shall be moving house (fingers crossed) and 2) My German bosses have 'invited' me to a Monday meeting in Munich meaning I have to travel on the Sunday. By then it will be April and I hope an effin lot warmer!
Posted by Tim Ford at 19:56