First of all an apology for last week, I should have spelt Martyn Reyatt, Reyat, and he also told me I forgot he blanked on the Poppy raffle (and he bought £10 worth of tickets!).

I've not be feeling very well this last week, and I was in two minds whether to fish this match or not, but as I was in the top 3 individuals and in the last 4 of the knockout I got my head round it. A few rigs were made up on the Saturday and with bread liquidized I was ready. I picked up Warren Bates on the way to the match as he was running the bank today for Bathampton, we had some grub, paid my pools, got my bloodworm and joker and did the draw. Due the pegging being spaced out there were some decent pegs in today, but I avoided them being a few pegs past the white gate up by the school (past the George). This is on a bend and I wasn't sure how it would fish, to my left Martyn Reyat said it was crap, and with Andy Pritchard on the end peg on the gate and Dave Wride on the next peg I thought it was going to be tough to do well.

I fed some licky at 5m, fed joker at 2m, 11m and 13m, the latter with some casters, I did feed some gbait but never had a bite over this. Dropping in on the punch I had 3 fish in as many drops and then a boat went right over the top, before the water could settle another boat went through, and just as I was thinking about feeding a bit more licky a 3rd boat came through! Unfortunately each of these boats came through with the rudder on an angle to navigate the bend and that messed the peg up worse. I finally managed to get things settled and whilst it was slow I took 15 roach on bread after 75 mins which seemed OK. I moved over to my 11m line but this was dead, perhaps it was too early. Dave Wride was doing OK across so I went over early on the caster and had 5 small roach in as many chucks, it slowed as expected but before I could work it out more boats came but this time they firked up the far bank! As you can see it was two boats strapped together towing another boat.....hmmmm. 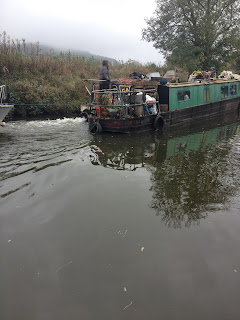 The middle of the match was pretty dead for me but I did have a little boat to my left where I fed a bit of joker next to (out of desperation) despite the owner and his dog getting on and off it all day long. At one point he went for an hour, but when he returned he had a fence post with him, he dropped that against his boat and it went into the canal. He son retrieved it and had a go chopping it with an axe. Despite all that I did get a whole 3 bites against this boat, one of them was a 10 to 12oz perch which I lost not far from the net, rollox. I went and fed some chopped worm down to my right on the inside (as at least this was not being messed up by boat wash) but only got to try this line once as a bit later a boat came and moored in there meaning I could not fish where I had fed, mint!

I went back across on the caster rig (as Dave was bagging) but it wouldn't go under so I tried my light bloodworm rig and I then had a run of a dozen dumpy roach before the "John Rennie" boat came up and trashed my peg again. More searching for not a lot of fish before I went across again and found the dumpy roach again, but I trashed the rig. Another rig attached and a few more roach before the John Rennie came back and finished the peg off for good. I was feeling pretty hacked off, but I did have a chuckle when Andy Pritchard had to get in the canal to retrieve two butt sections (look closely he is there, preparing to dive!). 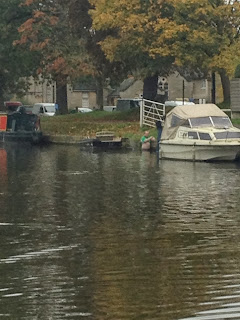 Not long after this Dave Wride snapped his pole but at least he had caught plenty of fish. I was quite happy when the whistle went, but not looking forward to weighing in. Warren got on with the task and soon I was staring at the section sheet with 4lb 1oz and a lowly 2 points. Dave won the section with 5lb 8oz, Martyn was 2nd with 4lb 12oz, and Andy 3rd with 4lb 4oz. As expected the perch I lost cost me a better result. I also got knocked out of the knockout by Nick Chedzoy, good luck to him in the final.

Getting back to the results I was really hoping my poor result was not gonna cost the team, and I was pulled out of the mire as the lads did well and we won the day with 42 points. Bathampton came 2nd with 40 points and Thyers 3rd. Thatchers now lead the league by 1 point going into the last match.

Joint winners on the day were Andy Britt and Shaun Townsend (him again) with 10lb 9oz, but Shaun left a fish in his net and managed to throw one back instead of in his keepnet, lol! Andy had a lot of skimmers in his net. In 3rd place was Nathaniel Johnson with 10lb from the recycle tree peg, and Liam Braddell was 4th with 9lb 13oz. Those good weights hide the fact that some sections were strangely poor, with 3lb a good weight in places.

Next week it is back on the river with the commercial house, looks like it is going to be cold this week.
Posted by Tim Ford at 20:17