As ever I was looking forward to this (my lucky) match, although the rain we had in the run up to the match was going to have an affect on the river. I'd taken a look at the river on Saturday and on Sunday it didn't look that much different to me, so I guess the rain just kept it up. I got to the draw nice and early but still was parked a fair way from club, I returned the Poppy cup to organiser Ray Bazely and got myself a breakfast. There were so many faces I recognised at the draw I could have spent all day chatting, and it was nice to finally meet fellow blogger Ivan Currie (Ivan's Angle) at last.

As far as I was concerned today a draw at Newbridge or one of a handful of pegs up the crane would be needed to do well. Unfortunately my drawing arm let me down today (I think I've used it too much in the past) and I ended up the last peg in the little ash tip field which was one away from peg 85 in the long ash tip where I have won from before, but the pegs are like chalk and cheese. Actually the guy on 85 was a basic club angler, he had dug his peg out so he could sit on the bank, but not on his box on his arse. His jeans were halfway down his arse and he had a crack full of earth, either that or he had shit himself, lol! (Poor bugger had no heavy feeders and couldn't hold bottom apart from close in.) Below me today was Swindon Stalwart Pete Gilbert, and two below him was one of the nicest blokes in fishing Mike Shellard, in the bay was Derek Coles and I fancied that peg for the section. My set up today was simple as the peg was boily and pacey, two feeder rods; one with a 13 B711 (for maggots, casters, worms) and one with a 12 PR355 (for lobworm) both attached to .0165 Exceed line and a dirty great big open ended feeder! My groundbait was sensas red magic and brown crumb mixed on the wet side.

On the whistle I under armed my feeder to about 3 rods out and had about 6 quick casts and then impaled 3 red maggots to see what was about. There were plenty of leaves about and a few snags, and I lost a few hooks and pulled a branch out. It took me until 1hour and 10 mins to get my first bite from a small roach, and next chuck I had a 4oz roach. That was a false dawn and it was another 20 mins before my next bite which I missed. By this stage Glenn Bailey had a small pike below Newton St Loe bridge, Jerry Pocock had 6lb from peg 134 in the trees and Warren Bates had a small bream and a roach from peg 109 in the trees. Unfortunately Warren had to leave as his son had been taken to hospital, his son seems to be OK though and Warren left his net in and won the section despite missing 3.5 hrs of the match. My peg was producing the odd bite but nothing regular and I could tell it was just roach bites, apart from a perch that took a dendra and 2 maggots! Once again I was in familar rod pose as you can see, though this picture doesn't show up the boily water! 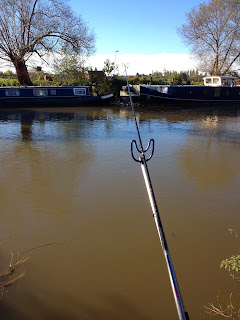 Word on the bank was that the Crane was fishing very hard and I kept my head down fishing in the hope a bream or two might show. I could not get a bite on a lobworm today, and never did all match, and I soon realised that bunches of maggots, casters, or worm and maggots was best. I never put less than 3 on the hook as I was trying to make a target bait for the bigger fish I would need, well this wasn't a team match! Mid match I took another couple of roach, including a couple of 4oz fish but I missed a couple of good roach raps. Treble caster then gave me a nice 8oz roach out of the blue and then a dace but this seemed to be the end of action for a while, my section was fishing dismal and so I kept plugging away but the last hour was not good and I had my fun feeding a couple of swans. 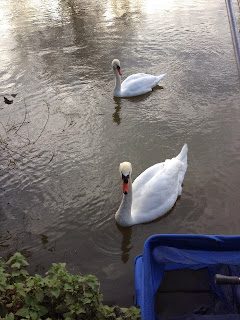 Another roach came my way with 15 mins left and then I missed a bite next chuck, I thought it was leaves on the line and it was only when I wound in and found no casters left  I found out doh! The match ended and I knew the cup would not be coming back to the Ford residence this year. The scales came down from the top of the long ashtip and only 2lb 3oz was top, my 8 fish weighed 2lb 7oz which was 1lb more than Pete and so I won the section. It turned out the Crane fished shite and my weight was 3rd in the 35 pegs down here. Up at Newbridge the fishing was much better in certain areas (despite Martyn Reyatt blanking) with some good roach feeding, Nigel Wyatt had a 2lb fish!

1st on the day was Jerry Pocock with 11lb 8oz a bream and some roach over a 1lb on the feeder (peg 134). In the last 3 weeks Jerry has been 1st, 2nd and now 1st on the feeder, which is amazing. I offered him a neck brace as I guessed he must have a stiff neck from staring at his tip, lol! Well done Jer, you certainly have the feeder sorted. 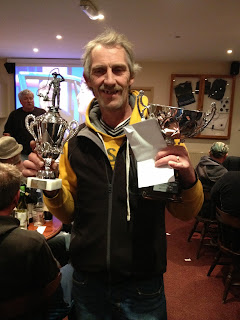 2nd was Jerry Welsh with a high 9lb from peg 10 in the little field (3 big skimmers and roach, 3 pegs from Mr Reyatt).

3rd Mark Harper 9lb 9oz from peg 26 with roach and a virtually a last cast 3lb bream all on the feeder. Another angler on a great run this autumn.

There were so many laughs today I couldn't begin to tell you them all, Ray Bazely is just the best person at announcing results bar none! Nigel Bateman who fishes for Keynsham Angling told me his plan was to have a good breakfast and win a raffle prize, and he did just that!I managed to fluke a raffle prize too. Dean Harvey tried to collect his brothers section winnings instead of his, and so many more laughs, just ask Phil Harding who stayed till the end, you don't get that on a commercial ;-). Finally well done to Ray and his team (Dave Haines, Paul Haines, Colin Ellaway) for doing a great job on this match, I believe £1200 was raised, and I look forward to the special one next year.

Next week sees the first ATWL on the canal, so all new rigs, new elastics and a set of blinkers and ear muffs required!

As a reminder my own fund raising is going well for bowel cancer UK, but I know there are a lot more generous anglers out there who are just itching to give me their money, so don't forget to click on my link, sign the form at Avon Angling, or see me, thanks to all who have splashed the cash so far, I'm over £500 now.
www.justgiving.com/Tim-Ford5
Posted by Tim Ford at 20:55