Let me start by mentioning Friday, due to being so busy all week I needed to take Friday as a holiday in order to get ready for this match. I tied up about 12 rigs with hook lengths and another 12 hook lengths, sorted some top set elastic, checked catapults, mixed groundbait and got all my bait, well most of it. The wife said to me I hope all that effort is worth it, well we all think the same don't we, but you've go to be prepared.

Saturday morning up at 6am and loaded the car for the journey to Malborough football club to meet up with the team. I then collected some lob worms from Lee Trevitt, bloodworm, joker, squatts and pinkies from Colin Dance. Nigel Evans arrived but looked a bit perplexed, he'd been out of work for a while and was skint and his lift to the match didn't happen, filling his car with fuel was a very big deal for him and I felt gutted for him and hoped he had a good day. The organiser had done the team draws so that every team would get 2 end pegs to try to make it as fair a draw as possible, so I had a 1 in 5 chance of getting one of these flyers. Alas I didn't get one, but was pleased that Nigel got one and a good one at that, Colin had the other but it was not always a good end of the canal. Sadly a local lad that gave us advice on our pegs told us we had a very poor team draw, with lots of barren pegs. I was off to Bayside and I did not know much about it, but Lee had fished there the week before and passed on some info. Basically I had 2 end pegs to contend with (one has framed twice) and big bush next to a bay, I was fishing for 6 points at best.

I followed Liam Braddell and got parked up and Steve Hemmingray (runner up in world champs) pulled up next to me. We walked down the canal together and he showed me the flyers and also said we were fishing for 6 points. Finally I got to peg J3 after pushing Andy Ottoway's Preston Trolley along a muddy towpath. Let me show you the view of the bay bush flyer from my peg (zoomed in) 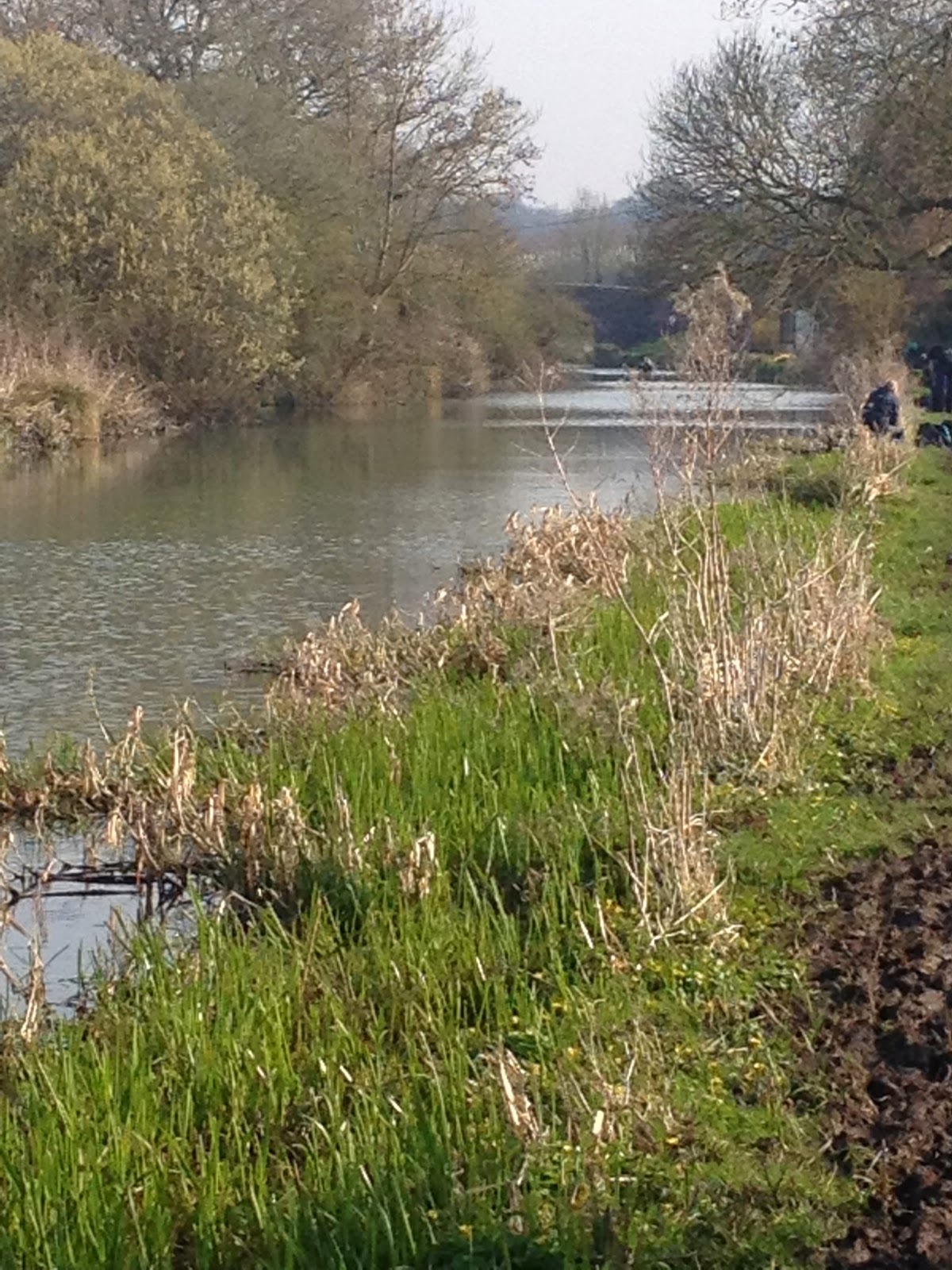 Looking to my left the pegs looked equally good 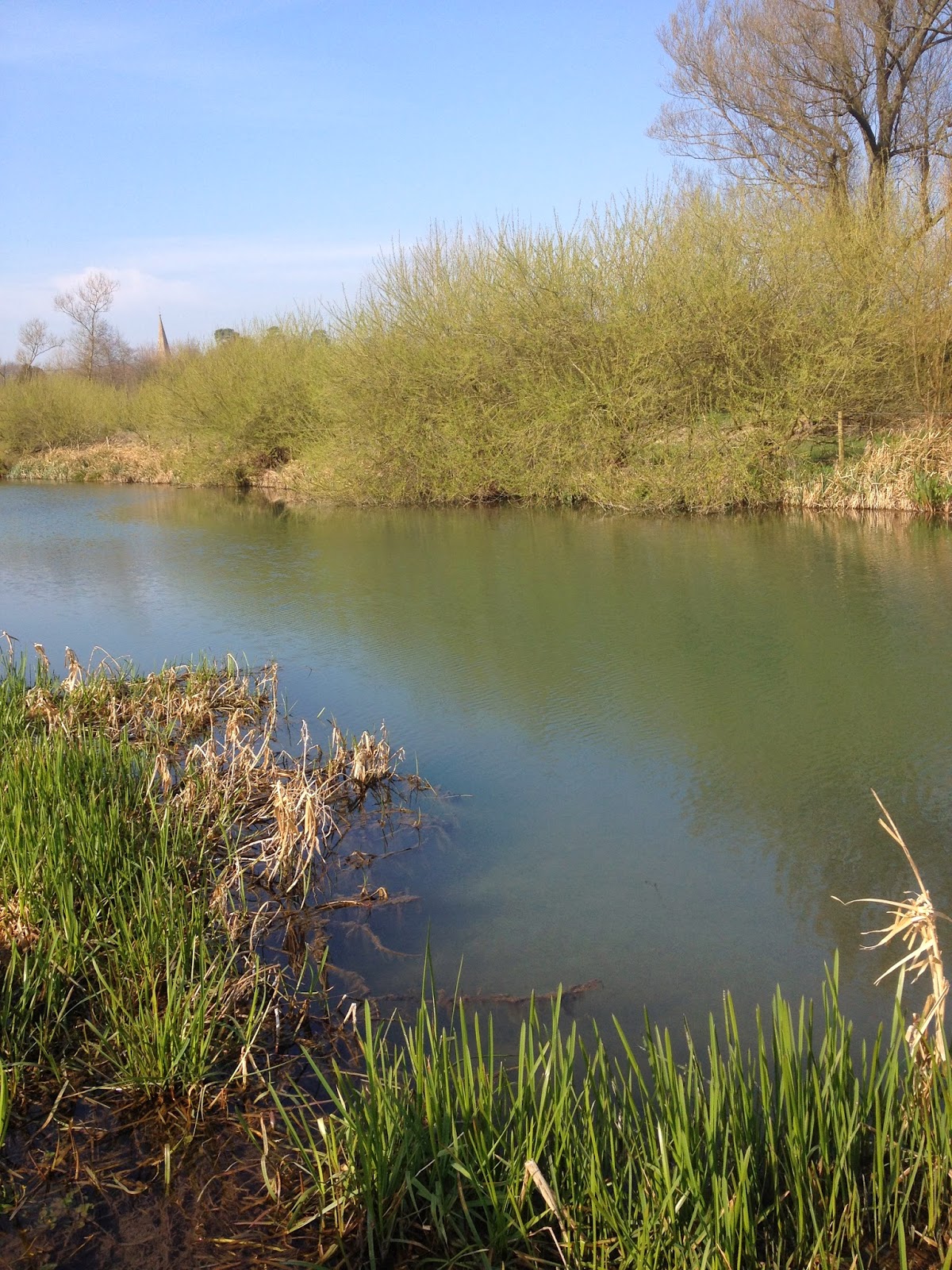 And now the view of my feature filled peg....not lol! 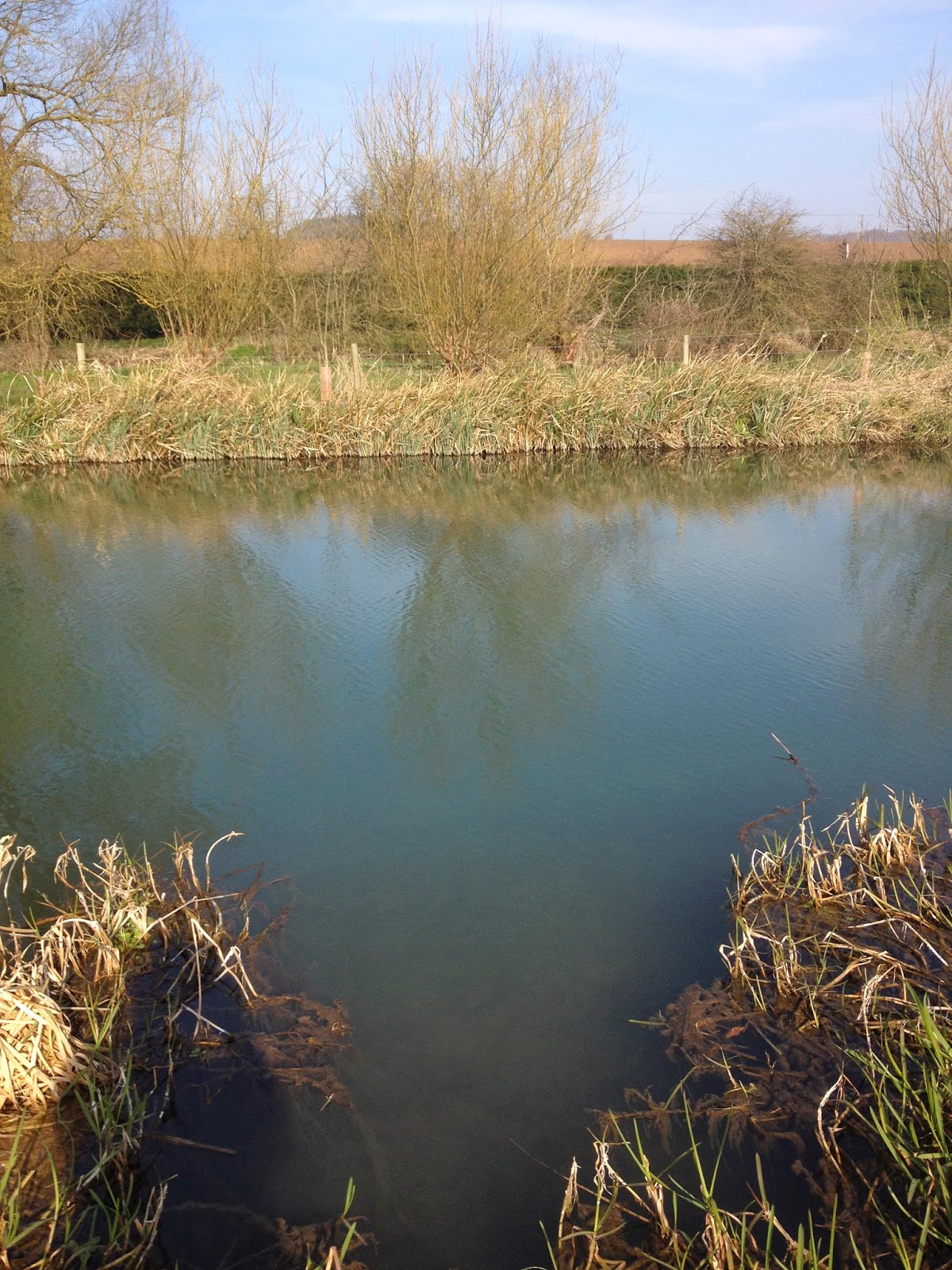 Have I got enough excuses in yet lol. I got my self settled into the peg and sat the box in the water as the nearside weed extended out a fair way, I noticed straight away how clear the water was and with the bright sun shine I thought this was gonna be a hard day.

I set up rigs as follows :-

To start the match I fed a ball of gbait with some joker and squatt on my 5m line, 3 balls at 10m, chopped worm off to the left at 13m, casters off to the right at 13m. Starting on the 5m line with pinkie not a bite, tried bloodworm not a bite. Over to 10m line not a bite here either until 30 mins in and 10z roach saved the blank, everyone appeared to be struggling at this stage. I went on to my chopped worm line with a lob tail, and no bites, so I tried my caster line and with a red maggot on the hook the float went under and I had a 2oz perch. Next chuck and another bite and a lot more elastic came out, a better perch!!! Well a bit better but it was a 4oz perch foul hooked in the dorsal fin!

The small fish were not playing ball and the only fish I could see being caught were odd tiny fish from right across, probably on bloodworm. I had not fed across due to it being so clear. I did all of a sudden get 4 small roach from my 10m line but they went again. 90 mins and I had another look on the worm and result a 8 to 10oz perch, sadly the only bite on a worm all day. I was not getting any bites over the gbait and so I decided to feed some neat joker a bit further across the canal at 11.5m and hope that would pull some fish in later. The maggot / caster rig did get me another perch of 6oz on the caster line and a 2oz skimmer before a boat came through the peg about halfway through the match and killed all my lines! I can tell you I was pretty concerned that I was letting the team down, and guessed I was on for a very low point score. The wind was really making fishing difficult, it was mainly blowing from behind me but would veer of left and right making feeding and presentation very hard. I was also being bugged by bugs, little midges kept flying into my face all match they were a bloody pain.

I had been relentlessly feeding squatts over the 10m to 11.5m line and finally with 2 hours to go the roach responded and using the 4x10 rig and fishing off bottom I started to catch, and during parts I was flying. Squatt on the hook was by far the best bait. I guess the boat colouring up the water finally got the roach feeding, and they were coming up off the bottom and I was feeding about 25 squatts every time. I had to feed then fish as it made hitting the bites better. With 25 mins to go the boat came back and I had to wait till the last 10 mins to catch the roach again and the match was over. Bank walkers advised the three flyers had all caught well but that others had struggled. The bush peg won the section with 4 very big perch and some bits for 11lb, end peg 1 had a big 8lb and the Dorking lad on end peg 9 had a low 8lb. I weighed 4lb 5 1/2oz which the beat the guys either side of me and of the remaining pegs I was only beaten by Steve Hemmingray who had 5lb 5oz which included a 2lb perch. That meant Steve got the 6 points and I got 5. Actually after the weigh in I was really happy with how I did, not giving up and working out the roach wanted to be in shallower / up in the water, keeping working was the key, and getting beat by Steve I guess I pretty much expected.

Getting back to the results and I started to see too many glum faces on my team mates, indeed some of them had really had a bad day. However, our two lads on the end pegs did their job and won their sections, with Nige Evans coming 2nd with 17lb, so I was well pleased for him getting a bit of dosh! The individual winner was one time Bathampton angler now Diawa Gordon League Dave Micklewright. Dave had 22lb of perch to 3lb, he told me after 15mins with no small fish and seeing an angler next to him catch a perch he tried his down the middle chopped worm line, 6 big perch in as many casts was a good start! Well done Dave, a nice bloke and now he has two semi wins on the canal to his name.

The winning team on the day was Kamasan Starlets, 2nd Diawa Dorking, and in 3rd and last qualifying place was Diawa G L. Well done all 3 teams, the cream rose to the top! Thatchers ended 6th which was very disappointing, think we got the feeding wrong as the fish did not respond to gbait at all, and also we had planned to catch the roach in the deep water but they were in the shallower water. We have to lick our wounds and move on.

Big well done to Nigel Franks who ran all the opens the semi itself, a very well organised set of matches.
Posted by Tim Ford at 20:36