Firstly your probably wondering why am I writing another blog post when I am supposed to be in hospital? Well the good old NHS royally fooked up on Wednesday, I was in the hospital name band on, surgical socks on and then they realised they had booked me in for a 90 min op when I need a 3 to 4 hour op. They didn't have enough time and so I was sent home, after a bit of swearing and my wife shedding some tears. It takes some mental effort for all concerned to get ready for a big op, and it messed my head up as well as my families. I was not sure whether to go fishing or not, and I ended up only on Saturday buying a little bait and deciding on another trip to Ivy House. I made some more rigs up and felt well prepared.

It only takes me 40 minutes to get to this venue which is quicker than many commercials, and so after a party last night (a bonus of not having the op) I was glad of a not to early start. Arriving at the draw 26 people were fishing today, and I saw a couple of familiar faces again, Vince Shipp, and Martin McMahon (who'd fished Sat as well and won his section by default from peg 46) and Nick (I forget his surname sorry!) and his brother. Saturday's match had been won from peg 44 (peg I had last week, doh!) with 43 2nd and peg 12 coming 3rd. When I drew out peg 45 I had to be happy that I was near some fish this time,  Nick drew after me and pulled 46. My views of the lake from peg 45... 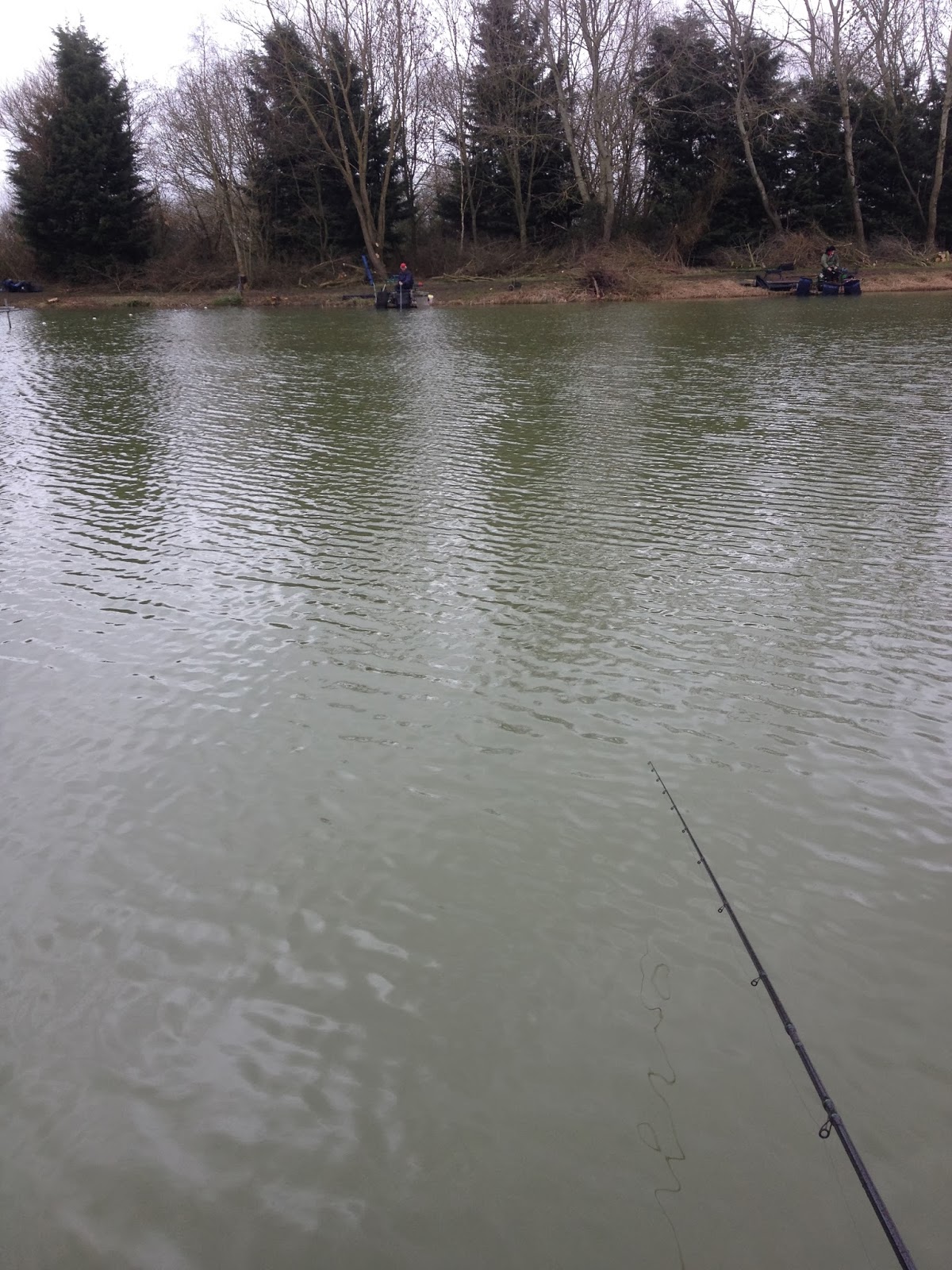 The lad on 44 had an empty peg to his left so he would be in for a good day! 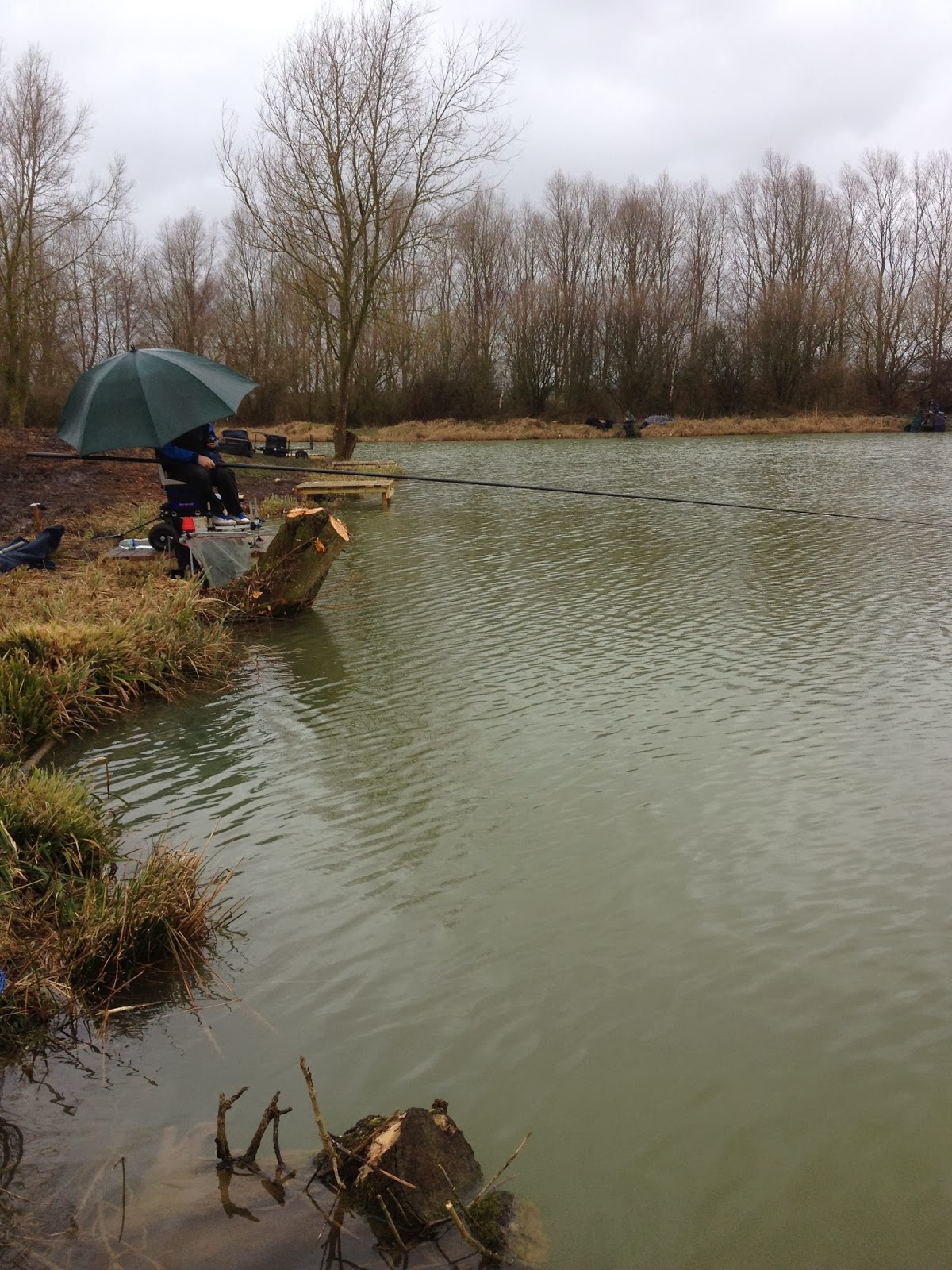 Nick doing a good gnome impression for the first 3 hours! 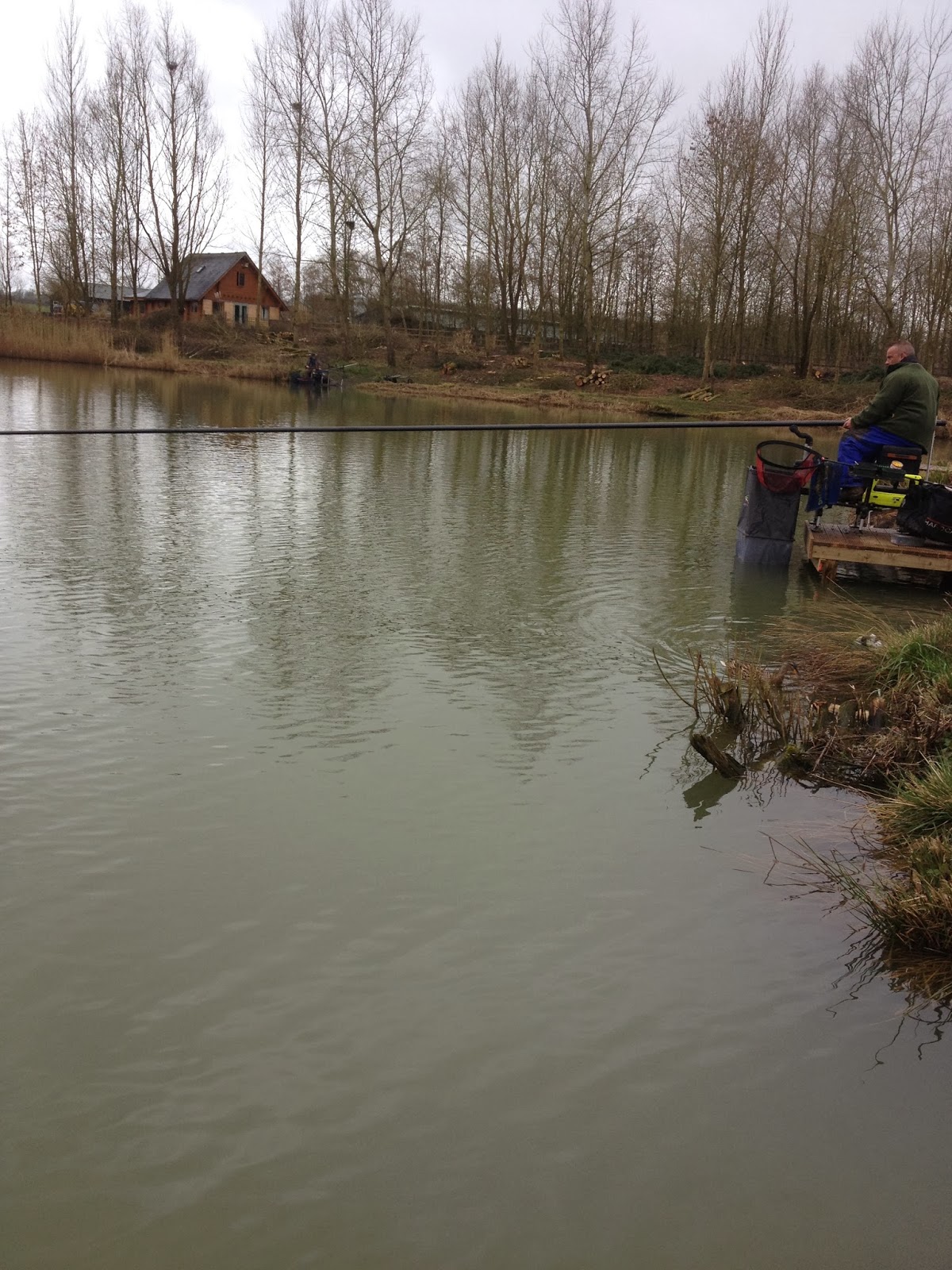 With the weather forecast to deteriorate during the day I was happy to have the wind blowing off my back and across and not as bad as some pegs. As Martin had caught on a wag the day before I thought I would set one up as a back up line, hmmm where's me waggler rod? At home in the shed where I left it on Tuesday! Thankfully Martin lent me a rod, and two hair rig hook lengths and some 4mm pellets, and I thought I was prepared, lol! That set up I set up two pole rigs the same as last week since the depth and conditions were similar. On the whistle I fed micros and maggots at 11.5m at both 11 and 1 o'clock, some casters at 6m (waste of space) and fired pellets at regular intervals all over the shop thanks to the changing wind! Dropping in at the left hand swim I only had to wait 5 minutes for a bite and my first 1lb carp, and with 2 more in the next 2 casts it was a good start and more than I had caught last week. This swim slowed and so I swapped lines and then caught another on double maggot. After the first hour I had 7 small carp which was OK as Nick was blanking and the lad on 44 had a couple less fish, but he then had a good 2nd hour. I had 5 carp and a skimmer in the second hour mainly from the right swim but it was getting harder to get a bite, and I wasn't getting any indications just bites out of the blue. Opposite on peg 13 Joe Thompson was catching regularly on the pole.

I decided to try the waggler and give the pole lines some time to rest, even if only for 20 mins, but it turned out longer.... Using a Sonubait bandum on the hair I cast out past my loose feed looking for any signs, and twitched the waggler back towards me, on about the 3rd time the float never came back up. I struck into a carp that powered off, and once I stopped it and started to play it I could tell it was fouled somewhere near the rear end! After 15 mins of tug of war a 7lb fish hooked in the tail was landed, maybe my luck was changing. A couple more casts produced no more bites and I was thinking I'd soon go back on the pole when bang, a gust of wind picked up the pole and slammed it into my other pole roller and snapped the no 7 section. I only just retrieved the other sections from the lake behind me before they disappeared. I tried to telescope the broken section, but the taper is very slight and it would not work, that meant I was now only able to fish 6m, "sugar" I think I said. Back on the wag and a couple of missed bites and then a 4lb carp hooked properly perked me up a bit, but it was a false dawn. After this the wag died and my 6m line never produced a bite, I tried the straight lead as the wind was now hampering wag presentation, but it never moved. I sat for the last 2 hours watching peg 13 bag up and Nick start catching on his long pole line as it seemed the fish in my swim went to his to look for grub! When Nick landed a 13lber I was worried he'd catch me up, and I was just feeling really frustrated and fed up with my lot. Nick nearly got me looking for the Valium when he landed a 4lb carp on the whistle.

As we packed up the rain came down and just got heavier and a few lads had already packed up and gone. The scales came round, and the lad on 44 had 20lb he'd not caught the last half the match but that was because he fed far too much bait and I told him so cos he is just starting up in the game. My fish went 28lb+ and luckily was just 2lb more than Nick and so I won the section which was a bit of a boost.

Back in the hut more hot tea and delicious cakes were laid on and the pools were paid out.

1st on the day was Joe Thompson on peg 13 (apparently he's drawn this peg 3 times and won each time now) with 56lb 12oz. All on long pole.

The silvers was won with 4lb 8oz (just two skimmers, for some reason they are just not feeding at present).

Andy Lloyd had stocked more carp into the lakes and canals, and with his enthusiasm and continued angler support I'm sure the venue and weights will continue to improve.

Well I guess I will be fishing next Sunday, not sure where, but with no pole and the river season ending I'd like to think I can get on the river.
Posted by Tim Ford at 19:43