I decided I didn't need a day of stress at work before my operation and so I took a days holiday. The plan for the day was to get out on the river as this would be my only chance before the season ends. From my experience long periods of flood conditions tend to lead to the river fishing its nuts off, the river would still be fast but I expected to get some bites. I thought of going up to Newbridge but with no trolley and not sure of the gate would be open I instead opted for the crane on the cattle grid. Chances of odd bream here but what I was really expecting was roach, and maybe the odd skimmer and hybrid. It was my first walk up here since the storms and I noted the platform near the bottom of the lane had washed away, a tree was blown down across the footpath, and the boat moored just below the cattle grid next to the decking had sunk, I laughed at the one as the owner of that boat is a complete twat, lol!

I only set up one feeder rod and that had a very big 30grm open ender on it with 0.14 exceed to a 14 B611. Groundbait was simply Sensas Magic and brown crumb, with generous amounts of casters and a few chopped worms going in. An under am cast was all that was needed to get the feeder about a quarter of the way across the river, and I had to feed a bow into the line to make sure it stayed put. I had 6 quick chucks and then stuck 2 big red maggots on the hook, within a couple of minutes I had a little drop back and lifted into a fish, a dace about 3oz. I had another one next cast and then missed a bite, and then had a 6oz dace. I tried casters on the hook but two chucks and no bites saw me back on the red maggot but this time three of them. Another drop back and this time I felt a bigger fish on the end, bream on. Oh hang on this is going a bit, I think it could be one of them huge chub I've always wanted to catch! A few minutes later I knew this was no chub as it was really pulling and holding heavy at the bottom, it was a pike I was sure. Sadly I won't know as a few minutes later one severe head shake straightened the hook.

The pike unsettled the peg for a good 20 minutes, but my next fish was a nice 8oz roach again on 3 red maggots. It was strange but during the day I only got bites on maggots, nothing on caster or worm, not sure I can recall that happening when getting bites from roach. The next couple of hours produced odd bites from quality roach and another big dace, and during this time an old boy fished the peg above me. He fished a maggot then gbait feeder for just a couple of small roach, but he also put out a deadbait for pike. He had a jack of about 4lb and another that was probably nearer 18lb, I joked that it was the fish I lost earlier! Not long after this I was attached to another lump and as I was now on a 13 B711 I was sure the hook wouldn't go, but the line might! Eventually after what seemed ages I landed (well the old boy netted it) a big old pike, dunno how big, perhaps 12lb. Here's the best pic the old boy could take with my phone, lol! 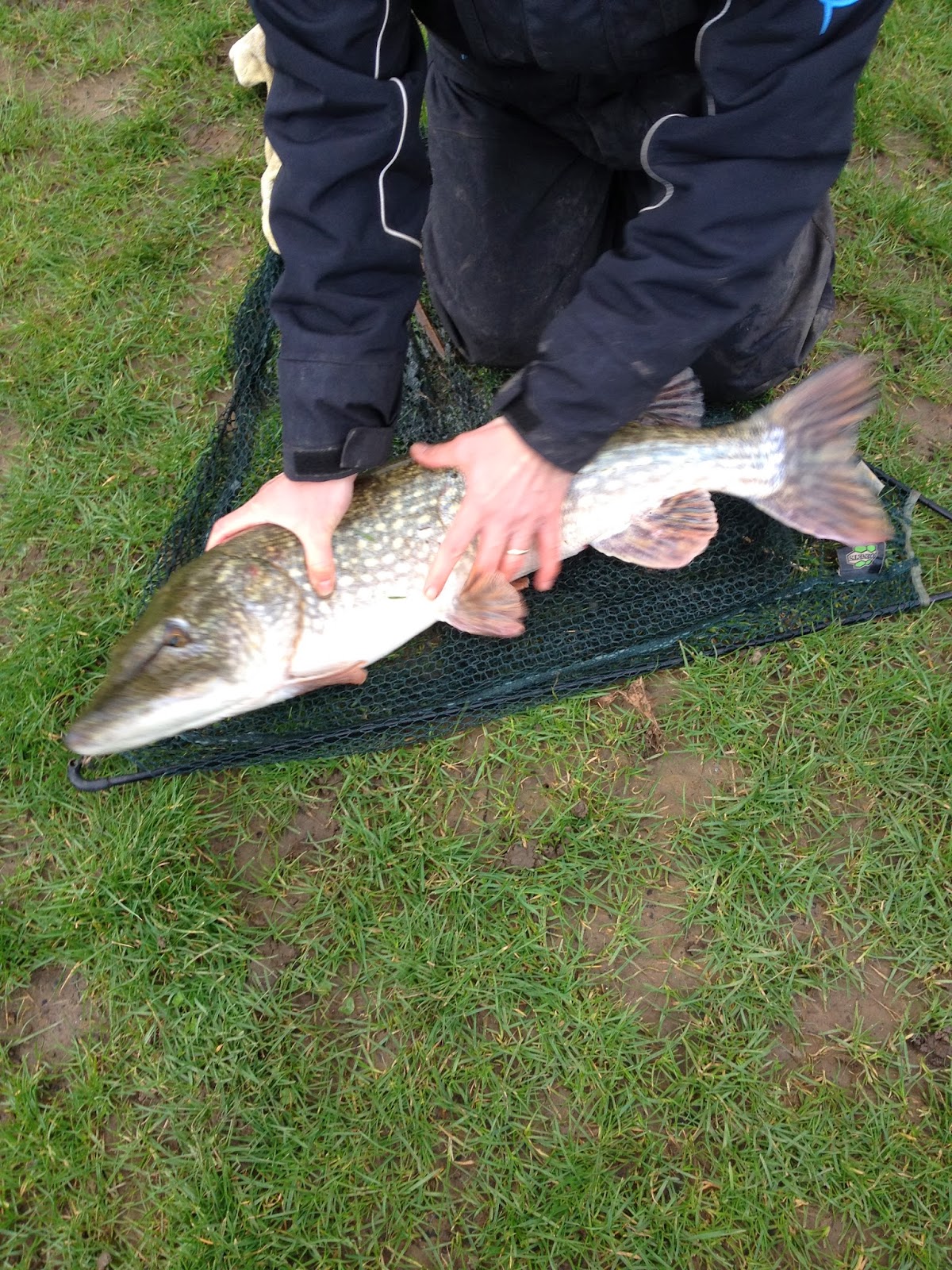 Mr Pikey put paid to any sport after that, a couple of roach taken further down the peg were it, and I proved that going lighter made no difference as an 18 to 0.12 never got a bite and so I packed up. I decided to take my own photo of my fish in my landing net, hopefully it gives you a feel of the size of the roach, I guessed I had 6lb to 7lb. Some of the fish I caught today, dace and roach had really fat bellies, and all of them were solid, so I guess they have been eating well during the floods. That was a nice day, I didn't mind not seeing any bream action as catching decent roach on a feeder is challenging and interesting fishing, and I'd had enough bites to keep me interested. I just wish I could have another crack at the river with a float I reckon it would be brilliant if the river would slow up enough. I hope some of you get out there on it! 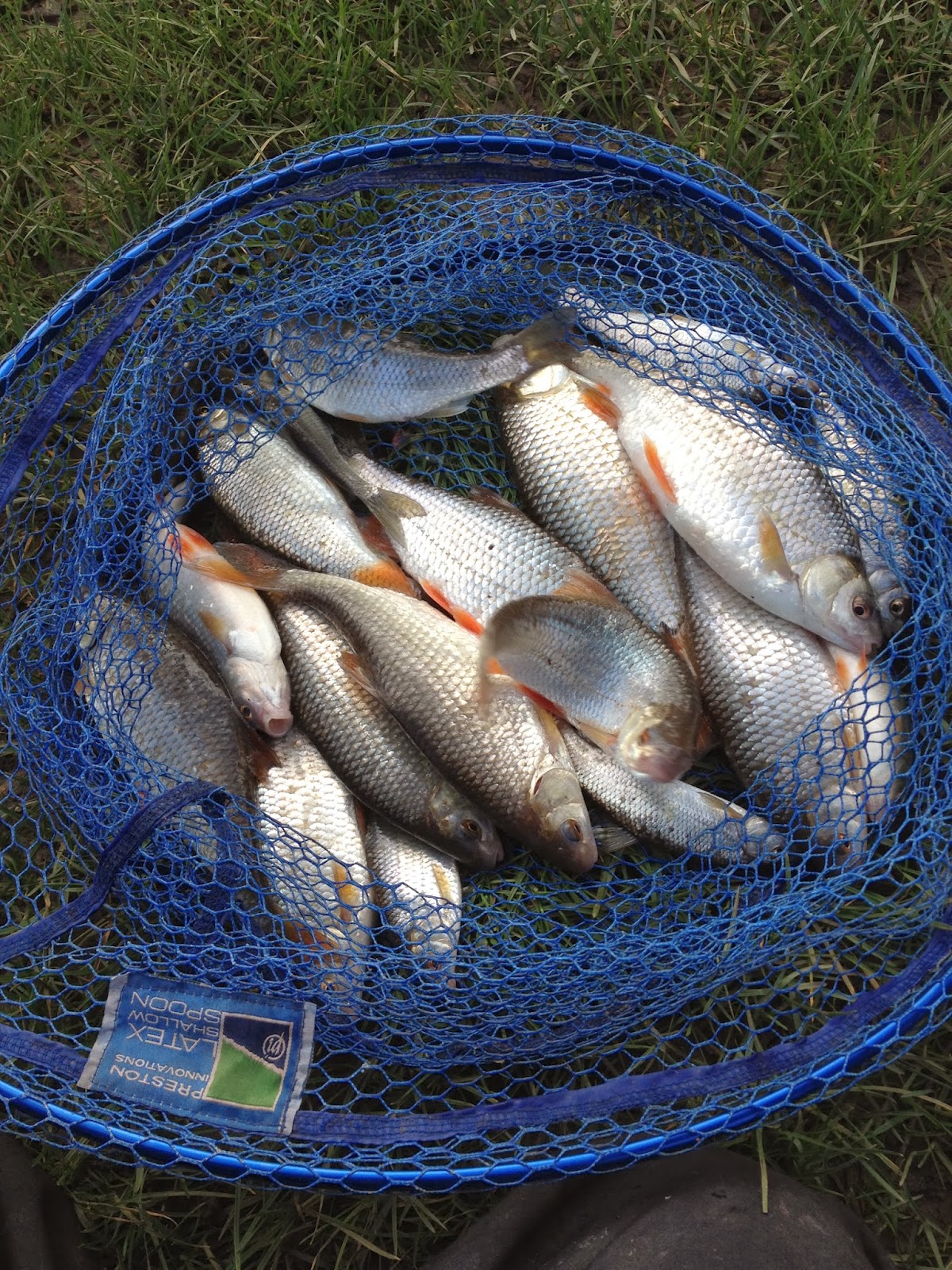