I'd not committed to fishing this league as I'd expected to be missing some of the rounds, never the less I was happy when Mike Nicholls rang me and asked if I would help out his team in round as Steve Skelton couldn't fish. I was going to be in the section on Match lake and  pegs 1 to 6 on Spring lake, with pegs 2 to 5 the likely ones to throw up big weights. Gordon Cannings was one of my team mates for the day and he drove me to the fishery, I have known Gordon since Silver Dace Junior days and the journey with him and conversation was excellent. As we were unloading the kit in fishery car park Bela and Mike drove in with the team draw, they told me I had a flyer, peg 42 on match lake. I heard how this peg had fished last round from Tim Clarke (in Avon Angling the day before) so was really happy, 50lb came off it last time and so that was my target.

The view from my pallet of the island facing me, and I can chuck to it (the peg42 sign shows that). 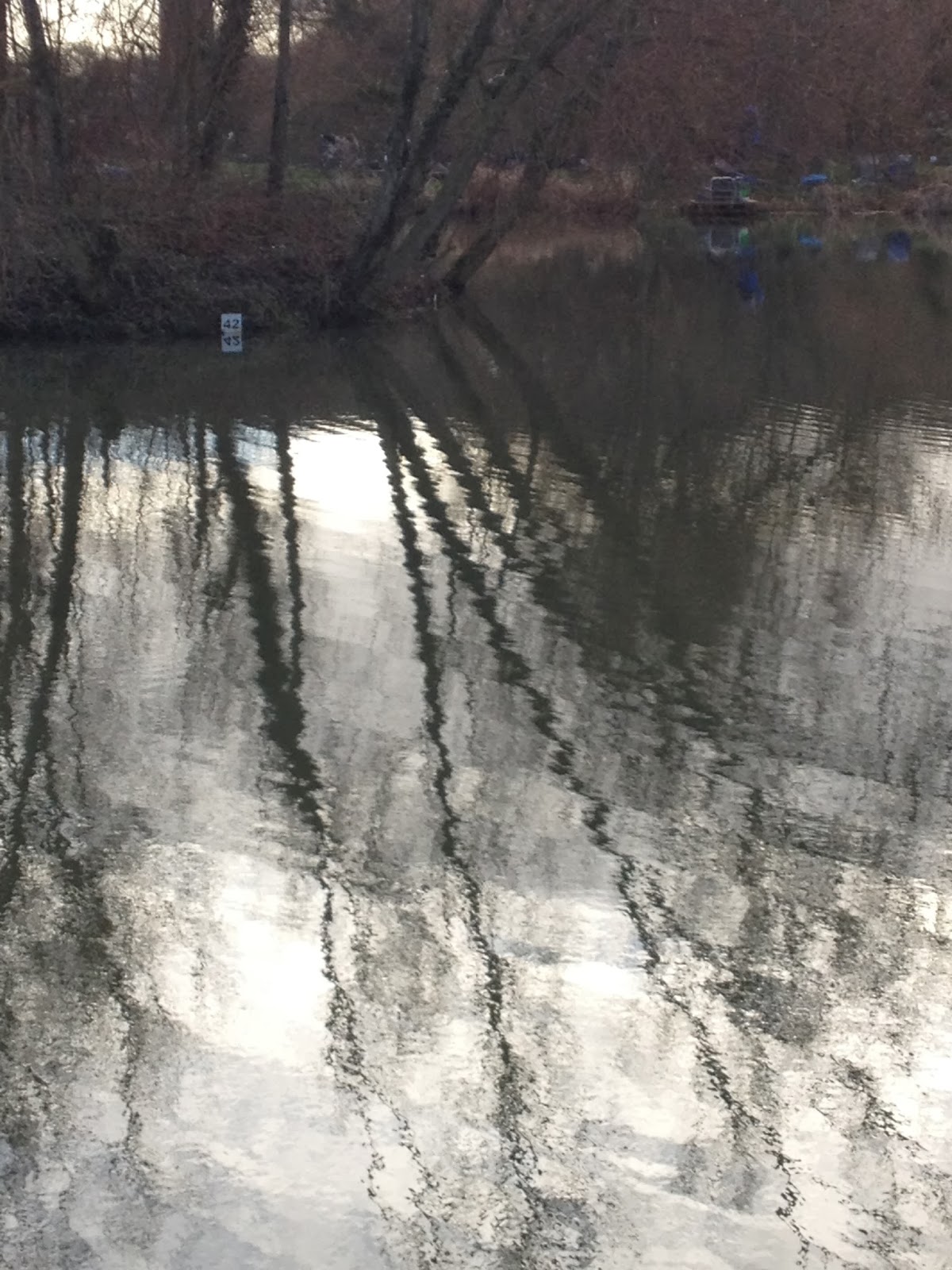 The view of my right hand margin which was where I was expecting to catch most of my fish from. 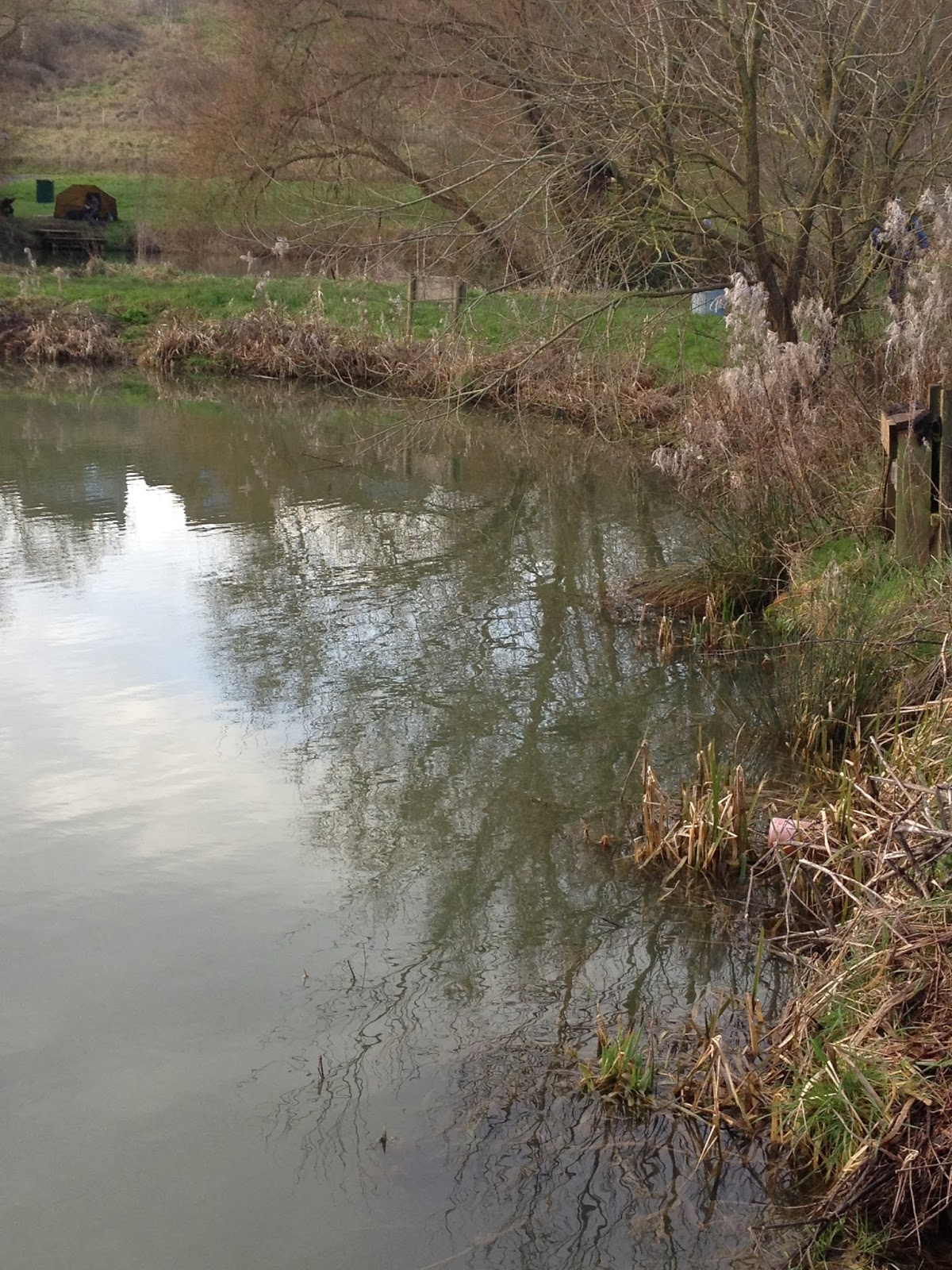 What makes this peg so good at present is the aerator has been taken out for servicing, and with no rope on the water you can fish long down the edge. Also peg 41 is left out so the corner is all mine, that's very generous! Setting up here was simple one 4x12 rig with 0.14 exceed to 18 B611. I also set up a .3gm rig to fish out in the open water over two swims but as I never had a fish from these that's the end of them!

My neighbours for the day were Mat Toomes on peg 40 (who fouled a F1 when setting up) and Glynn Reynolds from Wales on 43.

On the whistle I fed some gbait long (wasted) and some caster long (wasted), some caster, dead maggot and corn 11,5m up my right hand margin, about a metre out from the bank (by the tump of green spiky stuff you can see in the piccy. I then picked up the waggler and cast out with a single dead red. It took me about 6 casts to get a bite and an F1 was landed, but after another 10 casts and no bites and odd fish coming out on the lead I switched. I landed the cage feeder what looked right next to the bank on the clip, and within a couple of minutes an F1 pulled the tip around. Next chuck a 2lb mirror gave me a good scrap, then a longer wait and another F1 was netted, though this was a jammy one.... The fish had a piece of line trailing out of it's mouth with a shot on it, and I'd hooked the shot, lol! The island line then died for me, and a skimmer and 2 rudd told me the carp had gone. Matty had 1 F1 at this stage and Glynn 1 fish less than me.

Just over an hour had gone and after the early fish most people were struggling, but odd fish had come out of the corner margins I heard, so I decided to have an early look. I started using double dead red on the hook and I had a couple of F1's which was good and then hooked a good fish which turned out to be a 6lb carp. I was toss potting in casters and a bit of corn, and now had a couple of silvers so tried the corn and never had a bite, hmmm. It was then a case of trying different maggot / caster hook baits and within another hour I had another 2 good carp a skimmer and a perch. Mid match I had a wobble and I lost 3 foulers and bumped a couple of what I think were perch as I took a couple round the same time, I did have a couple more F1's though. Another annoying thing was that I had a number of fish swim into sunken branches that were about 4m out, the carp stayed on but a couple of F1's shed the hook into the branches, during the day I pulled 3 branches out from open water and another is still in there! This slowed things up, so with 90 mins to go I fed a pot of casters and some corn at 14.5m close to the tree in the margin. I'm sure doing this had the effect of knocking the shorter margin line, and a skimmer and 1 carp was it so I went long for the remainder of the match. A couple of F1's straight away then a couple of 6lb carp came on maggot but then two foulers, and losing one broke the float so I had to set up again. I tried off bottom a couple of times but roach always took the bait, so in the end I stuck with a corn hook bait and finished with another three decent carp to end what had been an enjoyable day.

Phil Cardwell came round with the scales and weighed me first, my silvers went 8lb 15oz and my carp 57lb, so 65lb 15oz. That was top on match lake by a long was as I think Mike Williams on 44 had 28lb. Glynn had 23lb on the tip, and Matty had 12lb mainly on the waggler, so it shows how good peg 42 really is! I ended up 2nd in the whole section as Phil had 7 carp on spring lake for 67lb 5oz, so those lost fish cost me a bit, never mind eh! What a lovely day that was, a lucky draw and good info meant I had what was a busy day with regular bites, I feel very fortunate when I saw how many people struggled, with team captain Mike Nicholls having 1 perch on spring, see his blog for tactical run down.

Mike will have all the results, I think..

Not sure yet what to do next Sunday, but my fishing will be curtailed soon as I am going for the reversal operation (again) on the 19th February, fingers crossed.
Posted by Tim Ford at 20:38