After 3 very poor matches on the Avon at Newbridge I was looking forward to fishing this part of the river which is generally much better in these low clear conditions. My involvement with this match began on Saturday when, along with my good wife Wendy, we pegged the match. Starting at Swineford I was soon in trouble with a lack of pegs (someone forgot to do swim clearing) and ended up having to put 4 pegs of B section at the top of the Crane. Wendy asked where I wanted to draw and I said Swineford. After nearly 4 hours of walking the task was done, I would sleep well tonight I thought, but a party a few doors up meant I didn't get off till gone 1am.

Sunday morning I awoke tired and the legs were a bit achy, got to the draw and I handed over the list of pegs (12 copies 1 for each team) and got a couple of baps. I was fishing for Thatchers A and I think Mark Harper did the team draw and he got me a peg in A section at Swineford, thank you! I was on what was old peg 18, and it's one of those pegs that on its day can throw up roach and chub and even some bream.

I had a nice walk today, had to lift the gear over two gates and I was nice and hot when I got to my peg, the lads in B section had to go a lot further! As you can see from the picture of my peg there is a lovely tree opposite, but really it is to far upstream to make fishing against it with a float viable, still a fish holding feature though. 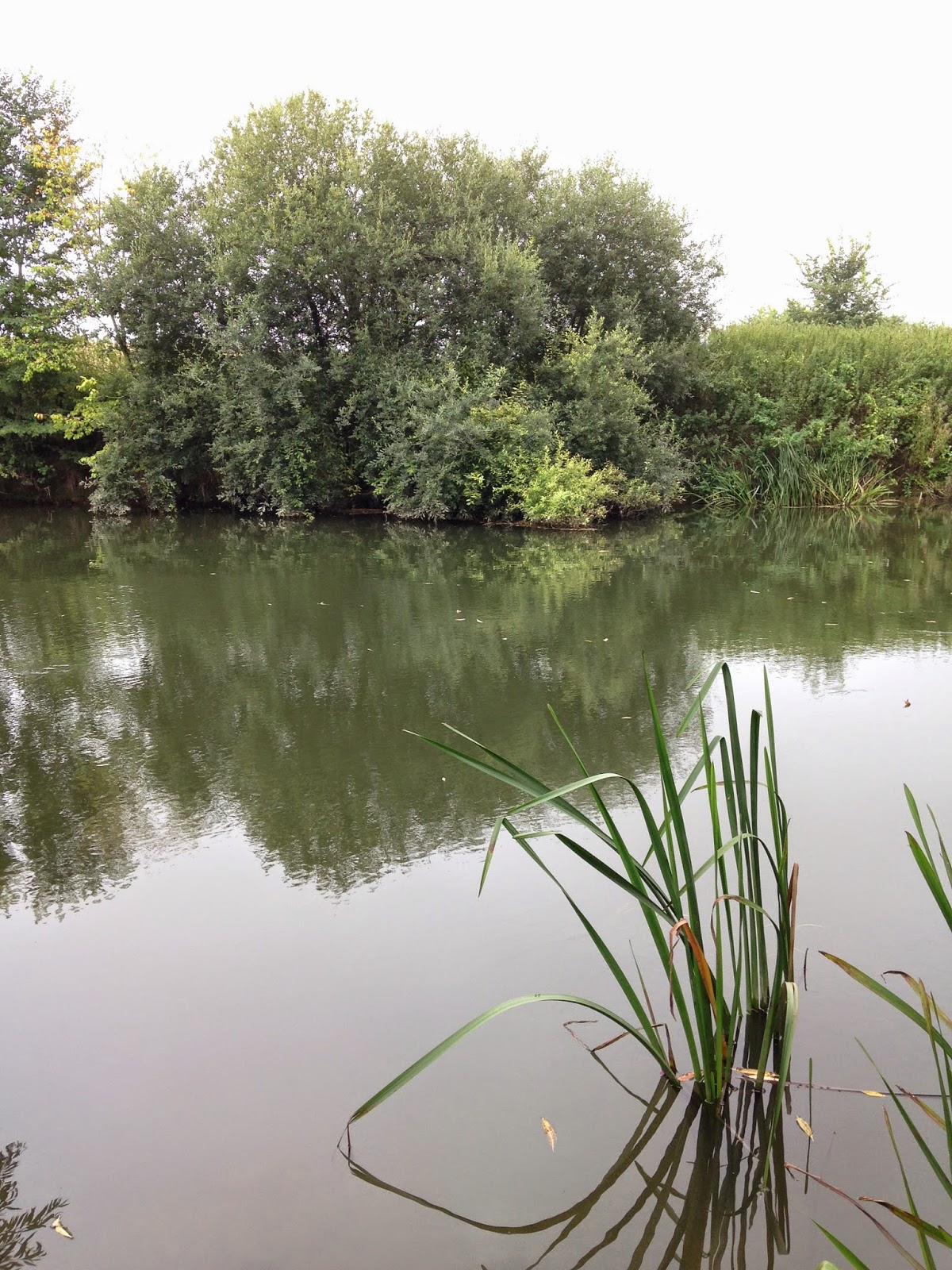 Setting up today took a while, I was going to have to wade in the river right up to my chunks, and put my box in just behind me so I could get all my attachments in place. The pole was out of the question I felt, and so I set up a 3AAA waggler with 0.14 to 17 B711, a 14BB crowquill with 0.12 to 18 B611 and finally a feeder rod was put up but left without hook until I decided what I would be fishing for on it. Downstream of me was the welsh blogger Mike Martin-Davies and upstream of me (along way above as peg 14 is blocked by moored boats) was Craig Pinker they both seemed to go the opposite way and were going down the pole route.

(Below pic shows the remnants of my tackle in the water after the match, note the keepnet high to prevent any jumping fish!) 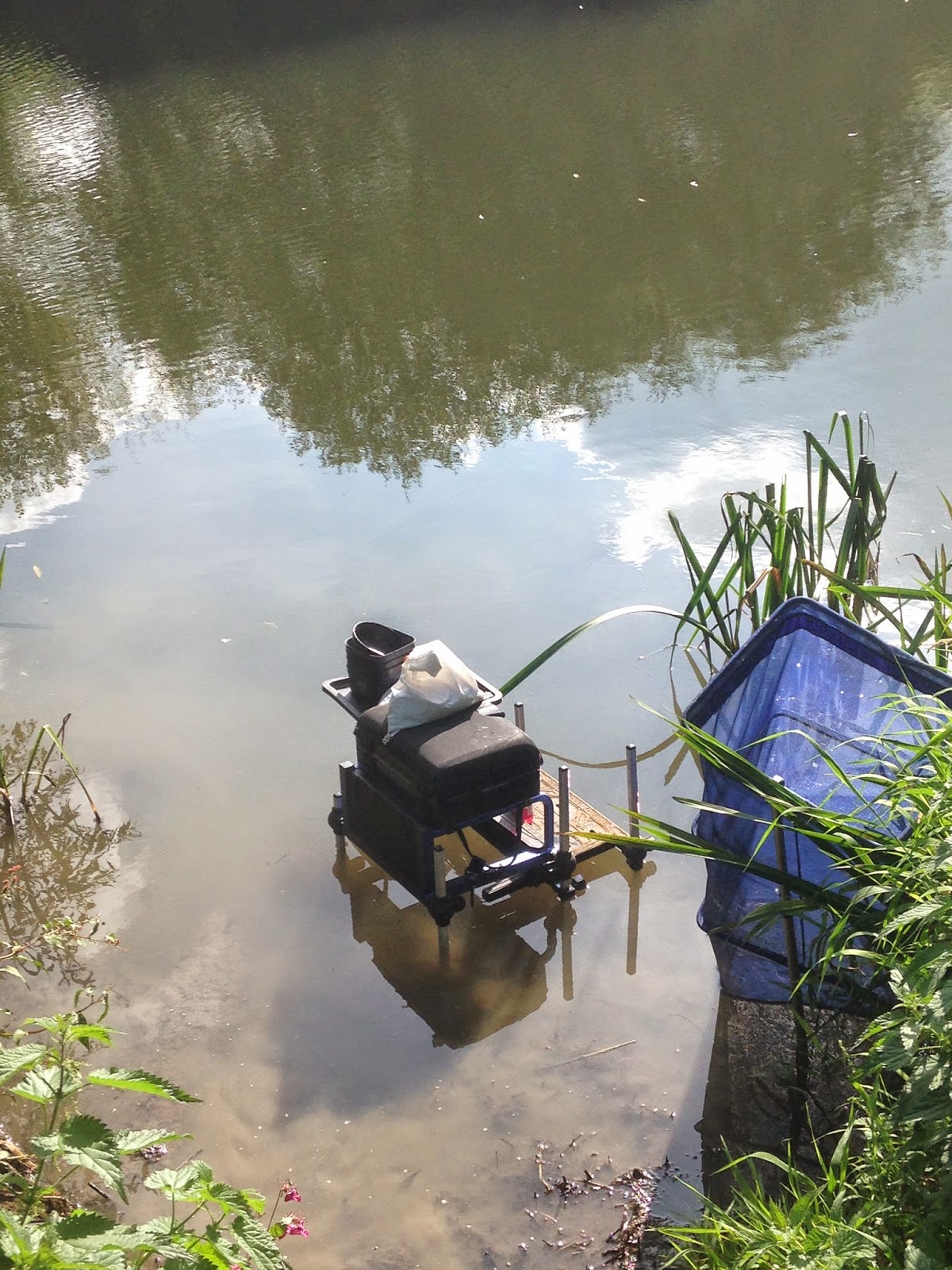 To start the match I threw in 6 orange size balls of gbait at about 14m and downstream of me. I swung out the crowquill and tiny roach was soon swung back in. Next chuck on a single caster and a better fish, a roach of 4oz and just as it surfaced a big pike went for it but missed and I lifted out the roach quickly. I was feeding hemp and casters over this near line, and feeding maggots right over towards the tree. I started to get bites I couldn't hit, and when I did it them it was very small fish, but occasionally a better roach was swung in to avoid the pike. Sadly Mr pike started to wise up and he snapped me up 4 times and pulled a 1lb+ skimmer off the hook, grrrrr!!!!! The small fish were really a problem and I was now feeding heavily on both lines, sadly this along with the bloody pike seemed to kill my crowquill line and it went dead. The waggler was a bite a chuck from chub fry and tiny dace, great!

After 2 hours I reckoned I had 3lb but I was going nowhere, Mike below me said he thought he had a bit more than that and was getting bites on the pole and no pike trouble. Word was everyone was struggling in the section getting bitted out. As the inside line was dead I decided to give it some more gbait and fired in a dozen pouchfuls of caster, this was going to be a shit or bust line. Back on the wag to give the inside line time to settle and I plugged away catching little fish and heaving in the maggots in the hope of feeding them off. After about 30 mins I picked up the crowquill again and stuck on 2 red maggots. It wasn't long before I was feeling quite smug about my change of feeding as the float buried and I knew I'd hooked a bream. I landed the fish which fought well, and it was about 3lb. Time to change terminal tackle (as I had shortened my hooklength to get through the bits earlier) and I put on a a 16 to 0.13. In the next 20 mins I took another 3lb bream and one of 2lb. Bites stopped and so I tried a straight lead and then the feeder but all were a waste of time. Back on the crowquill and a run of decent roach and no pike but they soon went.

With an hour to go I gave it another 6 balls of gbait in close and went back on the wag. The small fish were a lot less hassle now and on the wag I had 3 chublets and some perch and roach, and I had some nice perch and 12oz chub on the crowquill. This was definitely a match of two halves with the 2nd half an absolute belter! I guessed I had 15 to 20lb in total.

The scales soon arrived and Mike weighed just short of 9lb of roach, and then my fish went 19lb 9oz. Craig above me also had 3 small bream (on the pole) and he had 9lb 15oz. The next best weigh in the section was Tony Gilbert in the first field with 12lb which included a couple of bream, Clive Branson had 10lb on the waggler on the outfall. A section win today and a good result for the team.

Back at the HQ for a well needed drink I soon realised I was the best weight at Swineford and Crane. However, down at Jack Whites there were a couple of good weights including Andy Ottaway who (after calling me to moan before the start of the match that he was going to get hammered) had 19lb 6oz (hee hee) and the winner Mark Palin who had 21lb. Mark had 3 big bream on the pole and some roach, Andy had roach and chub. Below Andy was Paul Purchase and on the end peg he had a great 16lb of roach.

On the team front we had a good day and won the A division with 31 points out of a possible 36, Martin Barrett had a tough time in the parrot cage and was are only poor points. The Crane really did not fish that well today, and pike were a problem. I think the river needs some colour soon otherwise it will just get harder and the pike worse.