This year's Poppy Match had a special added element because it was 100 years since the beginning of World War I. I spent an hour or so early Saturday morning putting 30 pegs up the Crane assisted by Shaun Townsend and Jerry Pocock, with the river in flood we did our best to put the slacker pegs in and give everyone a chance. Ray Bazeley, Paul Haines, Colin Ellaway and Paul Benson put 70 pegs up Newbridge and I thought that was the best, as Swineford and Jack Whites would have been poor.

As ever on the morning at the draw there were plenty of old and great to see faces again, I could write a whole blog just on them! Sadly of course we were missing Bill Milton. I was really hoping for a draw up Newbridge as I thought a few bream would show today and 20lb would probably be a winning weight. I sort of got my wish drawing peg 124 down in the Trees, my prediction was that this area wouldn't throw up the winner but gave you a chance of framing, and I though 8lb would be a good weight. I didn't spend that long setting up and two feeder rods did for me, one with a 14 B611 to 0.16 exceed, and one with a 12 PR355 (I think!) to 0.16 exceed. I had my groundbait mix "thawed out", it was what I had used up on peg 7 a few weeks ago, I did add to it another bag of brown crumb but it was still red in colour despite what the onlookers thought!

I think it was before the start that organisers Paul Benson and Ray Bazeley walked down, we'd all been given Remembrance crosses at the draw and Bense (who wasn't fishing) decided to stick his in behind me, here it is... 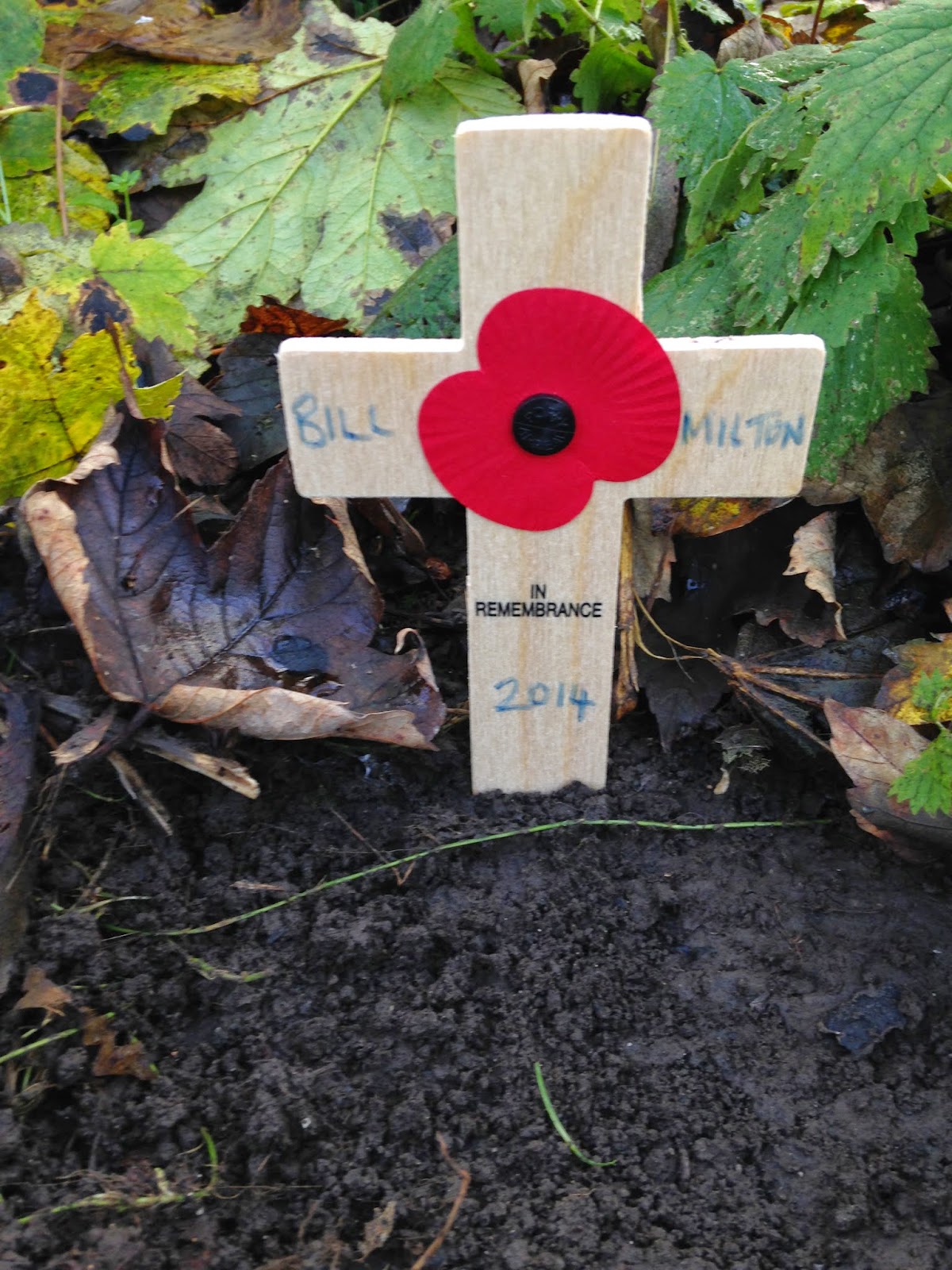 When the match started today I began on a big open ended feeder and just wanted to see what happened, I was putting plenty of worm an caster in. After 20 mins I had a small bite and it turned out to be a little 2oz eel which liked my 3 red maggots. I then snagged up and lost my feeder, but after this had a few bites during the next 60 mins on various baits; dendras, lob worm, worm and maggot, and after an hour and 15 mins I had 4 eels. I kept banging the bait and trying different hookbaits but had a quiet spell for a good hour, then I had small roach on lobworm and next chuck a 8oz roach. That was it again and another dead spell was endured, Mat Challenger (of Scott Tackle) came up for a walk and saw me miss a good bite, by far the biggest bite of the day and the lob was gone! Here is my peg and set up.. 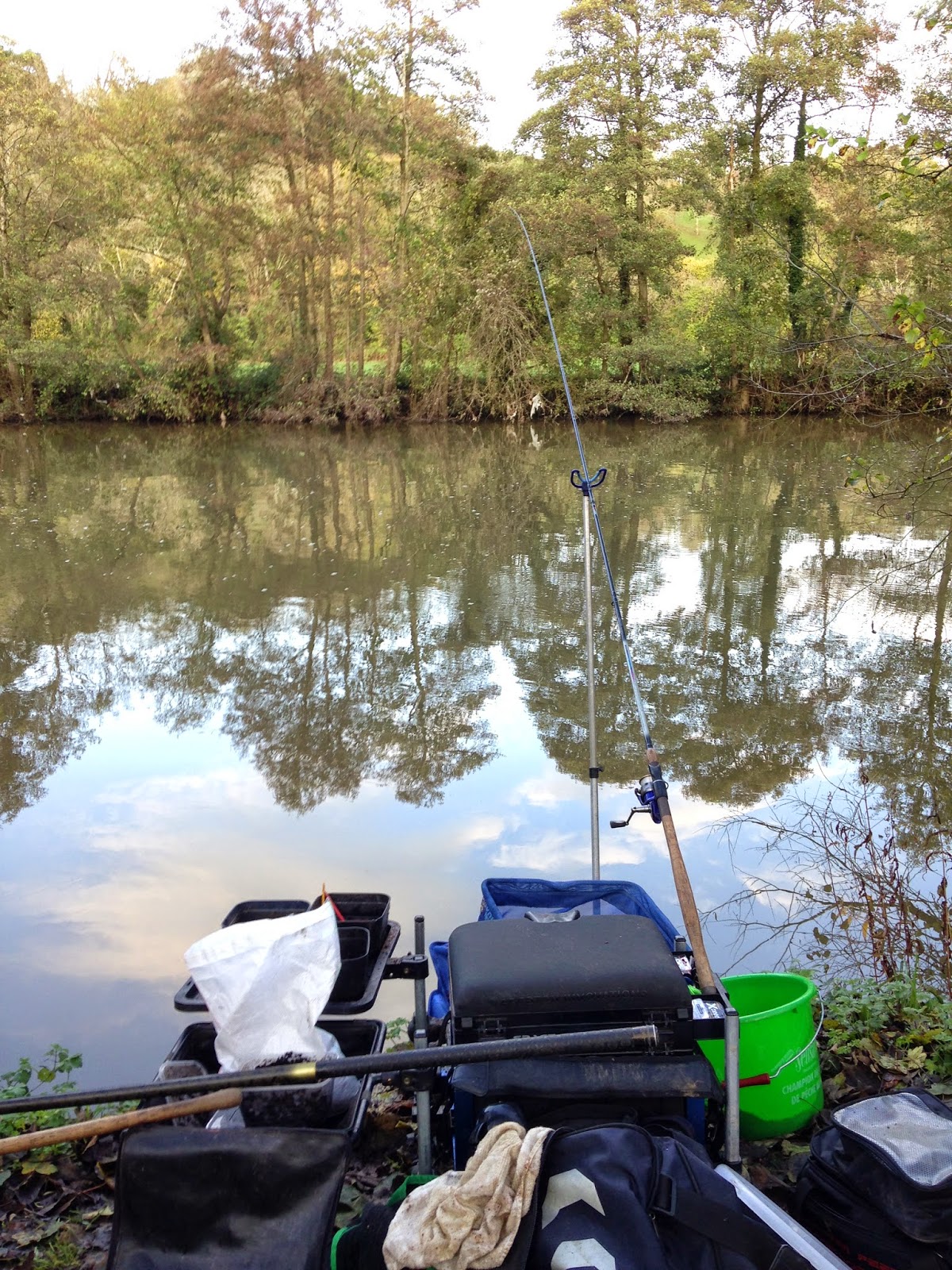 All day long it was a nightmare with bots, but by far the worst were the damn dragon boats which came up very close on our bank and then went back down stream on the opposite side. I had quite a few "choice" words with them today, but they seemed to ignore me,


With 2 hours to go I threw in 8 balls of gbait laced with worm and caster on my feeder line, which was about 12m out. An immediate bite was missed then I had 2 eels in two chucks and then it was dead again. Going into the last 40 mins I went back to trying maggots and casters on the hook and this seemed a good move as I had another eel and two roach which must have both been over a pound, the last once coming at 2:55pm and I missed a bite on the whistle.

I knew I would not be getting my hands on any frame money this year as I was well aware of a number of anglers who had bream, but my 7 eels and 4 roach weighed 4lb 8oz which won my 5 peg section. The top weight in the trees was 9lb 5oz caught by Mark Harper down in the 140's.

Winner on the day was Andy Gabb with 18lb 6oz from around peg 26 up at Newbridge, which was 4 bream, well done! In 2nd place was Simon Alder from the little Ashtip field with 16lb 4oz. Simon had 3 bream but lost 3 (ouch) this was the second time he's come 2nd! In 3rd place was team mate Liam Braddell who was in the first field at the Crane, and he had 11lb 13oz which included one good bream and some nice roach and eels. Here are the winners and organiser Ray... 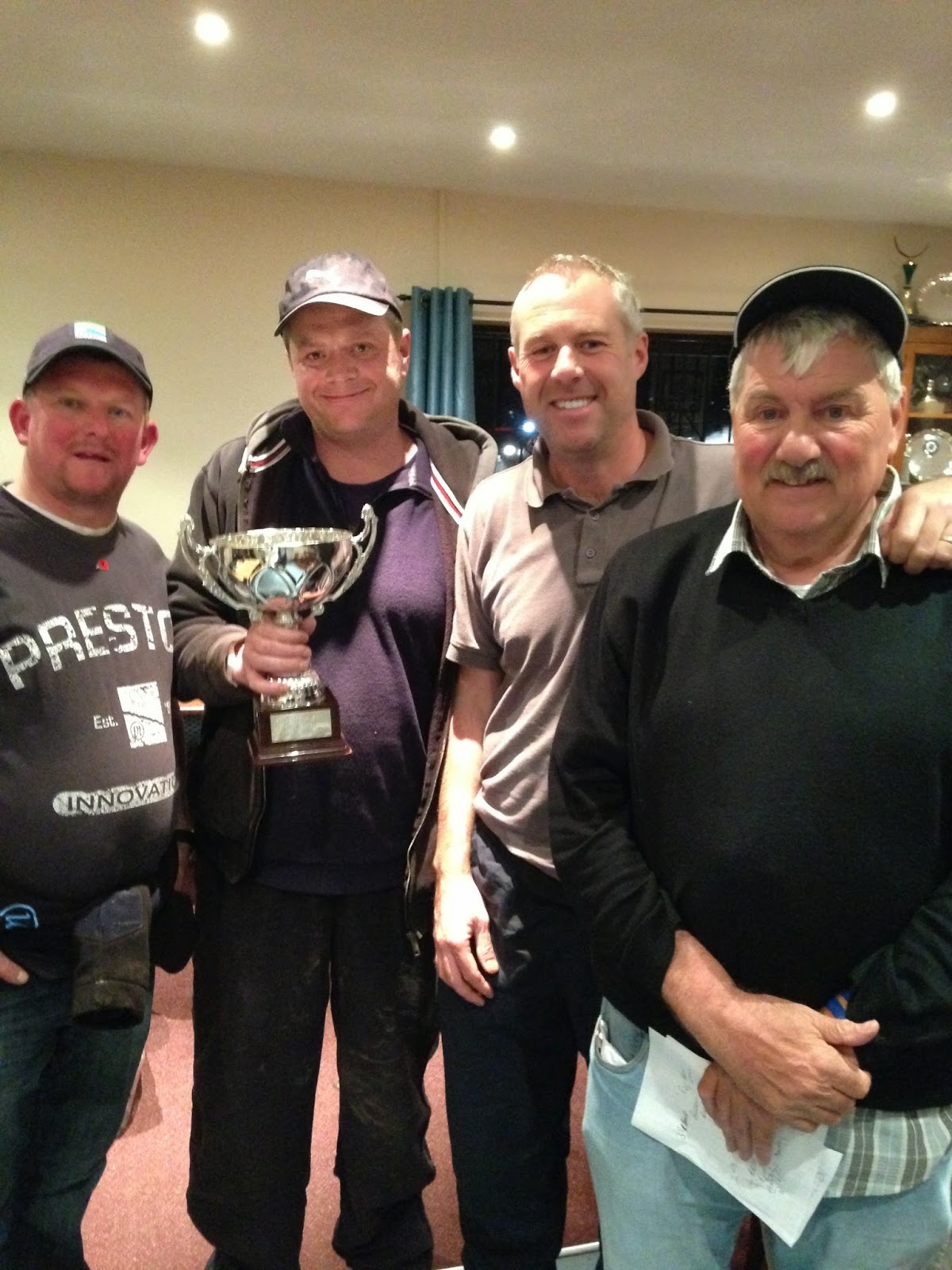