A Day On The River Tone

Sometime ago angling journalist and all round angler Chris Ponsford had found my blog and he told me he really enjoyed reading it. I remembered Chris from nearly 30 years ago when he match fished in the Bristol / Bath area, but one day he disappeared. I think it was through Facebook he found me again and found the blog, he recently said we should meet and go fishing and I was well up for that.

So it was that I found myself in Sainsburys in Taunton waiting to meet Chris and another "old" angler Nigel Ainscough (he used to work in Veals when I was a lad). I'd already sneaked a look at the River behind Sainsburys, and found 2 anglers unloading their kit, but this was not where we were going to fish. We were off to the town centre where I'd fished in the summer with Brian Gay, Shawn Kitteridge advised this was the best place.

After a little recce and Chris announcing it "looked shit" (I couldn't disagree it looks nothing special lol) we grabbed our kit and found somewhere to fish, the banks are a tad steep but there are some flatter areas, we chose the steep ones!  This was my far bank. 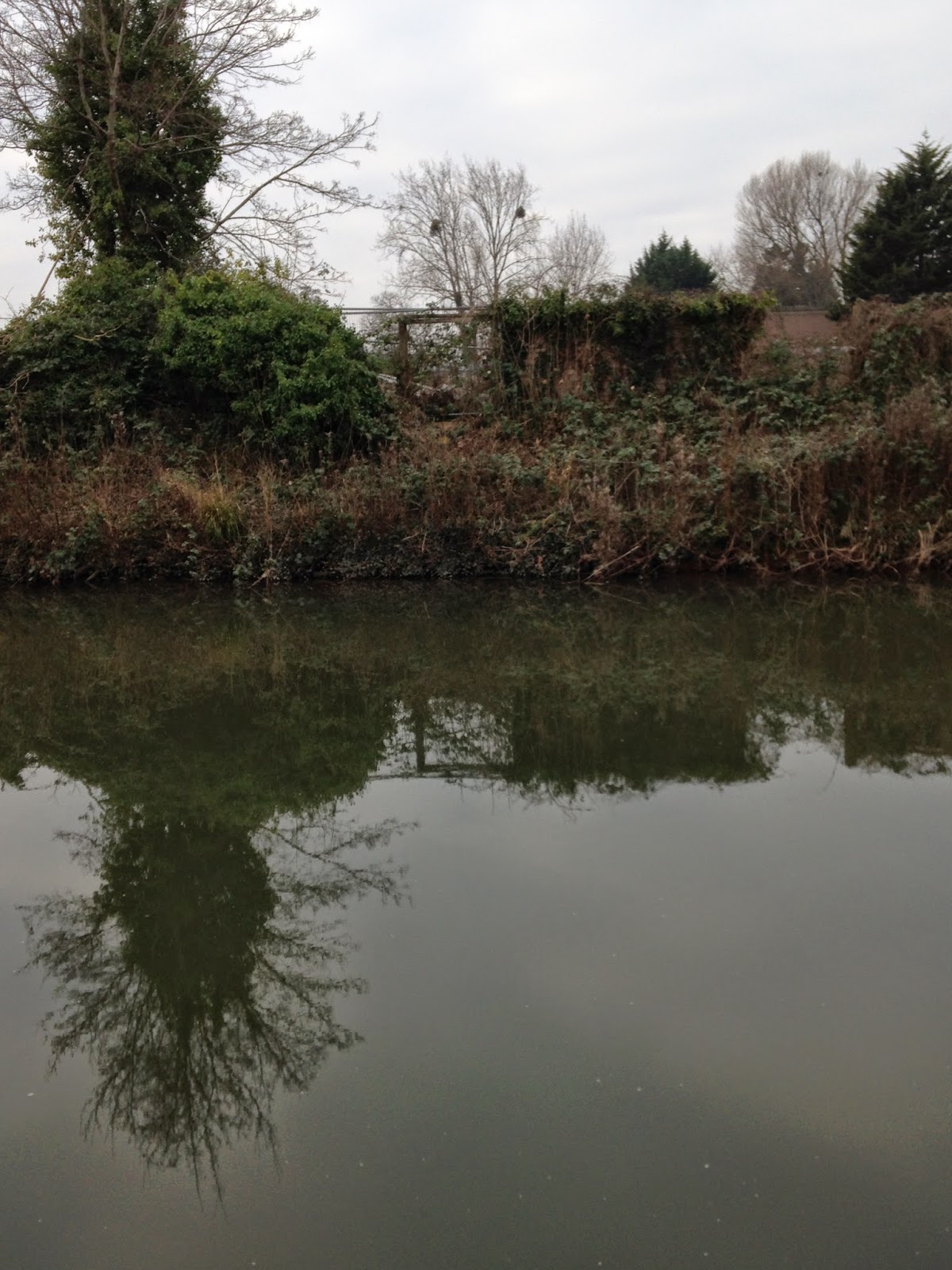 As far as setting today it was a simple affair, waggler and that was it. A small insert 3AAA model with 1 no10 and 3 no8 down the line to 0.11 exceed to an 18B611, I was expecting to catch chublets so saw no need to fish lighter than this. As I was setting up I did fire the odd pouch of maggots in to try and get a few fish feeding confidently. Nigel sat below me and Chris above, we all had plenty of room, and all fished the waggler.

I think I was the first one to cast a baited hook and began with a single bronze maggot, the float didn't travel very far and dipped, my resulting strike didn't hit much resistance as I had hooked a bleak. Next chuck and the same result, and then a small roach. It was good to get bites but I wanted chub, so on with double maggot. Sadly this did not get the intended result and all I did was miss bites from the small fish. I was feeding around 30 maggots every cast and stayed with this for now, switching back to single maggot I started to hit bites again and the quality of fish improved with roach to 4oz and chublets around 6oz. The next hour was pretty good and I got into a rhythm, I was feeding just past the middle of the river, casting on the far edge of the feed, and if I missed a bite I let the float then run down on the near side of the feed.

Above me Chris started quite well with regular bites, but from the off his fish were on the smaller side and also caught small trout. I took this pic of Chris setting up on his slope! 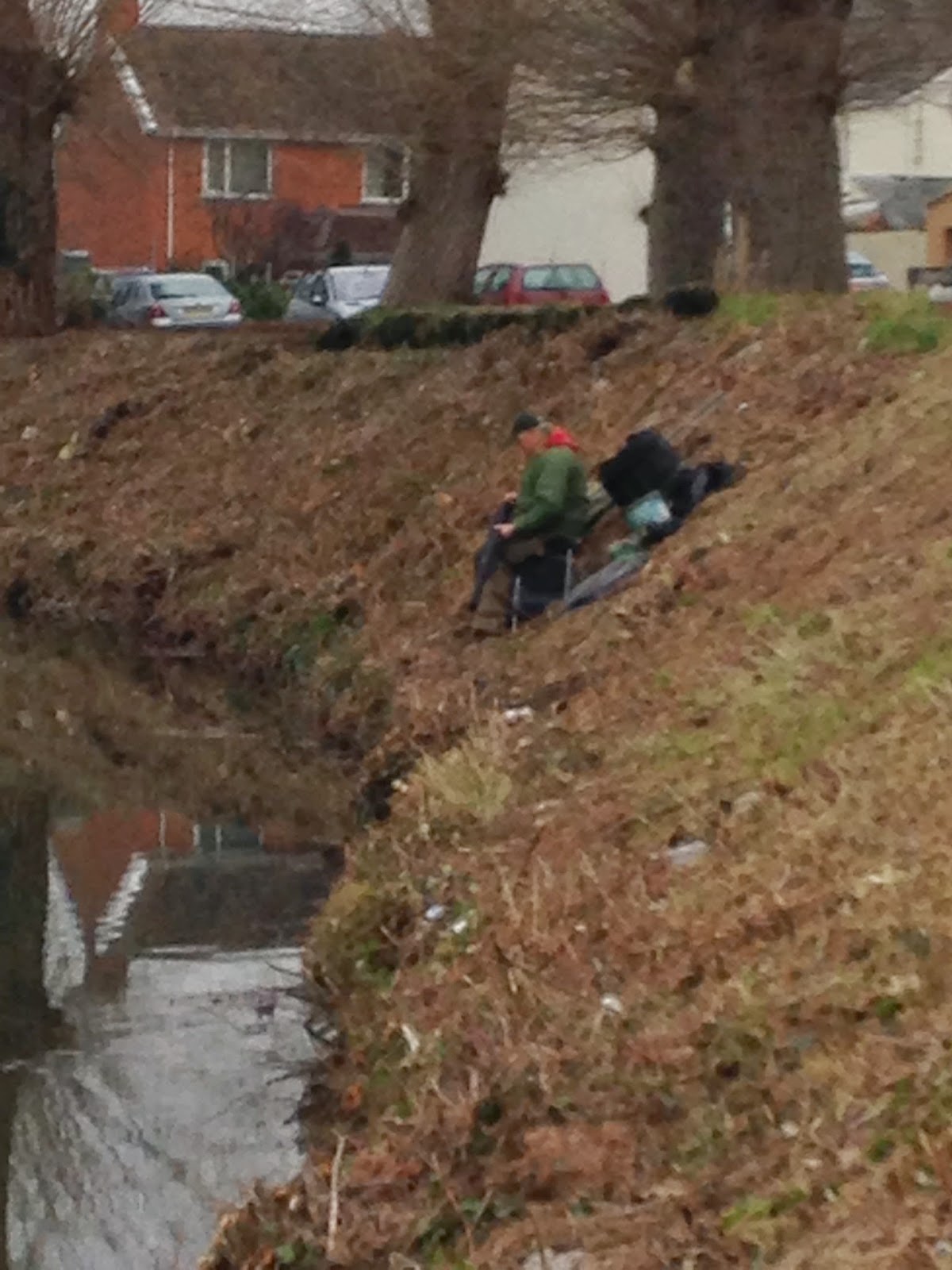 Nigel below me was struggling to get bites and only had a handful of roach. From the off I had been fishing about 4ft max, I had not plumbed up I just guessed the "chub" would feed at this depth. After a couple of hours bites were getting harder to come by, but everytime I thought I need to go deeper I would get a chublet or a roach. I had taken a couple of minnows, a ruffe, and a very small grayling and I went back on two maggots. After a quiet period I took a few 8oz to 12oz roach in a short burst and Nigel popped up to see me catch a couple. He said I was fishing shallower and feeding more than he was, and he went back to his swim with renewed vigour. Chris was now struggling for the odd small roach, and still the odd small trout!

My swim then got really tough, I could blame presentation as it was quite good for most of the time thanks to an upstream wind. I tried deeper but snagged up and gave that up as a bad job. I cast all over the swim in search of the fish kept  trying different feeding but nothing was working and just the odd tiny fish showed and another 2 grayling. Coming towards the end of the day I had fed some maggots at 6m, I deepened the waggler and tried on this line, a couple of roach and 12oz chub which I landed in a branch showed up. Back across and I caught a couple of better roach deep. What I now realised was that there were snags coming up off the bottom, and I could cast in some areas and avoid them. The last 30 mins were better and I even managed to sneak a couple of Chris's trout!

My hands were freezing, in fact I was feeling cold all over and when I caught a roach I decided that was the last cast for me. The river had fished much harder than we'd hoped (30lb+ bags were what we were told to expect) but we'd had a good day working at getting bites, proper old style fishing.  Chris asked me about some of the names of anglers he'd fished with in the past most don't go now, but a few do and it was good to share stories from years long gone.

Chris took these catch shots, we reckon he had 8lb, Nigel getting on for 10lb as he had found some nice roach and chublets late on, and myself 16lb+ (You can tell Chris take profession pics.) 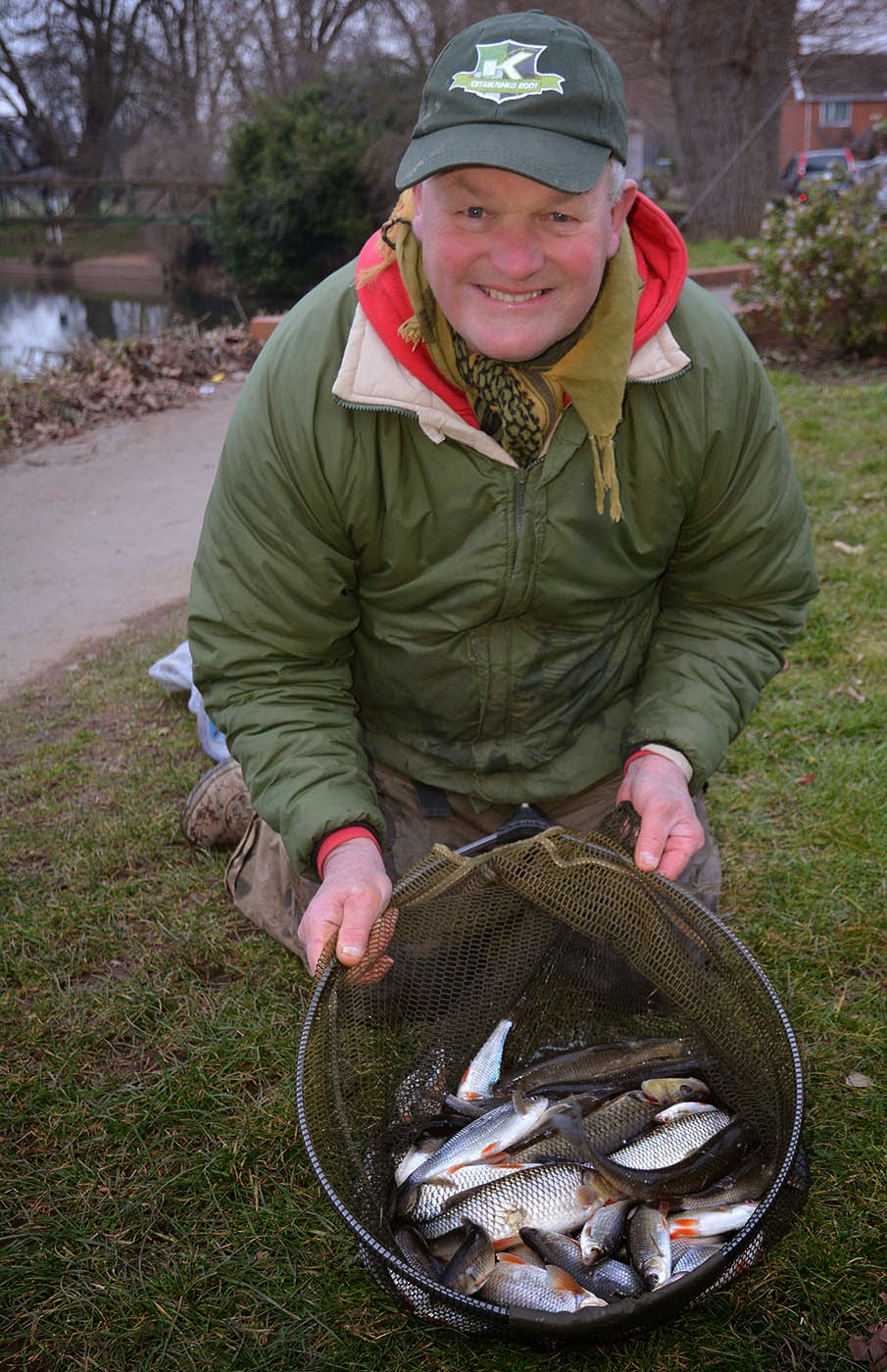 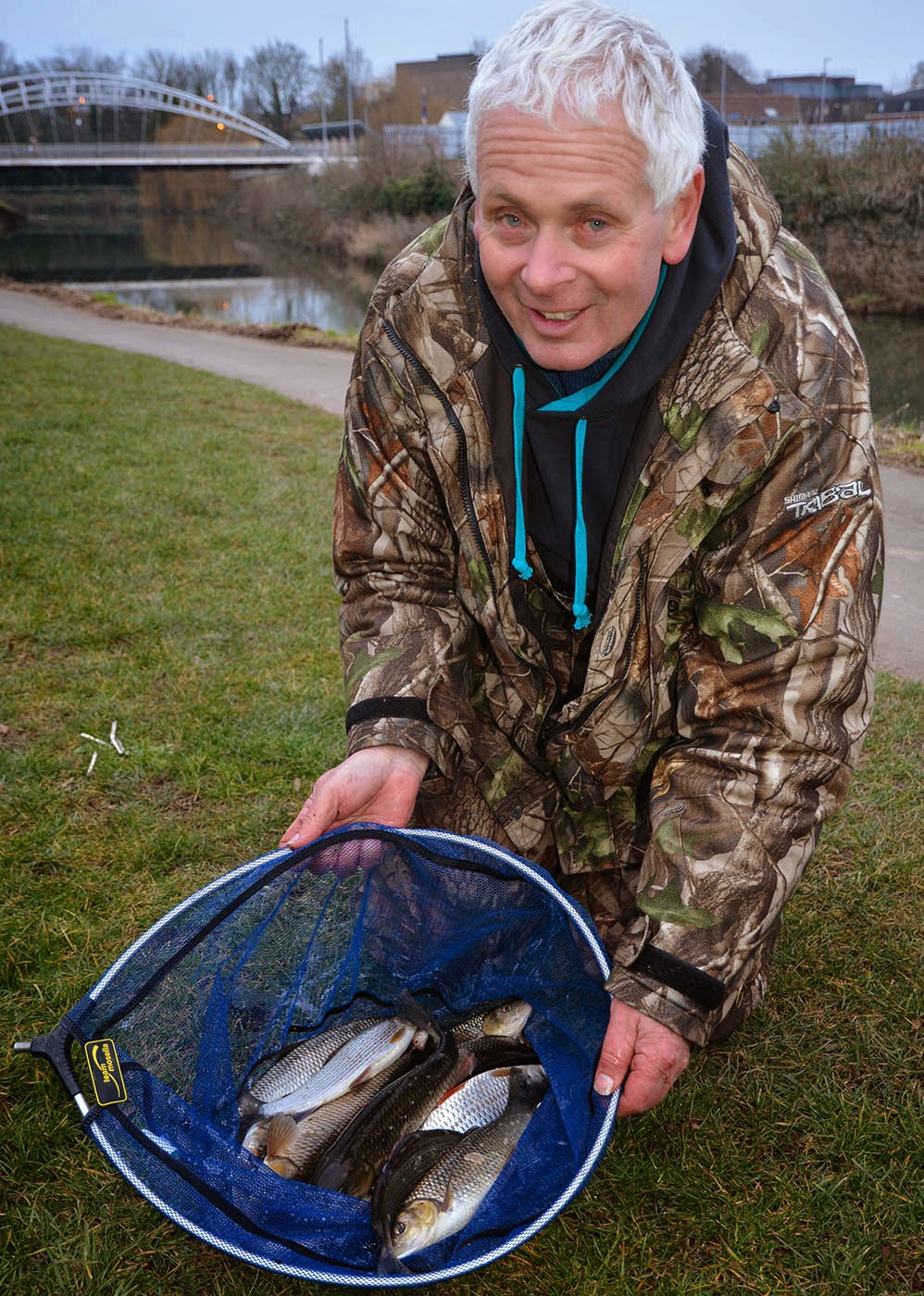 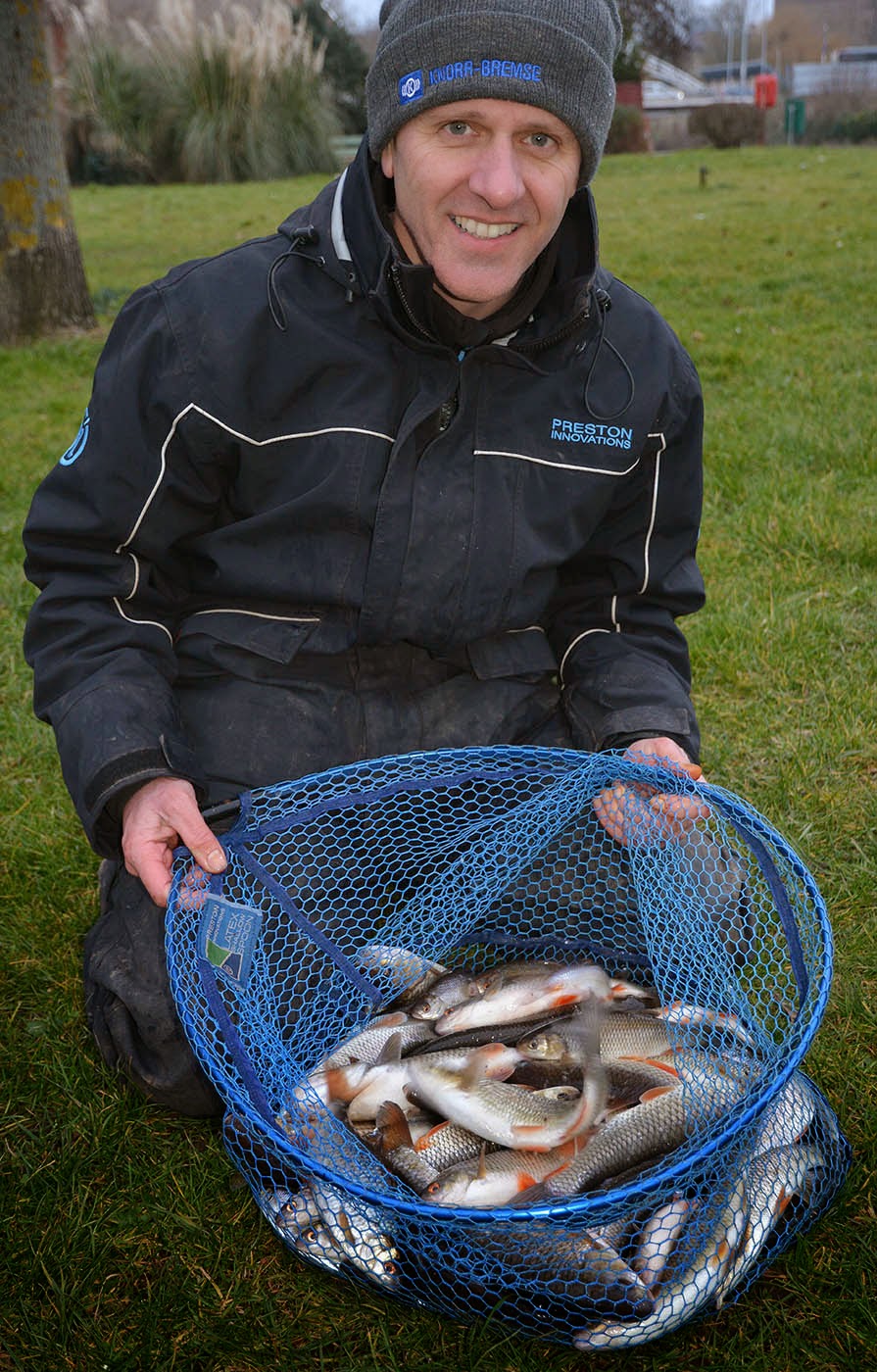 So the end of another days fishing on the river, it winds me up that within a month we cannot fish them until June 16th, just when the fish want to have a good munch!