Decided Saturday looked the best option for a match this weekend, and that also fitted in with Glenn Bailey's plans so we travelled together for another bash at Hill View. I drove and as I got to Glenn's house I realised I'd left my keepnets at home, Glenn gave me a couple so that sorted that out. Literally filled my car with no space left, it took a few attempts to push and pull things to get the boot to shut properly.

I had received some info from Des Shipp who had won the match on Wednesday and I had managed to put a few rigs together on Friday evening, the primary bait catching it seemed was maggots. I had plenty of grubs as Glenn picked me a few up to go with those left over from Thursday. Once at the fishery I sat and had some brekkie and also met Norman Sterry and Sean Clayton who are giving it a bit of a go up here at the moment. I was still putting my bib and brace on when I saw the draw had begun, wandering down there were still plenty of discs in the hat and I pulled out 29 on Heron. According to some it can be a good peg because you are an end peg (30 is or was left out) and there used to be an island opposite, lol (well it made me laugh). Glenn drew peg 9 on Moorhen, and was also an end peg on his bank. See my island-less peg! 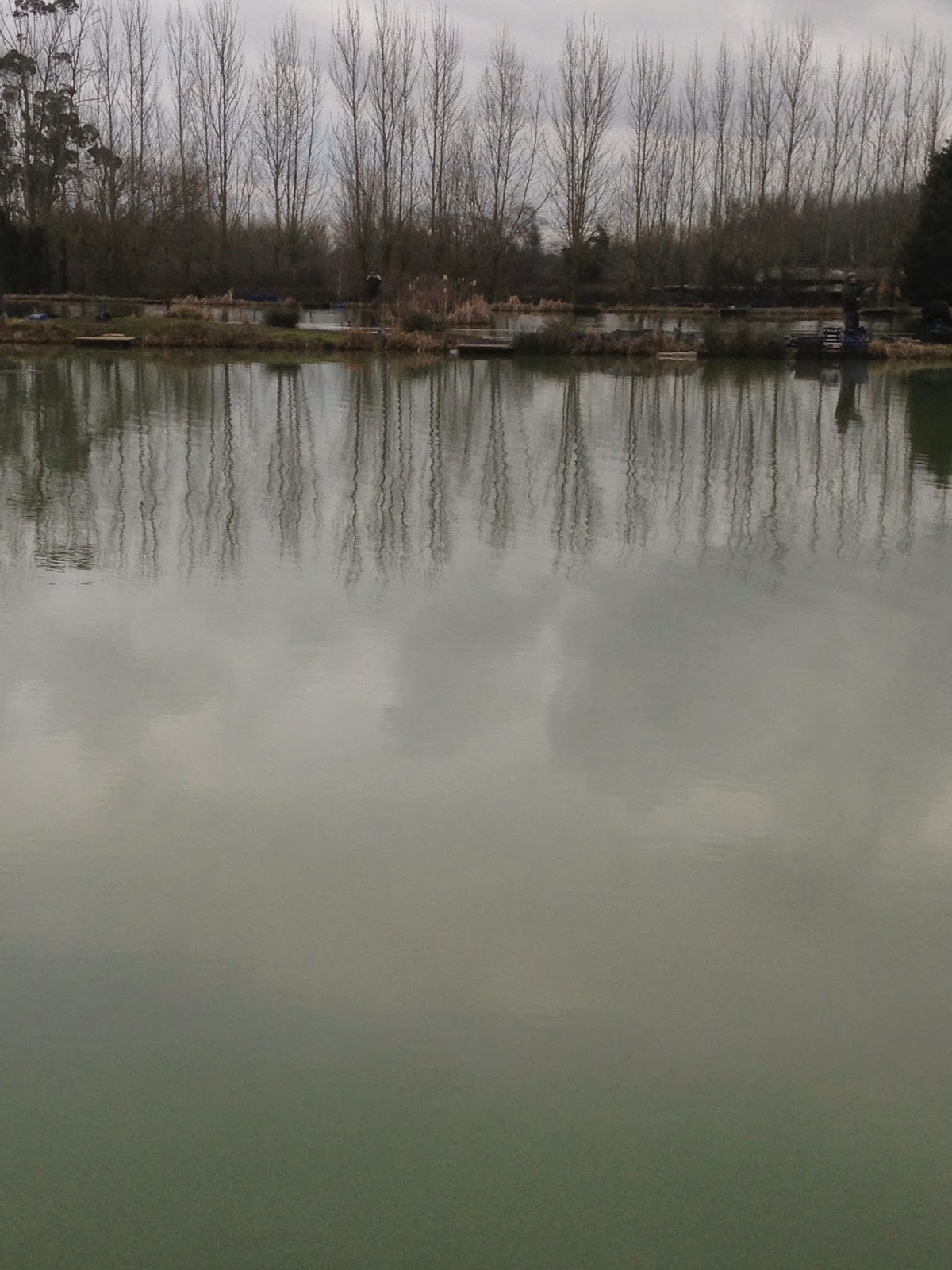 Got to the peg and on next peg 28 was Welsh Wizard Phil Weaver. I have fished matches against Phil for 20+ years, I first knew him when he fished with Celtic Bait, he told me he now only fishes commercials and likes to target the F1s at Hill View. He also kindly told me my peg was really good in the summer! Getting on with setting up I put up a waggler as the lake was flat calm, I set this up with 0.117 exceed to 18 B911 so I could fish either double maggot or corn. Pole rigs were all to be based around short lines from what I seen and Des told me the long pole wasn't doing much damage. I plumbed up at 6m in front which was at the bottom of the shelf in about 5ft of water, and with the same sections but went to my right up the shelf in about 4ft of water. The rigs used here were 4x12 Chianti with no 9 and no 10 stotz, with 0.104 exceed to 18 PR434 aimed at fishing double maggot. I was really hoping to exploit the long margin to my right, but what I found was less than 2 foot of water coming out from the bank a long way, 5m to 6m I reckon, and I was a bit confused where to fish! In the end a 4x10 with 0.12 to 18 B911 was set up for 13m down the bank and a metre off, not sure why I mentioned all that as I never had bite here!

When the match began I fed about 50 maggots on my 2 pole lines and started on the waggler with double maggot, as the there was still no wind I fed my waggler line with the catty. After around 10 mins I had a tiny indication on the float and struck, lucky I did as I landed a 1.5lb F1. Fifteen minutes later and another F1 was in the net, Phil was worried as he had no rod set up. However, he needn't have worried, as the wind got up and made seeing the float very difficult, I couldn't feed in the same spot and roach became a pain. This all added up to me trying the short pole line. Dropping in straight in front with a double maggot the float settled and within 5 seconds dipped, sadly it was not the hoped for F1 but a 4oz roach, and the next drop a roach, and the next..... Now this would have been fine if there was a silvers pool, but there was not, so I had to try and feed them off and started feeding by hand with larger amounts.

An hour and a half in I had my 3rd F1 and my first one on the pole, it was a loner. Phil was struggling with no F1s, he had silvers plus a fouled 2lb carp, unfortunately down by the car park end of our lake the 5 anglers were all getting among proper carp and the writing looked on the wall already. I fed heavier with maggot and that killed the silvers for a while but I didn't get any bites. Phil tried corn on the pole and he had no bites either, it was obvious to us that we had no carp in our pegs and if there were any F1s they weren't feeding. The guy on the top bank (peg 32 I think) was catching F1's not fast but odd ones all day. Such was the amount of carp coming out below Phil he went off to find a mate and borrowed a waggler rod to try to get nearer to them, but that didn't work either.

With about 90 mins left I reckoned I had 4 F1s and about 7lb of roach. I was on the wagg at the time when Phil took his first F1 on the pole, and then he hooked a carp, I was quick to follow suit and I had two F1s in two drops and then a 2lb skimmer. I though this could be it bagging time, but although it was a lot better then the previous 4 hours, the F1s wouldn't stay in your swim long, but it was interesting fishing. When the match finished I thought I was going to be near last on the lake, but it was a case of having had bites all day but from the wrong species, it was obvious late on when the F1s were in the peg though as the bites from roach stopped.

The lad on the top bank had  a nice steady day to end with 54lb of F1s, but he didn't get any coin. Surprisingly myself and Phil both weighed 31lb, so honours even and I was happy with that. Our section was won by default with 46lb, this was on peg 26, and on 25 Corky won the match with 92lb of carp and F1s on..... PASTE! Opposite these lads on pegs 38 and 39 they had 72lb and 48lb, Which just proved the carp were sat at that end of the lake. Glenn had struggled for a long period of the match, but late on the F1s were in his margin and he ended with 23lb, with only 29lb winning his section he was only a few fish short.

I found out that the area I was in has been full of silvers recently, which kind of tells its own story. I take my hat off to the winner fishing paste, I would never had thought to have done that. I am sure that had I been sat on his peg I would have caught carp on my maggot approach as the silvers were pushed out, though I doubt I would have had the same stamp of fish or as big a weight. Just goes to prove we have to keep our minds open, and when you do get drawn on fish do what you're confident in. A quick piccy here of half of the winners fish, a right old lump in there! 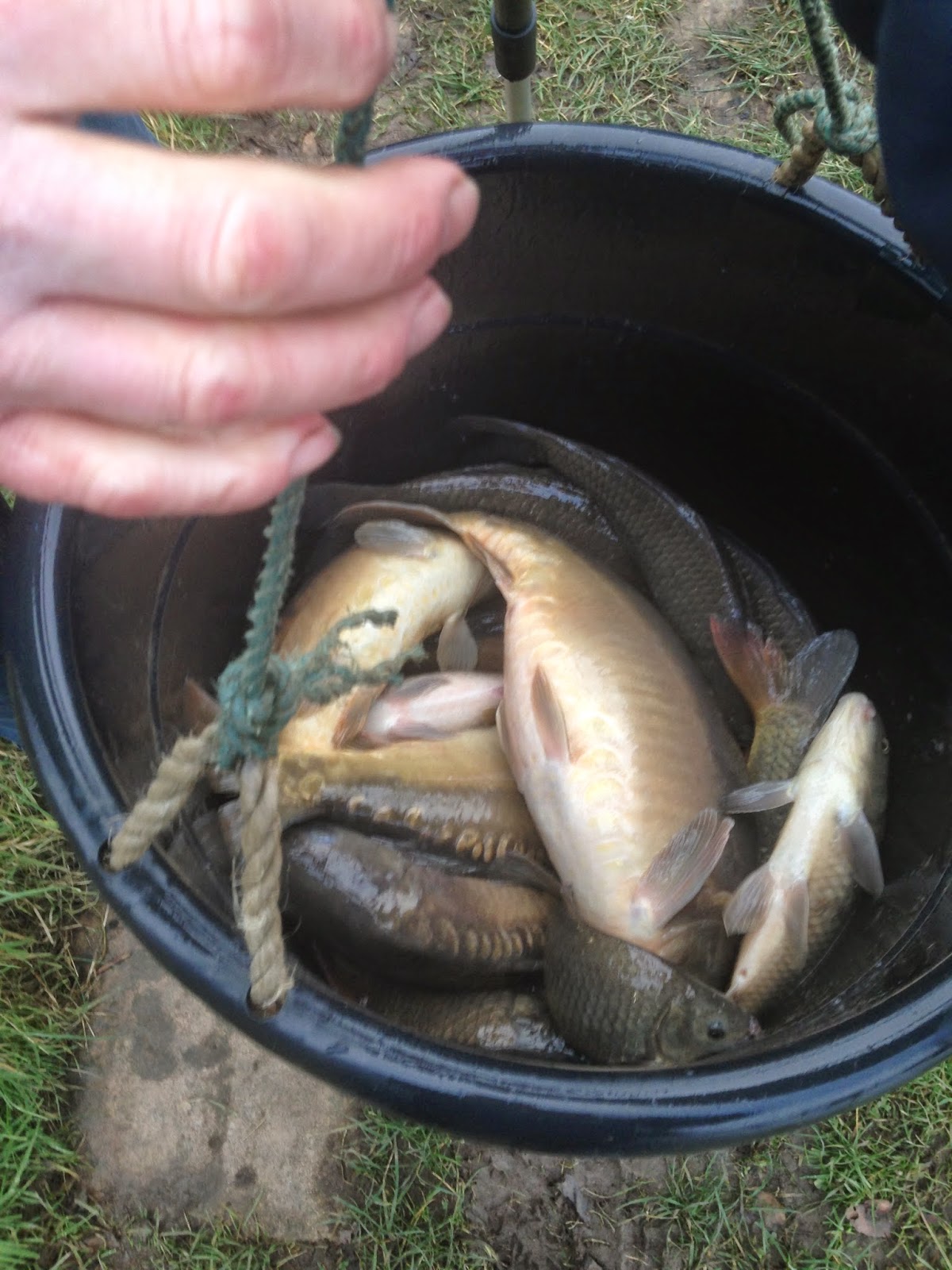 All in all you can't fault this venue, 9:30 draw, fished 10:30 to 4 today. Brekkie on site, beer on tap and plenty of bites, even if it was from the wrong species lol! I know I have a lot to learn about this place, and that intrigues me, I think I want to keep going and try to work things out a bit, drawing on a canal would also be a test, but as the weather improves hopefully so will the fishing. Looks like no fishing next weekend for me as my daughter is popping home for a few days from University.
Posted by Tim Ford at 12:09