After a fishing free weekend I was very keen to get out again, but I couldn't decide where to go or which day. In the end the weather helped make the decision as the wife and I used our National Trust membership to visit Lacock Abbey on Saturday which seemed the better of the two days (river looked nice up there). Plan made, I was making rigs Saturday evening for a visit to Hill View Sunday. When I went to bed I thought I was mad as the wind was really blowing up and it was meant to be 20mph+ Sunday.

Travelling on my own today and I arrived in good time for a breakfast and a chat with Gabriel Skarba and Andy Gard, both made me laugh. Andy told me he'd fished here the day before and came 2nd, but he'd arrived very late after setting off up the M4 instead of the M5 PMSL! I think there were 19 fishing today and Keith decided to put us all on the back 3 canals which he hadn't pegged yesterday. I fancied a draw on the 3rd canal as the wind would be off your back, but I drew the 4th canal and peg 91. Glenn Bailey has drawn this a couple of time this winter and really struggled, but apparently on the rover on Weds it won the match. The water was coloured and that was bound to help the fishing I hoped. I will be honest and say I wasn't overly confident of getting some coin today as on peg 93 was the venue expert Neville Groves (he'd won the day before) and I was told the lad on 95 was another good angler and was tipped to do well. Ah well I was looking forward to it anyhow! 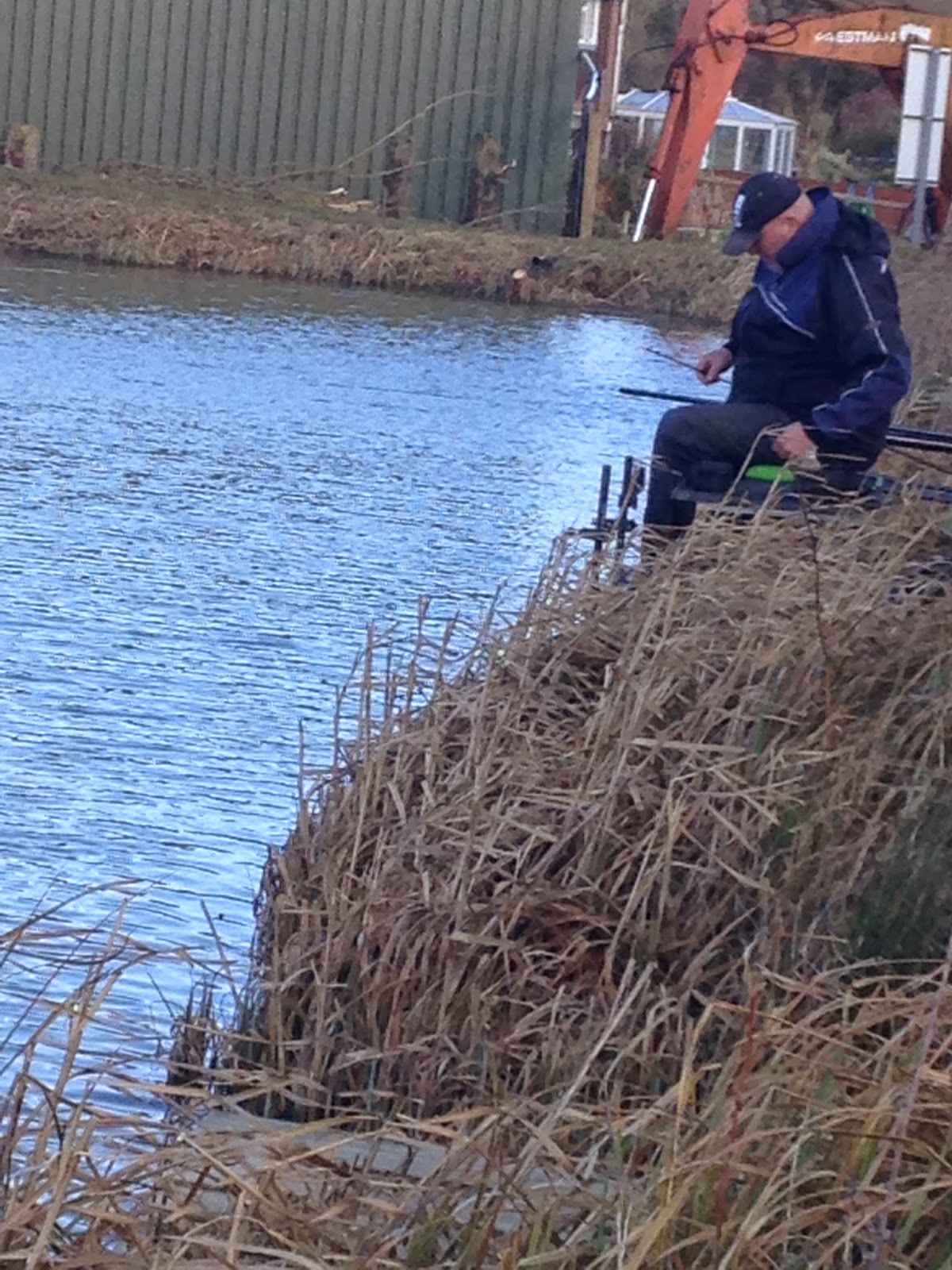 Setting up was done with the "wind" in mind, I laid my Preston Shuttle on its side, positioned some bags so that my pole would sit up against them, and didn't bother with pole rollers. I set up just two rigs today, a 4x12 Chianti which would do for across by the reeds and the margins. I also set up my canal bread float, 0.4g Preston PT4 which was a brain wave I had yesterday. I went for this due to its wire stem and pencil shape, and extra weight to combat the wind, both rigs had 0.117 Exceed to 18 PR434. I had micros, maggots and corn with me today, did have soft pellet hookers but that was no use. On the all in I fed a cad pot of micros and maggots at 12m which was just short of the reeds and that was it for now. I shipped over with double maggot and saw that Nev had a carp in the net already! Luckily my float also zipped under and I had a 1lb carp, next drop a tiny tench, and then another, then a 8oz carp. After 30 mins I was just getting tiny fish so stopped feeding maggot and went out with corn on the hook. It was slow to begin on this and I had another tiny tench and small carp. I was feeding micros still with a couple of pieces of corn, and I then landed two fouled carp in two drops. The carp were not huge but anything between 1 and 2lb.

An hour gone and as far as I could see I was doing much better than my neighbours and they had already given up fishing the far bank. The wind was not too bad at this stage but I was using my short no4 section and 2 feet of line above the float to keep control. Things were now slowing up for me and it was taking longer to get a bite, occasionally I'd get a liner from those carp which seem to swim through at about half depth. I was now feeding maggots on a short line (top set +1) and at 8m, also a bit of corn in the margin. Nev had a run of F1's at 8m but then struggled again, so I stuck it out across. I had a few more F1's across, but was not sure really how much bait I should be feeding, was I feeding too much or too little. I wondered this because I thought I wasn't catching well enough now, but was wary of giving it too much in case I killed it. I decided to rest it and come in short, I had a gudgeon on maggot and then a 1lb carp on maggot but one more missed bite told me there weren't enough fish on the short line yet, A look in the margin next to a nice looking straw bale and my corn bait was snaffled almost straight away. Sadly the fish found a snag next to the bale and I had to pull for a break. Nothing else here and it seemed a bit snaggy.

Going back across it was quiet at first, but by feeding a little more corn and micro I had another run of fish..... and then the first storm came! I couldn't fish over and came short for 15 mins for just 1 little tench. This storm passed and I went across and had a bit of a struggle as the wind was worse and I was really hanging on at times, I hooked an F1 and the pole was nearly ripped from my grip by the wind, but the fish stayed on. Nev was now bagging on F1 and carp in his margin and I guessed hew was fishing maggot, so I started feeding maggot further down past the bale. I hooked a big / fouled carp which went off down the far bank and then snagged me and a new hooklength was needed. Then the next and by far the worst storm came!!!

The wind came from nowhere, and luckily all my plans came good and my gear was safe, sad to say a lad on the other canal opposite had to run after his shuttle, and then snapped his 2 week old pole in a couple of places. Nev then lost his maggots when his bait boxes blew over, and that it turned out was handy for me. I think I managed 3 fish on my top set+1 line in the storm, but was glad when it finally passed as my hands were numb from the cold rain and wind. It was though impossible to fish across again which was gutting as there were now carp topping. Thankfully my perseverance feeding maggots in close got me a few more F1 and small carp on the two close lines, with my very last carp being landed after the whistle. I was happy to pack up as I was shaking from the cold!

I had no idea what I had caught and had split my fish over two nets to give them some room! Nev reckoned he had 50lb and word had it that was likely to win the match. The scales weighed the first 2 canals and 44lb was top, a few pegs to my left 36lb was weighed and then it was my turn. My first net went 27lb, and my second 26lb 8oz (that was a good split lol) and I'd gone into the lead with 53lb 8oz. Neville's nets looked very similar, but I was dead chuffed when Keith shouted 52lb 8oz and with only one angler left to weigh I knew I'd won. The last cast carp had done it!

Well that was a nice day, a battle against the elements and a battle against one of the best anglers at Hill View. It is safe to say that I was on more fish than Nev as I was feeling my way into the peg not having fished the canals for a long time. But we all need that bit of luck if we are to compete with the locals now and again. What a nice days fishing, if you discount the weather lol!

Finally get well soon to matey Mike Nicholls who is suffering with pneumonia, not good weather to be out with that.
Posted by Tim Ford at 19:52