I made the decision just last Monday to fish this series and also Tony Rixon's Float Only Series. It meant I could put some dates in my diary and also keep Glenn company as he was already long booked in for both. Another manic weekend really with little time for prep, I had to take the eldest back to Uni in Plymouth on Saturday and as you can imagine time was limited but I managed to knock up a couple of deep rigs and change an elastic which was perished and filled my bait bag with 4mm and 6mm pellets and took some meat and paste out of the freezer.

Glenn was driving today and we stopped off in Hilltops cafe where quite a few other anglers had taken a munch, including fellow blogger (with some words spelt correctly) Dom O'Sullivan who was off to Summerhayes. Clint Wojtila came in wearing a T shirt and shorts and I questioned his sanity as the weather forecast was for heavy cloud and 11C max, but he said he was used to the cold!

We got to the venue in good time and after dipping the nets and paying entry fees and pools I was soon pushing a loaded Preston shuttle up to peg 34 before waiting for the draw. The wind was North Easterly and blowing across to the car park bank, meaning a draw opposite would make for a pleasant day. When I stuck my mit in the draw tin I had about 3 tickets stuck together, so I shook them and kept the one I had the most grip of, it was peg 33, not far from where I dropped my gear. Sadly it meant I would be facing the cold wind, but I did have an empty peg either side and that meant I had a corner peg which I thought might be a good thing on the day. I drew peg 32 last year and took over 200lb from the margin and that was a positive help today. Neighbours for today were Steve Seagar on peg 2, Clayton Hudson on 31. Also in my section were carp slayers Martin McMahon on 4 and Tony Rixon on 30, the Gimp on 3 would prevent me from a last in section I thought as hed fish for silvers.

On the all in I fed meat on one long line, and 4mm pellet on the other, I fed both margins with 6mm pellet. I was already wearing all my clothing to keep me warm from the wind, but I warmed my hands up by putting them in the lake as the water was much warmer than the air temp. I started on my long lines, but there was nothing happening, no liners, no nothing. After about 35 mins I had a 3oz roach on 8mm meat, and on the hour I had an 8oz roach, despite all efforts this was the sum total of my meat fish today!!! An early try in the margins was fruitless with just the motherless minnows playing .

Two hours in and I had added 2 small skimmers to my lonely roach, these fell to banded 6mm pellet over the 4mms. Not long after this a decent bite on the pellet and I had hooked a carp, it was only 3lb but at least a carp! About halfway through I was scratching my head, our end of the lake was poor with Tony and Martin best with 4 carp, Steve had 1 and Clayton on the whitebait. I decided it was a good time to go for a toilet break. Returning it was obvious the anglers from peg 10 to 15 all had been catching and this was best area by far.

Returning to the peg Glenn opposite me on 7 had taken 2 carp and a few small skimmers but with 2 1/2 hours to go he started to get a few bites. I carried on throwing 6mms in my margin in the vain hope the carp would finally move in there, if there were indeed any carp in the area! With just over 2 hours to go another look in the left hand margin with 6mm banded pellet and the float buried and loads of elastic came out, carp on! Fish landed I fed a few more pellets and dropped the rig in again, it danced around bit as if plagued by minnows and then shot under again and it was another carp. The margin looked like this in my left, I caught next to the green stick ups before the tree where it was about 2 1/2 ft deep. 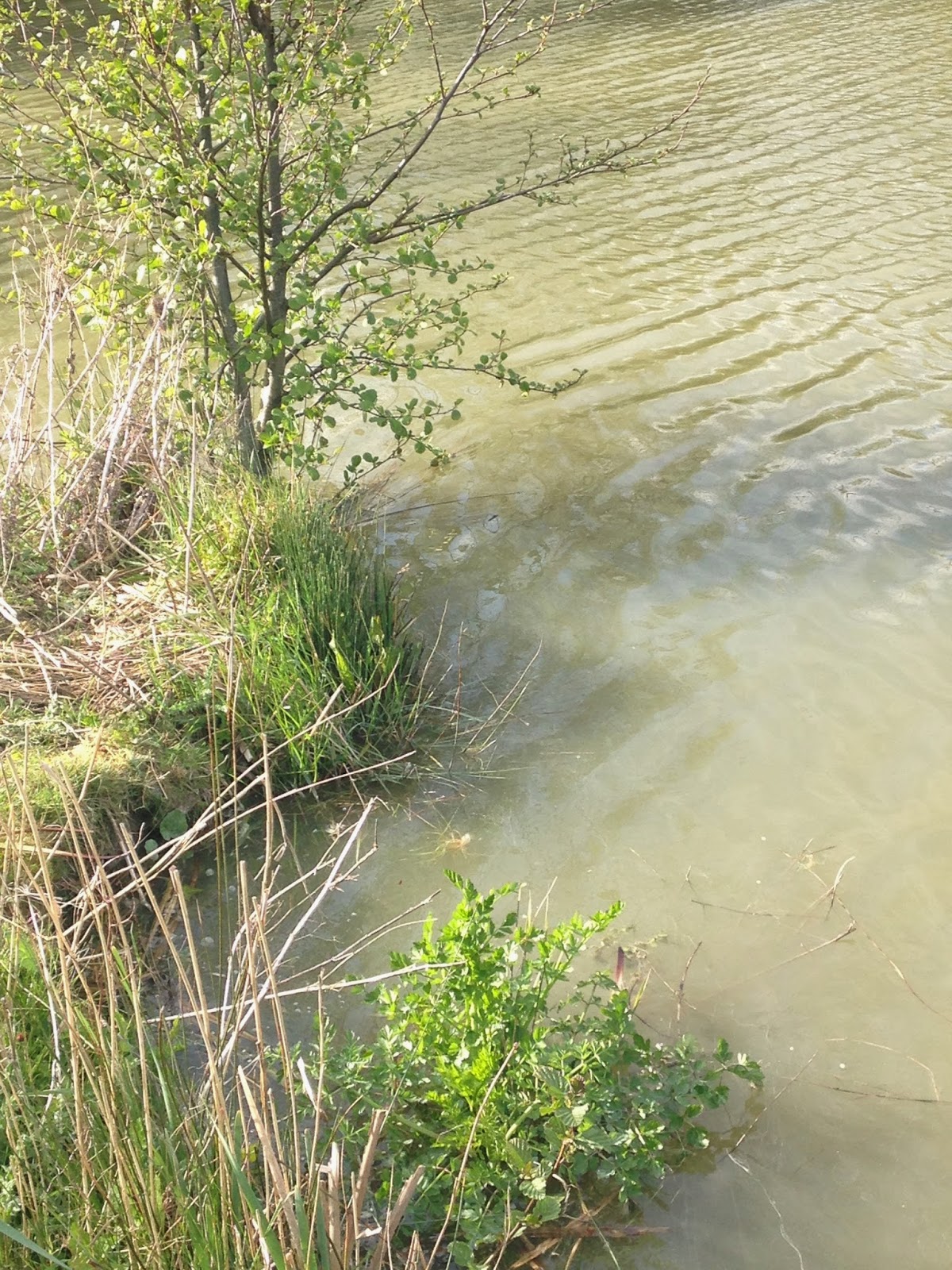 For the next hour I put carp in the net regularly, but then margin then began to slow as I feared it might. I went over to the right margin which had showed no signs of life and the float just sat there and did not move, just as I was about to give up I had a carp from here. Back in the left hand margin and although slow there were carp to be had and they were decent fish around 6 to 7lb. I was clawing my way back on the guys who'd caught well and I didn't feel I could waste to much time resting the left margin as I needed to motor. I took another 2 carp from the right margin and a more from the left including in the last 10 mins a 3lb and 5lb fish. What a contrast, 4 hours of tedium followed by 2 hours of bagging, I thought I had 90lb. In all I had fed just shy of 2 pints of 6mm pellets into the margins. Glenn opposite had also caught well late although he said nothing like me, and generally most people caught carp late on.

Tony started the weighing in on his peg and he had 76lb, Clayton struggled for 20lb+, and then my nets went a total of 96lb 5oz. I must have had 90lb of that in the last two hours. My weight was enough to win the section but Tony said he didn't know if it would make the frame. As it turned out I clung on to 2nd overall with Mike Nicholls winning the match with 117lb from I think peg 15, well done! Those last two carp were crucial as I beat Paul Elms by about 3lb and Bela Bakos had 88lb. Just for a change I have a catch shot of my ugly mug and a few of my fish. 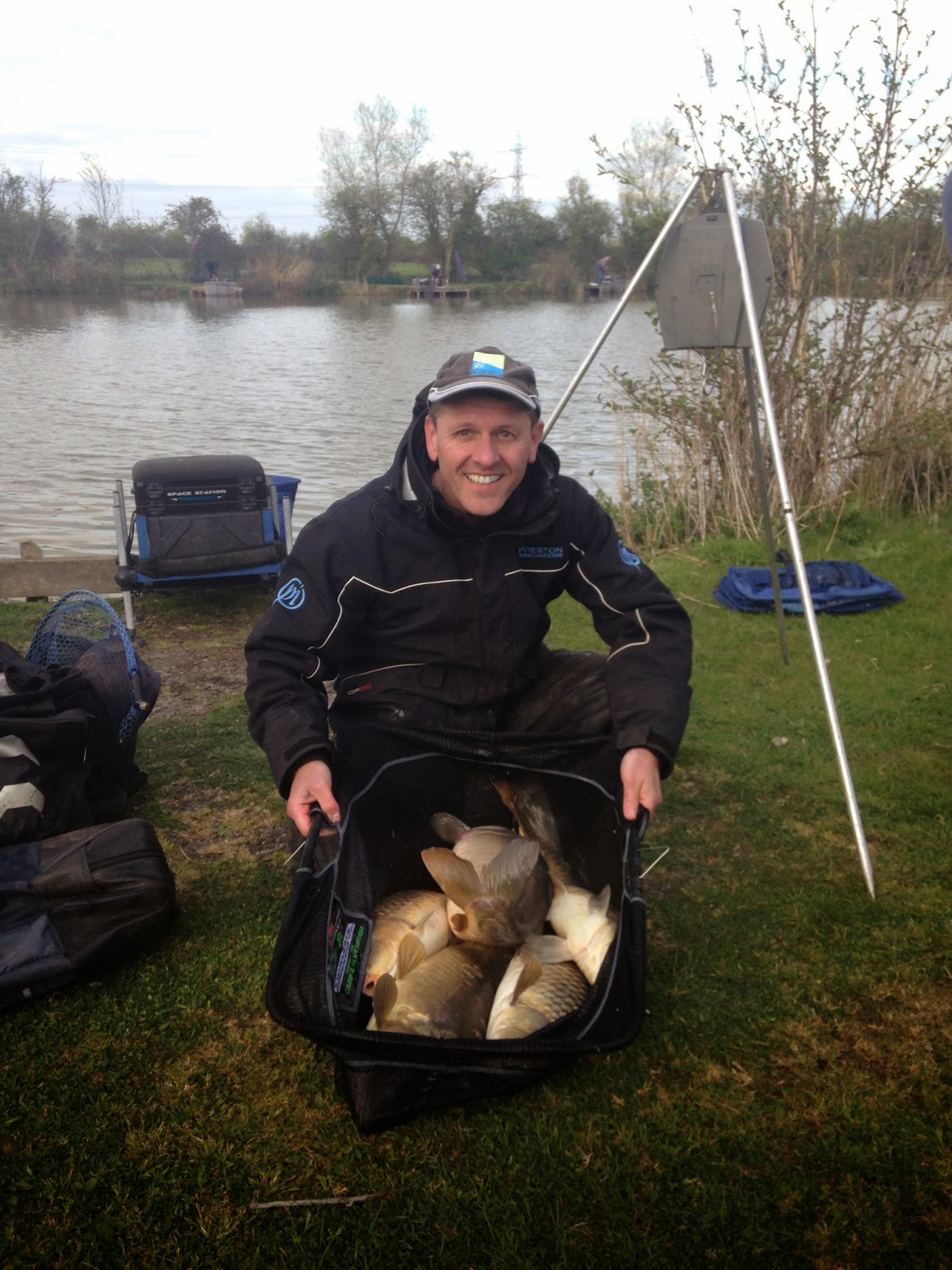 A good match in the end, but I could have done something else for four hours lol! Full results will be on Tony / Mikes / Ken's / Chris's blogs lol!
Posted by Tim Ford at 22:02