Float Only Series Round 2 Landsend Fishery

I woke up Sunday morning feeling very tired with 3 bad night's sleep on the trot, I actually ached where I think I'm not getting enough down time. As I was loading the car I had to go back and unlock the shed twice as I left things in there, to be honest I felt like a snail without shell, sluggish!

Drove down on my own as Glenn was staying at Viaduct for the annual fishing holiday, I'm joining the lads Monday night as I have to go in to work on Monday. I got to the fishery before 9am (the draw was 9:30) but Glenn and co were already there, they were complaining that Mike Nicholls had woke them up early! I had a quick walk around Speci lake which looked lifeless, and then onto match where many more carp were showing themselves and I'd be happy with a peg on here! I got into the draw queue about half way along and dipped in the white bucket, staring back at me was 27 on Speci Lake. I said to Tony is that another bad peg I've drawn, and he replied yes that's why its got 2 empty pegs either side. Oh pox! However, I did get a few good comments which gave me hope, and my section was at this end of the lake and went like this; 38 Chris Davis, 40 Paul Elmes, 25 Mike Nicholls, me 27 and Chris Fox 25. Three bloggers all in a row, and I said to Chris Fox he was in trouble as I was drawing poo!

Mike below setting up, he came up to see me before the match started and nearly fell over on my pole. I think he was still suffering from the beer the night before! 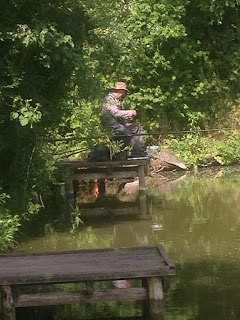 My view, the water looks an odd colour and you can see the far bank vegetation. 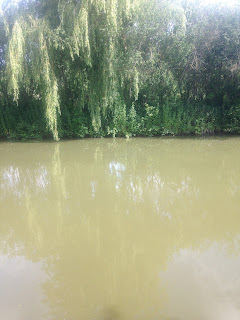 This peg is very wide, and even with my box as far forward on the pallet as possible I couldn't get tight into the island with 16m. Although there was so much foliage over there it would be nigh on impossible to push the pole over there. I set up a dobbing / swinging rig which I would use to get close in across, this had 0.16 to 16 PR36. A slapping rig with the same gear, a meat rig for 5m (only gave me 4 roach), and a 4x10 Durafloat for the pallet by peg 26, which I never had a bite on. Before the match started there were a few carp around, although they were hard to spot in amongst all the foliage that was on the water, this had appeared after Foxy had cleared his margins and it was a pain in the arse!

On the all in I had a go with the stalker rig, but all I managed to do was spook 3 carp, and nobody seemed to have any success with this on our lake, but I did fluke an F1. I was feeding 6mm pellets across with a catty and wanted to leave this to get going, but after 35 mins of no more than a couple of roach and watching Foxy fouling 3 or 4 carp across I had to follow. I didn't go tight in to begin with and I soon caught another F1 on a hard pellet, and on the hour I had my first carp out. At this early stage Chris Davis was on a few carp, Foxy had got 1 fouler in and that was it.  The Tourettes had set in with both Chris's as foulers, rigs and top sets were all lost or broke, lol!

My second hour gave me another carp across fairly soon and, and I did spook the odd fish but never fouled any. That was my lot for the second hour and it was obvious this lake was fishing poorly, Mike was on the silvers in close but did get 1 carp. My third hour saw one more carp but then it was even worse and I was into a deadly zone of no bites and no indications, I had to do something. I got off my box and got out some casters, a new rig which had a 0.3g PB Inter 4 with 0.128 exceed to a 16 PR412, my spring silvers rig! I plumbed up and settled on a spot at 14.5m to my left, I potted in some casters and left it for 10 mins. Going out with double caster on I had a couple of small roach and Mike commented I was going to long for them. I then started catching 6oz skimmers slowly but steadily, and when ever I caught a small roach I would pot in a decent amount of casters again. The fishing was not bad for a couple of hours and I did get another F1 and 2 skimmers which were over 1lb. However, the carp started to feed around the lake and when I lost on my caster rig I had to try and catch one as I was slipping down the section. The margin was a waste but going across again I hooked 3 more carp landing 2 before the match ended.

Mike on 25 had 6 carp on paste to the bottom bank and some silvers so it would be close between us. Foxy on 29 had decided he wasn't going to hang around to get last in section and chucked back, he never even said bye! My section was won by Chris Davis with 62lb, next to him Paul Elmes finished strongly and came 2nd with 56lb. Mike then weighed 43lb and I wasn't sure I had that, but... my 5 carp went 31lb, and my silvers 16lb and so my 47lb was middle of the road, no coin today then!

Getting back to the car park it seemed that lake 3 had also fished very hard in places, but match lake had fished much more consistently and produced the top two with Steve Tucker first on peg 1 with 125lb, and Tony Rixon 2nd on peg 18 with 123lb.  Silvers winner was Gordon Cannings with just 22lb from peg 31, and much to my surprise I sneaked in 2nd in the silvers and did get some coin!

That's all for tonight, my arms and shoulders are aching from fishing long all day. A day of rest tomorrow before three matches in three days. I'll do my blog updates when I come back from Viaduct, hopefully with a few good catches and hangovers to write up about!
Posted by Tim Ford at 21:30