Another trip to Viaduct Fishery or as some people call it "ton up city." Glenn was back from sunning himself in Spain and played the part of taxi driver today, a brekky in Canards Well and arrived at the Fishery in good time. Carp had started spawning on Campbell and Carey the day before and were still going at it when we arrived. No signs on Lodge of Spawning and in fact it looked flat and very quiet, I made no secret of the fact I was sure I could not draw on here for the third round in a row! In the draw queue and I was alongside Leon Hubbard, he surprised me by drawing his peg and offering it to me, but I declined quite quickly as I have always liked to be in charge of my destiny. Leon drew peg 98 on Carey which is usually OK and a very good peg in the section. I then nearly choked when out I pulled peg 71 on Lodge, holy shite! This peg has been last in section on the last two rounds, with last time Dan White struggling on it.

I dragged my kit to the peg and at least I had some decent company with Warren Bates on 69, Phil "Fabio" Harding on peg 70, Martin Preston was on corner peg 73, and on Carey 102 was Trev Senior and on 103 Nicky Ewers who was watching the carp spawn in his margin. I found out a decent weight of skimmers had come off my peg in the UK champs this week, and I decided with my league already over and no chance of coin in the section I was going to try to have a nice day on the pole with skimmers (even though there is no silvers pool). I set up a stalker rig, a pellet rig for deep at 14.5m, both had 0.16 to 16 PR 36, a meat rig for 5m and 4x10 durafloat for the margin on my right by the brambles.

Fabio on the next peg kept us entertained before the match by signing "Strangers in the night", although he only seemed to know a few lines and Adrian Jeffery let him know what he thought of it, lol! 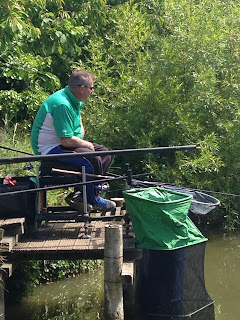 This is the appealing view I had on peg 71, sunny flat and not a carp in sight! 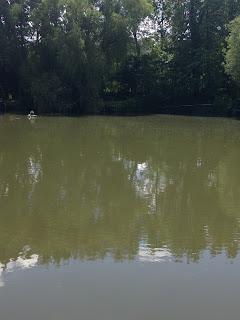 The match didn't start till a few minutes after 11 as nobody from the shop called all in, eventually we all said all in. As I looked in front I saw a carp about 11m out near the surface and so I went out with the stalker rig, I obviously swung it in right as the carp grabbed the 8mm pellet and I was soon playing a decent fish which I landed. Sadly no other carp were visible (at least not in reach) and so I cupped some 6mm pellets in at 14.5m, I shipped out with a 6mm in the band and within a few minutes a proper bite resulted in a near 12lb fish. A good start and I was the only person with a carp on this side of the rope. As ever the indications just stopped and any signs of fish were just the very odd carp that caused a line bite and bow waved away. Glenn was on 62 and he had started well with a couple of big carp and skimmers.

It was probably at least another hour before I caught another carp, I'd tried fishing shallow which did not bring any indication, so I spread the shot on my deep rig and 1 carp grabbed the bait probably a foot off bottom. An hour later I took another carp on this line but on a piece of meat. Nearly half way through and my 4 carp was as good as anyone else I could see, with Fabio on 1 skimmer, and Martin a few silvers. My peg then went from bad to worse, and the only bites or indications I got (until the last 20 mins) were from small silvers and a near 3lb skimmer on meat at 5m, The banter kept us all going, with Glenn snapping a top set, Nick Ewers doing the same behind me although at least he was catching carp in his margin! I'd tried my margin a few times without success, I'd been throwing 6mm pellet there instead of meat as meat seemed not to be working, and with 20 mins to go a look back in there and the float was washed around by a carp and I missed a bite. Dropped it back in and the float buried faster than Lewis Hamilton and this time the elastic came out when I struck. This was another near double figure fish. Back in again and after a few minutes a repeat performance but sadly the carp came up and the line caught a trailing bramble and snapped above the bulk. I got out another rig and was back in the edge with about a 6 mins to go, and with about a minute to go I had landed another carp. I went back in but there was not enough time to get another bite, however Martin Preston did get one and that put us on 6 carp each.

Packing away I was certainly glad that I had brought the sun cream with me today, I thought I might have a chance to get 2nd in the section because it had fished hard, but it turned out that KEv Molton on the monk had 71lb, the lad on 66 had 66lb and Ian Exhall on 68 had a 130lb, Warren had 17lb, Fabio 20lb, and my net went 59lb 3oz. Finally Martin weighed 53lb, so I had beaten 3 and been 1 or 2 fish off second in section. To be honest I was happy with how I fished today, and I nearly pulled a rabbit out of the hat, losing only the 1 fish was certainly a lot different to anglers on other lakes!

I managed to not break anything today (yay) and got a bit of a suntan. Nick Ewers managed 140lb from his margin, he never really fished anywhere else. As expected Campbell and parts of Carey fish really well, with Craig Edmunds winning on peg 88 with 208lb, although the lad on 90 would have beat him but he had 86lb in one net and lost all the weight! Steve Tucker was second with 201lb from peg 112 on Campbell. As far as the league goes it looks like Giles Cochrane is favourite to win with Trigger a clear 2nd place. Glenn won his section today and is lying in joint 3rd place so all to play for. Sadly my 3 pegs on Lodge have done for me, but we can't draw good pegs all the time, surely I'll get a decent peg on the last round?

Landsend float only next week.
Posted by Tim Ford at 21:35