Today's match was the last of the 4 round short pole series. Sadly for myself after a section win in round 1 I was unable to fish the next 2 rounds and as only one stand in allowed I got a zero point in round 3 meaning the league was over for me. Thanks though to Aaron Britnell who did stand in for me, Up The Gas Aaron!

I was well overdue giving a lift to Glenn, and so even though I had thought of fishing the river today I took my turn driving to Chilton Trinity. Glenn had an outside chance of getting in the top 4 of the league if he won his section and a couple of results went his way. I was just going for the best I could on the day, and as such we both went armed with just pellets and paste! After a brekkie in the grumpy old gits cafe (Hilltops) I was set up nicely for the day. I was quite a long way back in the draw queue again today, and even before I got in the cabin Chris Fox came storming out with a face like thunder. Glenn shouted back he'd drawn 25 and was in the same section as Chris, not good then. I then went and pulled peg 24 so I was going to spend all day next to Glenn the paste master, and on peg 23 was the one and only Tony Rixon, good neighbours today then. Apparently this has not been a good section all series, but it is a fair one as there are no corners or gaps.

As I started to assemble my gear on the grass behind the wooden planks I was thinking how was I going to beat Glenn fishing paste, I'd really not done well on it this year and Glenn has just emptied everywhere on it. However, I wouldn't feed it in the same way or use the same paste mix as him so as long as approaches differed slightly there was a glimmer of hope. Rigs today were just three; for the far line (6m) the paste rig (a big H 4x12) with 0.19 to size 10 Drennan Carp Feeder, a 4x16 pellet rig, and for the margins a 4x10 Dura 10 for banded pellet. Nice and easy and I was well ready for the start of the match putting in a pot of 6mm pellets in at 6m, and some 8mm pellets in either margin, that was it. Starting on the paste rig and there was a fizz straight away, first drop in and I soon missed a bite or a liner. Back out again and after a 5 min wait the float buried and I struck but didn't connect with anything until about 2 feet below the surface, bugger must be fouled then! Off this fish went and I hung on, and whilst it pulled really hard it didn't go stupid. After a few minutes the fish boiled near the surface and from that boil I could tell it was a good fish, but I still assumed fouled. After a short time I got the carp in closer and I could then see it was hooked in the mouth (how did it swim 5 feet up from the bottom with my paste in its gob?) and a biggy. Got it in the net and I guessed it had to be close to 15lb which is about a good a start as I could get! Here's a pic of the beast, I struggled to hold it up, and that's Glenn's finger in the shot! 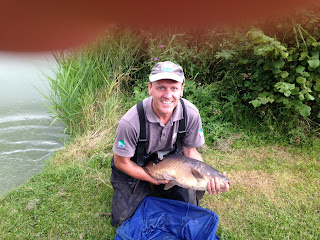 Back in on the paste and it all went a bit quiet before I had a 12oz skimmer, so I re fed some more 6mm pellet. About 20 mins gone and I hooked another carp, this fish fought hard too but it turned out to be a white ghostie and they always go mad, it was about 6lb. By the end of the first hour I'd added a 12oz hybrid and that was it. Glenn was really struggling and had only 1 carp, Tony was fishing for silvers and only had a couple of skimmers. At this stage Bela Bakos on 26 was on 3 carp and doing beat in our section. The next hour was tough and all I managed was a small skimmer and believe it or not an eel getting on for 2lb!

The next 2 hours were dross and Glenn soon over took me and he and Bela were in front, Tony had one carp and was struggling for anything. Across from me Craig Edmunds was catching steadily and stood out as the only person catching regularly. I tried my margins on and off all day and I never had one bite from them, neither did the pellet rig work at 6m, it was paste or nothing. The last 2 hours Glenn and myself were able to draw the odd fish in over our past swims (getting the odd fizz) but catching them was not easy, whenever I did catch a carp Glenn would seem to get one soon after, and he kept being 1 or 2 carp in front. Coming up to the last 15 mins Glenn had another carp and he now had 8 to my 6, but with 3 or 4 mins to go I had a fizz approach my float like an otter and as it arrived the float shot under and I was in. Tony shouted take my time, I wasn't rushing that's for sure, and I had too as this fish fought like a tiger even though it was only about 5lb, I landed it a few minutes after the whistle, would it be crucial! I looked on my clicker, I had  recorded 50lb, and I thought I had 6lb of silvers, Glenn was saying he had 40lb.

The scales arrived and Tony weighed in 20lb, I think he might have had one or two choice comments about his fish being lonely lol (read his blog for how he caught!). My silvers weighed 7lb+ and my 7 carp 49Lb+, for once I got my clicker number right! 56lb 10oz was my total, and the scales went on to Glenn, he had only 1 skimmer to go with his carp, but he had more than he thought, well the fish were big. Luckily for me they were not quite big enough and he had 51lb+, so my last fish probably was crucial. Beating the paste master at his own game and Tony next door made my day, and the icing on the cake was I was top weight on my bank and so won the section.

Opposite Trig won convincingly with 135lb, an awesome performance, 2nd was Kev Moulton from I think peg 17 with 81lb, and 4rd was Tom Magnall from peg 7 with 65lb, so I guess I was first out of the money in 4th, hmmm think that happened last week lol! Paul Faires and Ken Rayner were 1st and 2nd in the silvers respectively.

Trig managed to clear up on virtually all the money, he won the league, the knockout, and the heaviest weigh over the series, there is simply no stopping him, congratulations. Sadly, me knocking Glenn down to 2nd in the section meant he was first out of the money in the league, I was gutted about that but we did have a great peg to peg battle and some good banter was had with everyone throughout the day.

Next week a complete change, it is back to the Rivers and the Avon at Newbridge. I hope we get some rain this week, otherwise I could be looking at a difficult match, but whatever I will be looking forward to it.
Posted by Tim Ford at 21:36