Well I didn't pick the best of week's to have a holiday in the UK, got a bit wet at West Bay during the week lol! Got back home Saturday and the first thing I needed to do was get all my gear out (which had been put away wet last Sunday) and clean and dry it off. Thankfully the weather was good and after a while everything was washed down and left out to dry. 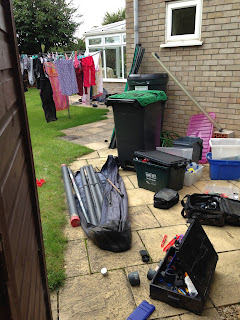 I spent the morning making some rigs up and tying hook lengths and was happy that I had everything ready for Viaduct the following day. Glenn was doing the honours again on the driving front, primarily because his car can take the extra load of made up rods that Glenn takes. He picked me up at 7:30 and we headed off for breakfast at the Highwayman pub which is next to Canards Well. The breakfast was well pricey at £8 but included fruit juice and cereal (not that I had that), but when the cooked brekky turned up it was well cooked but low on contents. Not worth it in my opinion.

Today's match was on Campbell and Carey, and I had no thoughts about where to draw or not, I just got into the queue. Craig Edmunds was winning the league with 4 perfect section wins, Tony Rixon, Shaun Townsend, Steve Tucker and myself were all 1 point behind Trig, and I was 4th on weight. I therefore need a section win today to keep myself in the money overall, and hope the others dipped out.  I was happy enough when I pulled out peg 96 on Carey. I've not been on Carey for a long time, and I knew this was a good peg although I'd rather be chucking the lead out on it! Glenn was away to 114 and off we went.

Got to the peg and 95 is left empty, Glen Calvert (we seem to draw next to each other a lot) was on 96, 90 wasn't drawn, dunno the lad on 88 and Mike West was on 86. Glen would be dangerous having all of the end bank to himself, and I could not talk him into fishing for silvers! I had asked around for advice, and World Champion swimmer James Guy was helpful as he had been on the peg the day before. I decided on a paste approach at 14m, a waggler at depth for further out, a meat rig at 6m, and a margin rig to fish next to pallet 95 which other than a 1lb tench was no use. All rigs were on 0.18 Exceed or 0.17 Powerline for obvious reasons! On my left was Neil Mercer, and I told him he had to me a favour as in his section were Shaun, Tony and Tucks! That was good news for me and if I could win my section I would beat at least two of them.

On the all in I fed a pot of 6mm pellets on the paste line, fed a couple of cattys of 8mm pellets further out and then saw that on peg 98 Paul Elmes was already playing a carp caught on the short pole. I started on the paste and soon hooked and lost a fouler, but next drop in I was hooked up to a decent fish and landed it, must have been near 12lb. Fifteen minutes later and I was in again and this time I thought the carp was around 10lb, not a bad start after 30 minutes! Then the fun began...... I fouled 2 carp on the pole and after 90 minutes I had only added one more smaller carp. I did have a chuckle at Neil who managed to snap a top set in 5 places, but still managed to land the carp! 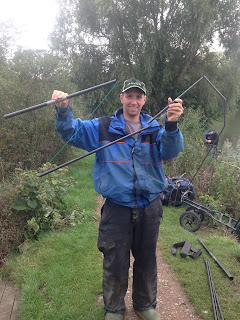 A try on the waggler was just as frustrating with a few missed "bites" and two foulers lost. Back in on the paste and although fish would show themselves by fizzing I either missed bites or fouled the odd fish. I did manage another carp on the pole but after 3 hours my 4 carp was winning my section, but Neil was beating me next door. Glen on 94 then had 4 carp in a shot time and I was really struggling to get my head round how to catch these lumps. Another go on the waggler was even more frustrating with another 3 fish pulled out of, one of them even hooked itself with the handle spinning backwards but was still fouled grrrrr!!! After this the wag line died and I decided to give it up and concentrate on the pole lines.

Early looks in the margin and meat line were fruitless, and Neil was way ahead of me, then I hit a couple of carp on the paste and it seemed to me the fish had moved into my swim from Neil's as his long line dried up. I hooked a fish on the paste with an hour to go which I really had to hang onto, and I knew it was fouled, as I got it nearer I knew it was in the tail and trying to reverse in a double ain't easy! Luckily everything held and a very round fish finally settled in the net. Another fish then snapped the line and somehow the float came off so I had to get another rig. Glen was still my main rival in the section but he had slowed down on the wag and I was sure I was ahead of him. I took another couple of carp in the last hour on the paste, the meat didn't work for me, or should I  say I didn't make it work! I ended the match with 10 carp all on the paste, I had fed about 3 pints of 6mm pellet on this line. Neil thought he had around 15 and it would be very close in his section between him, Shaun and Tony, Tucks had really struggled.

When the scales arrived at my peg Glen was winning my section with 69lb, I knew I had that beat and the scales confirmed it at 106lb, I had got the all important section win. I then followed the scales down as the next section was important, Neil had a good 156lb, and he just beat Shaun by around a 1lb, and Tony got 136lb. What that meant was I was going to beat all of those guys in the league. Of course I was never going to beat commercial fishery expert Craig Edmunds, and he finished his league off in style winning the match from peg 76 with 175lb and winning the league with perfect points, well done legend! Actually Trig should have been 3rd over all on the day but on Campbell Gordon Cannings and Chris Fox both went over in their nets losing weight, in Gordons case 89lb OUCH!!!

Results on the day (as I recalled them)

Well I am well chuffed to come 2nd overall, I certainly had some good draws and the luck went my way today with those 3 anglers in the same section. Picking up £265 on the day was the icing on the cake. Thanks to Tony for running the league.

Next week I am fishing the river Thames, not fished it for ages, might be a struggle!
Posted by Tim Ford at 21:41