I had a call a few weeks back asking if I'd like to fish this 4 man team match for my Thatchers lot, I said yes as I hadn't fished this part of the Thames before and it would be a good experience. It did mean an early start (getting up at 5:45) to get to the Swan Hotel in Radcott for the 7:30 draw, although most of us got there for 8am as James Carty did the draw for us early. James handed me my peg number, it was peg 2 at Radcott, and it turned out I was downstream of the pub on the opposite bank.

Only a short drive into a field, lifted all my gear over a fence and then took a short walk over a bridge and and got to my peg with no fuss. There were no end of good teams and anglers fishing this event, and local knowledge would be hard to beat, but I was told I was on a good roach peg so I hoped for the best. Got out my first rig a 1gm pencil rig and started to plumb up from 4m to find the contours of the river. It was very shallow at 4m and I was disappointed to find the river just slowly deepened off only beginning to flatten up at 13m where it was about 8ft deep. Whilst this may not seem too bad the issue was all the flow was closer to me, so going past 13m would put me into slower flow. It also limited my options for finding other places to feed, or at least I felt it did. The pencil rig had a 22 to 0.08 on it, I also set up a 0.5g float with strung shot to fish hemp with a 20 to 0.08. Lastly for the 13m line a 2gm rig with 18 to 0.09 in case bleak were an issue, A chopped worm rig was also set up to fish at 11m at 2 o'clock a 4 x18 with 0.14 to 14. I did set up a waggler but never used it.

The picture of the river here looks like it has colour in it, it did look clear in close but I think it must have had a lot of suspended solids in it, plus during the day a lot of weed was coming down and lots of boats stirred things up. 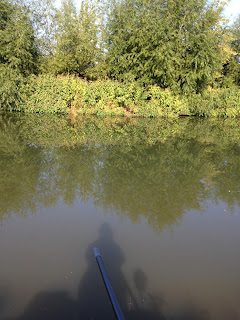 To start the match I cupped in 5 balls of gbait/soil containing some hemp/casters and a few pinkies. I also bait droppered in some worms and casters on my choppy line. Went out on the 1gm rig to start with a caster, but after 5 runs through without a bite it was on with a maggot. I got bites on a maggot but it was from very small dace, 2 little perch and the odd bleak on the drop, after an hour I'd not seen a roach! Dropping in on my choppy with a dendra I had an instant bite and a 2oz perch, 3 more of them before it died so I refed and went back out to 13m. I had been loose feeding this line with hemp and casters, but it was now bleak central and if I did get a bait to the bottom I didn't get a bite very often. I stopped feeding casters and just put hemp in the catty,

The lads either side were struggling too and at this stage roach were not feeding. I'd fed a bit of gbait and maggots at 7m from the start in case I had to fish for bleak, so I dropped in on this with my whip rig and never had a bite. It was crazy my 13m line was alive with little bleak but they would not come in any closer, maybe it was because of the shallower water? Even using my 2gm rig with 3 no8 bulked below would not often beat the bleak. Trying the choppy gave me a couple more small perch and that petered out soon after. In the red hot sunshine it was tough going shipping in and out to 13m catching tiny fish but it was all I could do. A few tries on hemp were fruitless and I don't think anyone caught on it around me. A lot of weed kept coming floating down making trying to get a rig in very hard.

Going into the last couple of hours the bleak went from insane to non existent for 20 mins, odd gudgeon and 1/2 dace and roach were all I caught before the bleak returned. My best spell by far was the last 15 mins when after a run of little roach and bleak on single pinkie I then had three 4oz roach as the match ended. Jamie Cox of Garbolino BMV had wandered up and down a couple of times and we had a good chat and I gave him my casters, I hope he catches more with them than I did!

The scales had to come up from peg 12, and I watched them weigh from Steve Long on peg 5 (he'd struggled for 3lb), there had been some decent weights of bleak below and I was regretting not being able to catch them in close. The lad below me (on a bit of a point) had caught them at 4m and he weighed 6lb 12oz.  My net went more than I though with 5lb 12 1/2oz, then the end peg beat me with 7lb again a lot of bleak on the whip, so I had been beat both sides, by bleak. Bleak fishing is not really a strong point for me, but I am sure if I had caught them feeding on the whip line I could have had another pound of the critters.

Back at the pub it was clear to see that my lot had only done average, in fact My weight was worth 14 points out of 26, Lee Trivett had just under 4lb for 16 points, James Carty 6lb for 13 points, and Martin Barrett 2lb 10oz for 10 points. I didn't stay for the results but it looked like Drennan Oxford had romped it.

Well that's it for me for a couple of weeks now, more family commitments for the next two weekends so no fishing until 26th Sept. I'll have to dig the diary out again!
Posted by Tim Ford at 21:16