Before I get on to this weekend I have to reflect on last week's canal match. The more I think about it the more I think fishing the canal when not in winter is becoming a complete waste of time, this is due to the amount of boats. I look back to matches 20 years ago at Devises when I had 20lb+ weights of bream and carp when I didn't have a pole long enough to reach the far bank! Now with a marina up the piles section with about 1000 boats in it the canal is silted up and most of the greenery washed away. No fun for anglers.

Back to this weekend, I was asked to peg out the Crane and I had to put 15 pegs up there, an easy task and I tried to leave out pegs I wouldn't want to draw, that said I would much rather draw Swineford or the the top end of Jack Whites in the match. Went down town Sat evening with the wife and our good friends Warren and Becky Bates. Suffice to say I had more than enough beer to give me a slight headache Sunday morning....

Draw as per usual was at the Rugby Club in Saltford, a couple of sausage baps and a cuppa made me feel much better. John Harvey did the team draw and he put me up the Crane, git lol! I was on F1 which was the first peg below the high wall, I had 3 pegs between my self and the gantry with Vic Abbott below me, then Kev Boltz, then Mat Challenger. All on his own on the cattle grid was Lee Warden. I have fished the peg before a long time ago, and chub can be caught across but I think it is still to warm for them to feed proper. 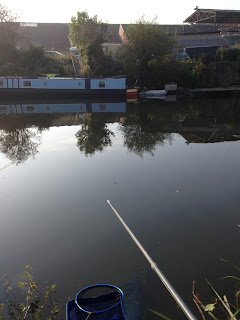 On the all in I chucked 10 balls of gbait with hemp and casters in, and started feeding pouches of maggots downstream and across. I started on the 1gm rig with maggot on the hook and I had 10 small dace in as many drops. After 30 mins bites went iffy and I started to loose feed hemp and casters on the pole line, very soon after this bleak became a pain. pushing 2 no8 droppers together above the hook length made a big difference and I was back in to small dace and the odd small perch or roach. I wasn't getting anything decent but it was sort of what I expected. Things then started to get a bit iffy, less bites and harder to hit them. I picked up the crowquill and further down the peg had the odd bite from 2oz fish and a lovely 6oz dace. Young Tom Moretti was walking and watched me for a bit and said I was catching as well as anybody else.

Two hours in and the pole line was a real struggle, time to put a couple of bait droppers of worm in down the peg. A brief look on the waggler was no good as I couldn't hit a bite from those bloody dace! Although the wind was now a nasty down streamer I cast the crowquill out across the river on the wag line and it was a good move as I got a bite a chuck, though they were hard to hit! I reckon I could get 3 bites a cast and was getting the odd dace and roach, bigger than those on the pole. Time to look on the worm line and I had 3 perch for a pound and then had to refeed and go back on the crowquill. The wind was really bad now and with the fleeting sun it made a nasty light meaning I had to cast to areas of the swim where I could see the float. I was catching steadily but not really bagging.

Another look on the worm and a 1lb perch was followed by a 1oz perch! Feed and rest it again. I tried the wag again without success, the pole line was abandoned and it was crowquill with continuous line mending that was still the best. I think 4oz would have been the biggest fish on the crow, but bankside info told me I was doing OK but Lee on the end peg was winning the section. With less than 10 mins to go though the crowquill tangled badly and I thought I'd sit on the worm till the end of the match. Well that was one of my luckier / better decisions as with 5 mins to go the float started to bob and slowly slipped away, 1,2,3 strike. There was a large knock (as my elastic connector untangled itself lol) and a large amount of elastic came out of the pole as the float plodded around. This fish then swam for the margin which I knew was weedy with cabbages, so I pulled really quite hard, but the fish pulled harder and I thought it was a chub. After a tense minute I got this fish away from the shallow water and back out in front, it was still pulling hard but as it came to surface I saw it was a big perch, and as perch do it swam to the bottom again. After another minute or so this perch of at least 2 1/2lb was in the net, get in. I hooked on another worm but only had 30 seconds before the all out was called, well that was a late bonus!

I was the first person to be weighed in the section and I was very happy to see a weight of 13lb 14oz recorded, Andy Ottoway kindly took this photo of me and my fish. 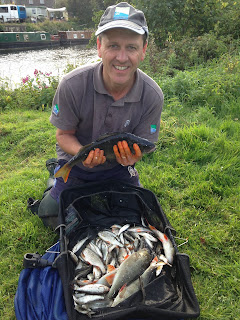 Following the scales down Vic below had 4lb, Kevin 7lb, Mat had 8lb and on the end Lee had a lovely net of roach and some decent perch on the pole to win the section with 15lb 8oz, a good catch. I was happy to be second, I thought it would be hard to beat the end peg, but I had really had a lot of fun today and worked hard for 5 hours.

There were plenty of double figure weights up at Swineford, Crane was harder and bottom end of Jack Whites was dreadful.

My lot Thatchers won the day, beating Bathampton by just a few points. Stand and Deliver Promotions were third.

Next week it is round 2 at Newbridge, we really do need some rain before fishing up there I feel.
Posted by Tim Ford at 20:57