Busy old time again for me, and I was seeing my eldest daughter in Plymouth Friday / Saturday and had to ask Glenn Bailey to peg out the Crane for me. I mixed my gbait Saturday evening and hoped I had everything in the box / bag as was required!

Cold start to Sunday morning, plenty of frost on the ground and on the car but not enough to worry the fish I thought. Early draw today to ensure we could get to our pegs at Swineford before the road was closed for the marathon. Not that I was worried about that as I doubted I would draw up there! Welsh drawbag John Harvey drew for the team again and put himself on the steps at Jack Whites, nice. I needn't have bothered to look at the sheet really as I knew I'd be up the Crane and I was, bang in the middle. Not that it is a bad area of course, it is just I would like the opportunity to see a bit of the other parts of the river. John Harvey followed me to the Marina as he didn't know the way, I did my best to lose him / give wrong signals but he stuck to the back of my car like shit lol!

Arriving I was surprised to see fire engines, boats and an animal rescue vehicle, word had it a cow had fallen in the river down at Jackies, Word was right, and bad luck for Dean Harvey as it was in his peg, he decided to move upstream which was the worst thing he could do as put himself on the worst snagpit I know and he doomed himself to last in section. Apparently a dozen plus firefighters managed to haul the cow out. Anyway back to my lot and a nice steady walk and over 1 gate, end peg in my section was 1 below the soapworks bay which had Jerry Pocock on it, he wasn't happy with it. Two above the wader peg was Rich Lacey and then I was the last peg in that field, so plenty of room. Two more pegs above me with Paul Purchase the first peg in the Long Ashtip, that's one of my favourite pegs and I thought he'd be hard to beat. Got myself set up with a feeder rod, 12BB crowquill, my 1gm pencil, 2gm and 1.5g for chopped worm at 7m.  My main line was at 13m and the only issue the peg got shallower as I went downstream, the further downstream the less the change, so I balled it down stream with 12 big uns with caster, hemp and worm in. I started today on the 2gm rig as I could see there were a few small dace about, I put a caster on the 18 hook and shipped out as the gbait balls fizzed and the float buried and a small roach obliged. A small dace next cast, and a 3oz roach on the third cast just made it to the net as a pike made three attempts to eat it. My first 90 mins was pretty much plain sailing with a bite every cast on the 2gm rig, it was a mixture of roach, small dace and small perch, and a few lost to pike.

The peg went a little iffy which I put down to the pike, and I tried the crowquill down the peg, I took a few but it wasn't right and the wind was nasty. Time to feed some chopped worm and caster at 7m. Back out on the pole and the 1gm rig took a few net roach before Mr Pike took one of them and I was snapped again. It was about 2 hours in so I decided to drop the feeder with a worm on over the balls in case a skimmer was feeling hungry, whilst I tied on another hook length. Sadly this was to be a big mistake..... When I picked up the feeder it was snagged and I had to pull hard for a break, though it seemed I moved the snag a little. Back out on the pole and it was now much more tricky with just odd small fish, time to try the worm line. I like to fish with a long line below the bulk to let to perch watch the worm fall, and as I held the float back the worm could have hardly touched bottom as the float dipped and 2oz perch was swung in. Next chuck it was a 4oz perch, then a longer wait for a bite but this one fought back, it was a decent perch of over a pound. A couple more small ones then a refeed and time to rest it. Then I saw a spinner land at the bottom of the peg, I shouted out to whoever it was to eff off, and about 6 or 7 Eastern Europeans descended upon me. I asked them if they had an Amalgamation licence, they said they did, "Well if you have one look at it it tells you there is a match on!" They hung around and I was a little intimated by their silent staring. Eventually one of them asked where he could fish (I did consider saying Poland) and I told him politely the pegs that were free and off they went. Turned out Nathaniel Johnson also had a bit of trouble with them.

Back on the pole and a run of roach right on top and even above the balls, but as is the way with roach they soon wised up. Try the crowquill again and this was it, the float was going under every chuck, then I hit a snag and lost the hook length. A quick try on the pole but it was not as good, and then I snagged that rig and lost the hook! Back on the crowquill and a few more roach and then the snag again, what ever it was it was nasty and I lost the bulk this time. Back on the 1gm rig and a couple of fish then the snag.... I now had no hook / bashed up rigs on everything bar the worm rig. This was doing my head in as clearly there were roach in the peg.  The last 45 mins of the match I spent on the worm at 7m, I could get a perch of around 1 to 2oz every drop in, but I just thought I was missing on better roach and the weight builders I needed.

When the all out was called my tackle looked like a disaster zone thanks to pike and the snag. A quick look at my fish and I thought I had double figures. Paul above me said he had doubles as well. It didn't take too long for the scales to arrive, Jerry had 5lb+, and Rich Lacey had a day to forget as he struggled and found a hole in his net and only had 3lb (well he emptied it last week lol). Me next and it was 13lb 2oz which seems to be my average weight at the moment. Paul dicked me off the my fave peg with 15lb and there was an 8lb above him, so for the third w/l match on the trot it was 2nd in the section for me. Frustrating this time as I know without the snag 15lb was definitely on the cards, hey ho.

It turned out the river fished well again as lots of small fish fed, but they seem to be keeping the better fish off the feed. Winner today (and he moaned about the peg) was Shaun Townsend with 21lb of roach, dace and perch from the high wall up the Crane. 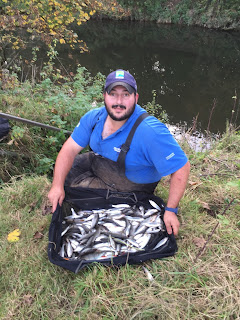 Thatchers had a great day with 36 out of 40 points and won the day, Bathampton were 2nd and so half way through the league Thatchers have a 3 point lead over Bathampton.

I've decided not to fish the next round due to foreign travel before and after, and I just won't have the time to sort out all my rigs and stuff. Gutted but better to give one of the other lads the place and be fully prepared.
Posted by Tim Ford at 20:58