Bela Bakos asked me if I would stand in and fish for his team, and as I had nothing planned for Sunday I agreed. I was working away in Munich for a few days and then spent a great deal of Saturday painting bedrooms, so not really much time for preparation. Actually all I did was to make sure I had some sensible floats, barbless hooks and appropriate elastics in some top sets. I was in the section which comprised 2 pegs on middle, a dozen pegs on match and 5 pegs on spring, so had to take a fair bit of kit to cover many options.

I set off early after giving the wife her Valentines gifts, I daren't forget that when spending the day fishing lol! A nice run down, a breakfast bap and then find Bela at the fishery who told me I was on peg 37 on middle lake. This peg is very good for silvers normally and I was happy to fish for them all day. Glancing at the last two matches results first match no silvers came of it but Mikey Williams had 26lb last round which comprised a lot of perch.

Got to the peg to find fellow Bristolian Alan Oram on peg 38, Alan would be fishing for carp on there for sure. I was happy that the cold North Easterly wind was blowing from behind and my left, meaning I would be able to present rigs well. A 4AAA insert wag was the first set up, with a 18 PR434 to 0.11, I'd fish this out about 20m+ loose feeding casters. Two long pole rigs a 0.2g Inter 4 and a .3g inter 4, both with 18 PR412  to .10 to start. Another 0.2g inter 4 with 16 PR412 to .12 for fishing next to the willow tree for perch. You can just about see the tree in the picture, sun in my face and the wind made for very bad visibility. 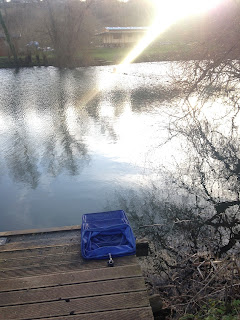 Behind me on match lake peg 40 was Steve Denmead, we both got our poles and rollers in a position to not annoy each other, although Steve found my stink bag made the best roller, lol.  The match started at 10:30 and I fed two long pole lines at 14.5m one straight in front and one off to the right past the tree, both were fed with gbait containing pinkie and caster. I then threw some casters at the willow and then picked up the waggler. Firing a dozen casters out regularly to start and feel my way in, although opposite me was Colin Dyer who was pleasure fishing and also fishing the wag so I had kept an eye on him. Colin wasn't catching much and when he did it was small roach. I spent 45 minutes on the waggler and had a few roach on red maggot but nothing of any quality, and then I couldn't get a bite. I had an early look on my long pole lines, I had nothing, not a bite on any bait. Back on the waggler and not a bite on red maggot so I tried a caster on the hook and this improved things. I took a few roach around the 4oz mark and a 8oz perch, but as soon as things looked up bites stopped.

Earlier than planned I looked again the willow with double caster on the hook. I had this rig set up with 5 no10 stotz well spread out as I think perch like to watch a bait falling through the water, Well I guess the theory worked as first drop in the float buried as it settled. I struck and immediately pulled hard to try to get the fish out from the tree, the double no 5 elastic did the job and a 12oz perch popped up.  Next drop in and nothing on the drop, but after a few minutes a definite movement on the float was soon followed by a nice slow bite, another perch of similar size was landed. Third chuck and a 8oz perch obliged, but then it was dead. The water in this lake was very cold and very clear and I guess the latter meant the fish were backing off.

I picked the wag up expecting to get another run of fish but I never had a bite, hmmm. Halfway through and I was really not going anywhere and had not seen a skimmer. Alan had a few carp on the lead and most people on match lake were doing OK. I wasn't going to give up on the skimmers showing up so persevered. The long pole swims were still dead, even so I did top up the one in front with more gbait and was loose feeding caster on the right to try to make something happen. It was at times impossible to see the float in these swims. A 6oz hybrid and a 8oz roach on the waggler got me optimistic again, but then it was back to the odd bite from 2oz roach. I took another 2 perch from the willow but also pulled out of 2 more which is not unusual. With 90 mins to go I had my first bites on the long pole, but it was just from small roach on the right hand line, then a couple of ruffe. Eventually a 8oz perch and 6oz roach came of this line. I cupped some casters over the line in front as it had been dead, and my first bite here was from a 8oz roach.

Sadly although I could get bites on the long pole it was not from the needed skimmers, I did try fishing double dead maggot on the hook but this ended up with a longer wait for a bite from a roach. I guess the skimmers were not there, or did not want to feed. When the match ended I was a bit deflated that I had not been able to do a decent weight of silvers, but I had to be happy that I had a few fish and more bites than some anglers for sure.

I think I was virtually the last person to be weighed in my section, and my perch and roach went 10lb 11oz which I think beat 7 or 8 people in the 19 peg section. Alan had 49lb in the end all carp on the lead and bread, and that won him the mini section and put him 4th in the 19 pegs. There was a 70ln and two 50lb weights on match lake. I have no idea who won the match as I had to shoot off, but I guess Chris Davis won the silvers as I think he had 39lb of skimmers from peg 17 on spring.

An enjoyable if challenging day, probably cocked it up but I'm sure even I could catch a few skimmers if they wanted it.
Posted by Tim Ford at 19:49