After last weeks fun on the river I had thoughts of doing the same, but the forecast of another storm and lots of rain meant that wasn't going to be a good idea. Then on Tuesday Nicola Goodhind text me to ask if I was going to fish this match, and being as though it was late and I was in bed I just said yes. To be fair I would have fished or at least bought a ticket as the match raises funds for lung research, and I worked with Bob for a long time and know his sons Lee and Leighton. I had no chance to get hold of any bloodworm or joker but as the town stretch was being pegged I hoped I would do OK without it. I wasn't the only one without any b&j and actually only a handful of anglers had it I think.

I spent a couple of hours Friday afternoon sorting my kit as Saturday I was visiting family in Lymington. I didn't put lots of effort, recycled some rigs from the w/l and chucked in a waggler rod in case I drew one of the wide ponds. I even remembered to get my bread out of the freezer, and I had a good feeling about things.

Sunday morning, up early and got things sorted and made the wife a cuppa, and off to the rugby club at Saltford where I had their breakfast and really enjoyed it. There were 32 pegs in today, with about 20 pegs in the town and there was where I wanted to be. I was close to the front of the draw queue, but Darren Gilman was first in line, he drew pegs for the Goodhinds and put two of them on the Long Pond, and then drew himself at Malthouse. Then Martyn Rayet drew Long Pond and at this rate all the pegs in the town would be gone! Luckily when I put my hand in I pulled out a ticket that had peg 10 on it, in the town but where? It turned out it was in the middle of Horeshoe Pond, and I would call it an absolute bunghole flyer! A while back Martin Rayet had a good net of skimmers here, and plenty of roach are usually in residence, I was over the moon. 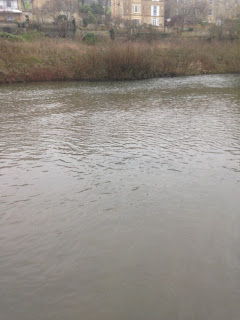 I started on a 6mm punch and was a bit worried as the float sat there for about 5 mins and did nothing, but eventually a bite transpired and I netted a 4oz roach. I took 5 more roach from here waiting a long time between bites, but they were all netters. It was dead then and I went out to 9m and fed bread here but it didn't work for me. An hour in and I grabbed the 0.4g rig for 13m and started on a red maggot, I dropped the rig in and it buried and I bumped something, the maggot was smashed, next drop and a nice roach deep hooked. I was fishing an inch over depth so I shallowed up to an inch off bottom, and this worked as I started to catch roach hooked in the top lip. The wind was really bad and was gusting around, this meant I could not loose feed and was going to rely on topping up with gbait, I did however loose feed casters at about 20m for the waggler. but I could only feed when there was a lull in the wind. Over the next hour the two 13m swims kept me busy with roach and perch, but no skimmers, then it slowed down quickly, so I refed and picked up the waggler. It was tricky and I had the wag dotted right down as I didn't expect the fish to hang themselves. I thought I had a bite but hit nothing, then next cast a good bites and a bend in the rod, I was as surprised as anyone when an 8oz chub was netted. A few casts later and a 4oz chub was landed. Bites stopped here after this.

I was sure the clairty of the water was scaring the fish, and that after catching a few they spooked. The pole lines were now really slow and it was hard to get a bite on the lighter rig with pinkie, but then a change, a boat was in the locks above and the water was pouring into the pond. This made the pond flow and colour started to come in, immediately I hooked a better fish and it was hard to get into the net as the inside was flowing like the river, but a 10oz roach was a real bonus. The boat then came into the pond and bugger me but it only turned around and was going back the way it came. AS you can imagine this had the effect of churning my peg up good and proper. About this time Glenn Bailey rang me, it was very opportune as I wouldn't be feeding or fishing for a while, I said to him I though I had 4 1/2lb at this stage. Once the the canal had slowed up a bit I fed more gbait on the 13m lines. I did also try bread again short but it didn't work. The 13m lines had benefited from the extra colour and I got bites from 2oz roach and perch, I had a nice steady run before it slowed and then another boat came in from the opposite side of the pond. This boat only came in ass end first!!! After reversing in he turned around and went out the other side, and left the pond in a mess again.

After another rest I fed the lines again, but this time they did not come back to life, there was an hour to go and now I was struggling. Once the water stopped moving I tried the waggler again, no more chub, but I did have about 5 roach and a dace. The last ten minutes back over the pole line and I had a fish every drop till the whistle. What a brilliant bit of the canal this is, I had some lovely roach and probably the best stamp of fish I've had, it was never hetic but when fish are 2oz+ it doesn't need to be. Fluoro maggot was the best hook bait today, followed by red maggot and fluoro pinkie.

I took the scales from Craig and weighed in Malthouse, Darren Gilman near the bay up there had 7lb odd of bleak, dace and chub, a real nice net of fish, that was top up there. I weighed 11lb 1oz and Craig 3lb. I wasn't sure if my weight would win as if someone had skimmers they would beat that. Once back at the results and with anglers coming back in I soon realised I had indeed won, drawing a flyer made all the difference.

Vinny Lunn took a nice picture of me with Bob Warden's sons, Lee on the left and Leighton on the right. Happy days, cheers lads I am really proud to have my name on your Dad's memorial trophy. 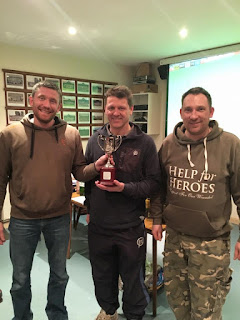 Had a good chat with those that came back after, and nice to catch up with the legend that is Chris Ollis. Things went well on the raffle too, as I won 8 cans of Thatchers! Best of all we raised £270 for Lung research, well done everybody!