I was never going to fish a match this weekend due to having to drive to Liverpool Friday morning, getting into Greenwich in London late Friday night, and finally getting home Saturday night. This was getting my daughter to a couple of dance auditions, she won't know for a month if she did any good but 2000 dancers are looking for about 50 places. I did want to go fishing on Sunday, a few hours on the river in the hope of a few bites would be fine, but this shitty fine rain on top of the cold weather put me right off, lightweight I know lol!

Back to 1997 and I had a 3 month lay off from fishing spending time with my young family, I got out on the glorious 16th of June and had a go at Newbridge and sat on peg 16 for 2 1/2 hours, it was rock hard and only had 2lb. I changed tack and gave the canal a go at Limpley Stoke fishing caster across, a 2lb perch, few roach and skimmers and 1 lost tench made it a better choice.

I was back up at Newbridge Saturday 21st June for the CLA teams of 4, and I found myself pegged on peg 20 just before the pumphouse. I set up a pole and a waggler with 22 to 0.09 on both, I fed two lines both with maggots but I only had bites on the waggler further out. Feeding 12 maggots every run through I got odd bites from small roach and had a 1lb chub in the first 3 hours, the next two were devoid of fish! I didn't record how the team did but I won my section with 6lb. I fished an open the next day on the Crane, and drew up the lane behind the marina. I had a shocking day lost 2 big fish on the pole and chucked back 2lb.

Sunday 29th June I was back on the K&A again but this time up around Semington for a 100 peg open match. Alas I struggled again with about 4lb which was made up of 1 tench and 2lb of bits, the canal fished hard with only a bag of 5 tench needed to win. Maybe the weather had something to do with it as I wrote that June 1997 was (at the time) the wettest June ever recorded in the UK. The reason for the large attendance was because the following week it was the Fish-o-Mania qualifier on the canal, and I had a ticket. I remember this match as I drew peg 1 on the Pile section but it had not been fished, when I got there all I could see was stinging nettles! I set about knocking them down so I could get to see the water, let alone get close, when the lad next door came down and asked me to stop making such a disturbance, I think I politely asked him what was I supposed to do, and he said just stand on them, I then told him politely what he could do lol!  I was told this peg was an unknown as it is rarely pegged, but I was only going to fish for carp as it was all about winning. I fed pellets, corn and casters right over the canal and fished in one spot with 0.16 to a 16. For an hour I had no indications, other than a tiny roach on double caster, then I had a bite and missed, so I lifted the rig out and dropped it in and out came the elastic. For what seemed an age I played this carp, and was chuffed when I landed it as it looked like a double. I hooked another in the last hour but came back with a scale, and that was the end of a very slow day. The carp weighed 9lb 12oz and it was enough for me to win the 25 peg section, of course not enough to get to the final.

That's just a short one today, hopefully I will get out on the bank next Sunday as I really want to see a float going under! One last thing, here is a photo from the past of the old Bristol Sensas Team, here's the names in case you didn't recognise them!

You decide which one makes you laugh the most, for me it's Bela lol!!! 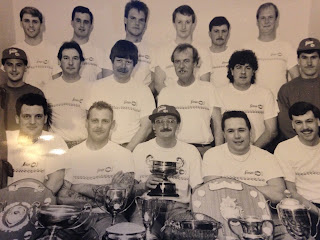