A Few Hours At Newbridge

I can honestly say I really wanted to go fishing this Sunday, but trying to get on a match on a venue I half fancied was not possible as all the leagues seemed to have no drop outs. That said I was concerned that the water would still be very cold after the ice melt and so was none to worried when Ken Rayner couldn't fit me in at Landsend. In the end I thought I'd give the river a go and on Saturday morning I thought it looked like the chub might feed, but I was off to Parkway to pick my eldest daughter up who was coming up from Plymouth to watch Rovers. Turned out fate played its hand when later that day trains to Plymouth were cancelled, so Lucy stayed the night with us and I had to take her to Parkway Sunday at 10:30am. I guess I was meant not to get on a match!

Of course the Avon had changed by Sunday morning, rain on Saturday night had added some more pace and colour to it, no chub then. I elected to go to Newbridge, I had a pint of caster, a few worms and some mixed maggots, that would do. Tackle was light too with just a heavy feeder rod. I really fancied fishing peg 18 which usually holds bream all year round. I got to the river with no trolley, and as I parked in the layby I spotted Warren Bates van. I gave him a ring to find out there were 5 of them out on the bank with the same idea as me. I huffed and puffed my way to the bank to find pegs 14 to 18 taken, with Dean Harvey on 18 having 3 bream, the rest were all struggling to catch anything. I walked to the pumphouse as 22 can be OK, but there was a pleasure angler in there. I didn't fancy a walk round the pumphouse so I went back the way I came and went into the little field and settled in on peg 10.

As I put the gear down and got my breath back I surveyed the river, it wasn't filthy dirty but it was pushing through. 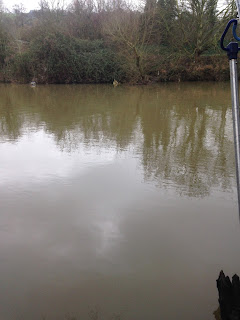 I ran the line through the rings of my Drennan Carp Feeder rod and attached a 28g feeder. Under arming it out into the river to see how much lead I needed it bounced around and into a snag, but I got it back. I cast out only 10m and slightly upstream and paid out a bow, and this was OK. Hopefully I was above the snags. I finished this off with a 14 PR355 to 0.148 Exceed. I mixed up Sensas red magic with brown crumb, and then realised I left me bait tables at home lol! I scattered them around me but all within reach. 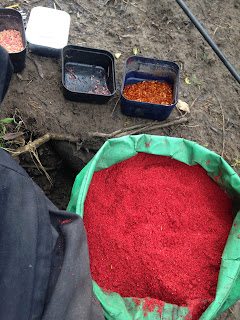 I spent the first half hour casting every 4 minutes to get a bit of bait in, but I didn't go mad as I didn't think these fish would be that hungry. I had not bites at all on 3 dead red maggots, so changed to 3 live fluro maggots and immediately had a tap tap and a 3oz roach was sung in. One thing I now knew was this was going to be tough, the roach was absolutely freezing cold! I missed a bite next cast, and then had a 6oz roach next cast. Bites stopped after this for a while, but an hour after starting I had a steady drop back and was pleased to feel a solid weight on the end, It was a bream and boy did it go in the flow, it was 4lb I reckon and made my day out worthwhile. Next chuck and the tip had only just tightened up when I had a really positive bite, I connected and it was a skimmer getting on for 2lb. Once again things went really quiet again, and a try on worm was a complete waste of time, as was casters. It was probably 45 mins after the skimmer that back on red maggots I had another proper bite and was attached to another good bream. This one gave a really good account of itself and when I finally got it out of the flow up popped a 6lber.

A couple more roach and a late 1 1/2lb skimmer were my lot, again they were caught on maggots, it was all I caught on today.  Just before 3:30pm Warren, Dereck Coles and Mike Weston came behind me. They had all managed 3 or 4 bream in the end, with Dereck having one huge fish estimated 8 to 9lb.  I was about to pack up myself and so took advantage of them and asked Warren to take a photo of me. I guess about 15lb tops, and it was a nice little bag on a cold river, and as I said earlier the fish were stone cold. I think we have a lot of rain coming this week which is a shame, as I am sure if the river gets right we could have some good days on it, trouble is there's not long left to go! 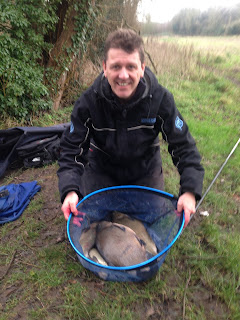