Last match on the river is always best fished at Newbridge in the hope that shoals of bream go on a feeding frenzy. I wasn't so sure they would as the river has been up and down so much and then we had the recent frosts, a milder spell would help. Of course Wednesday it tipped it down and put the river right up, but fingers crossed it would be OK by Sunday.

Friday I went down with a bad sore throat and cough, by Saturday evening I had nearly lost my voice but I felt OK so no reason not to fish. Up at 6:30 Sunday morning and tummy, or more specific bowels were not behaving, might have been the paracetamol and cider mix. Got to the Crown at Saltford for the draw and ordered a breakfast, it was a long wait for a very small breakfast and I wasn't impressed. I ended up back of the draw queue, that was until Andrew Chatterly came in late, and I was really hoping not to draw at Rotork as this is no longer a good area. All the pegs I would be happy with were being pulled out and I was soon staring at 4 pegs with no idea what was left in. I got lucky and drew peg 52 which has bream form over the years, Chatts then pulled out Rotork yuk.

I drove to the river and parked up near peg 18 where bream expert Warren Bates was setting up, no surprise he was on good un lol! The river had colour but not filthy, and was quite pacey meaning a float would be out of the question, handy as I only two tip rods with me. Walked nice and steadily in the sun to my peg and found Nigel Wyatt sat on the bream hole peg 54 and below him Jan Mazyk on 56. A lot of other anglers around me I did not know as they had come from as far as Cheshire today! 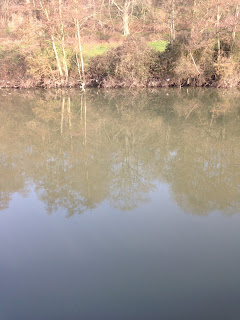 Setting up was easy, I had my gbait already mixed (senas red magic, Sonubaits river and brown crumb) and after getting everything positioned correctly set up just the one rod. Peg 52 is a tiny bit narrower than those around it and being the start of a bend has a touch of pace, I decided to fish down the middle and a 30g feeder held bottom here. A 14 PR355 to 0.148 exceed would do for all baits today. I must say I fancied Jan's peg as the flow goes across on 56 and maybe the bream shoal would be happier down there in the steady water. Ready in plenty of time I had a quick walk and peg 59 had an angler in it who said he lived in Saltford 30 years ago, and in form peg 61 was team mate James Carty. Back on my peg I formed 8 large balls of gbait stuffed with casters and chopped worm, threw them down the middle and chucked the feeder over the top. I cast fairly regularly to start to get plenty of caster in, but on 35 mins I had a proper drop back bite and felt the thud thud of bream, at about 6lb it was a good start. About an hour later just after Andy Britt had been along for a walk I had my second bite but I knew it was a small fish bite, in fact it was a 2oz perch.

Nearly 3 hours into the match I had no more signs, and then Nigel has 2 bream in 10 mins, and the lad above me on 50 does too. 15 mins after this I had another drop back and landed bream number 2 only for Nige to get another, We then found out that Jan was on 8 bream! I had taken both of my bream on 4 red maggots, and an hour later I got my third but this was on 2 reds and 2 casters (I don't do small baits for bream) but Nigel was now on 5, then 30 minutes later he was on 7. I was getting my ass cut, but then I got my 4th bream, another decent fish at 5lb+.  With an hour to go I worked out the time between my bites was reducing exponentially, and I had a 5th bream which was over 6lb with 40 mins left, then with 20 mins left I had a near 7lb fish which broke my landing net pole. I cast out and was going to leave the feeder in till the end of the match, and with 2 mins to go the tip went and I had a bream on, it didn't feel big but after 10 seconds it came off, not sure how I would have landed it had it stayed on lol.

Waiting for the scales Jan said he had stuck on 8 bream, Nigel had 9 and the lad down on 59 had 12 bream. I guess I was on the edge of the shoal, and I think they were visiting my peg and perhaps increasingly so as the match went on. Jan was first to weigh in our section, it turned out he had 7 bream that weighed 34lb 1oz, then Nige weighed 54lb (so 6lb average!), then my turn and I was chuffed that my fish went 34lb 10oz, so not far off a 6lb average (in fact 3 on the scales went 19lb 13oz).  The lad on 59 whose name I do not know weighed 62lb to win the match.

I got a picture of Nige with some of his slabs. Well done matey. 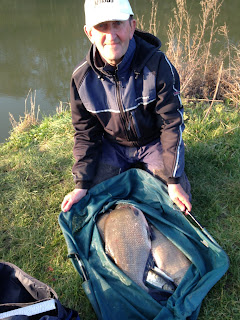 Getting back to the pumphouse it was soon obvious the river had fished poorly with some top anglers blanking, and it transpired the four of us anglers from 52 to 59 were the top four, and so I came 3rd and picked up £70. In the pairs Warren Bates and Rich Lacey won both having some bream. My partner Jerry Pocock was unlucky to be at Rotork and he won that section with 1 bream for 6lb, but we could not trouble the pairs coin. The biggest fish prize today went to an angler with a 9lb bream, Derek Coles had one over 8lb, and my biggest weighed 7lb 5oz. Amazing fish really and the ones I had were in lovely condition, sadly they'll be feeding well in a couple of weeks when we cannot get on the river due to the 19th Century close season law!!!!