I had been hoping to get back on the river for a while, but conditions hadn't been good enough to tempt me. Chris Ponsford, who is sponsored by Korum, and myself had wanted to get out on a river for a while. Going for this weekend we plumbed for fishing on the Avon at Saltford on the straight as some anglers had been catching roach there. Chris Ollis was also joining us for the day and we met in the cafe for brekky and a chat. Pons and Ollie are anglers with a great pedigree, much older than me (lol) they were fishing the Bristol Avon when I was still in shorts scooping for stone loach in Siston brook. It was great to meet up with both of them.  Here are the legends, still smiling after a tough day. 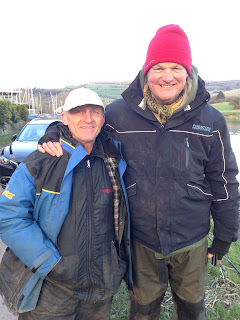 Getting to the river I was relieved to see it wasn't to bad, although the rain the night before and some frosts had me concerned some what. We settled into 3 pegs between the big willow and the concrete step, I sat in the middle with Pons on the step and Ollie on the Willow. As I looked at the river the pace and the colour said me feeder, and knowing that Dave Stiff had a couple here yesterday it was a good bet. I set up a 1oz feeder with 0.14 to 14 PR355. I had to lend the Pons a feeder as he had no open enders on him, this man has more feeders in his garage than I have ever owned, it was hilarious lol! 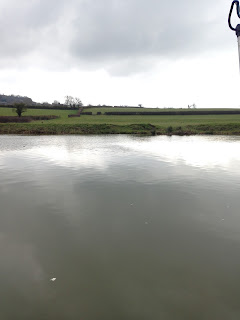 We were soon ready to go as we were all on the same feeder approach. I was going to put the standard caster and worm through the feeder, using sonubait river, bream and brown crumb. I was very surprised to get a bite first cast, so much so I missed it, but next cast I had a small roach. With red maggots on the hook I kept my options open on what might take the bait, and on my third cast the feeder never seemed to settle properly and I struck into a better fish. It turned out to be a near 2lb skimmer. the Pons had now had a dace and was getting bites, but Ollie had no bites on the bread feeder.

For the next 40 minutes I had regular bites but it was only from dace and small roach, a try with a worm hook bait slowed things up and it seemed no better fish were feeding at this stage. Ollie had switched to groundbait and then had a whacking bite and was attached to a lump. I shouted down was it a bream and he said no way, and he reckoned it was a barbel. Sadly a few minutes later the unseen leviathan snapped the hook length. Bites then became very hard to come by, it was almost as though a switch had been thrown and the river switched off.  By changing hook baits I was able to get a few bites on double caster, but they were hard to hit, I did get a 6oz roach and a couple of ouncers. The river was getting a bit pacier and there was more rubbish coming down on the surface.

Since I had been getting small fish bites I decided after an hour to feed maggots by hand about a rod length or two out, and plopped in the odd ball of gbait. About 3 hours in I decided to get a float rod out and set up a 13BB crowquill with an 18 to 0.10. Whilst doing this I put double worm on the feeder rod and left it out, nothing took it of course. When I made my first cast on the float I cannot say I was confident, I don't usually expect to see many fish on this method when the river has a bit of colour. However, within a couple of casts fishing double maggot I was soon seeing a bend in the rod and a 4oz roach was netted. The Chris's came behind me for a watch and I took a couple more roach quite quickly before snagging bottom. I soon realised there were some bad snags in the peg especially in front and a couple of yards down stream. I had to cast a fair bit down stream to avoid them, but even then I lost about 7 hooks. The float was fun but hard work, and sometimes running the float through got bites, other times over shotting and holding back over depth was best, the fish coming in short bursts. Other than a 1oz perch it was all roach with the biggest around 12oz. As the day went on the float line and feeder line both became almost dead, and when I lost another hook on the float I called it a day.

Sadly Ollie had dry netted losing that lump and missing a few bites, Pons had only a few fish but a couple of very nice roach, one close to a 1lb. I had a few fish which was nice on a very tough day. 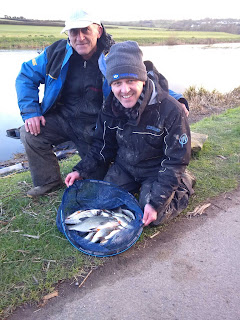 We spent a fair while chatting after we had packed up, and then started to see a few small fish top and a better specimen right over where Pons had been fishing. The fish are most certainly there but we had been beaten by the cold water. We hatched plans for a foray in the closed season on a lake, fingers crossed we get that sorted as being in the company of these two guys is awesome.