A new venue for the commercial house league in the shape of the KSD, mainly to keep some of the carrot crunchers in Somerset happy, Seriously it is a long journey up to Bristol so this was a nice way to give them a match on their turf. It was a busy week for me as usual, after a week away in Frankfurt I took a long weekend off and spent some time with my good lady, including Monday which was my birthday. I had a window of opportunity to make some rigs for the KSD only a few hours the day before the match, but I needed to know what rigs as I have not fished the venue since I was 16. I made a call to Nick Collins and he divulged some good info (and it seems he was asked by many others too!) and I felt I had a plan. I also had some info from Glenn who had taken 20lb from the venue practising.

Thursday I went down with a sore throat and it got worse and a nasty cough made me feel rough Sunday. At the draw we all knew that you needed to draw F section to do any good and as a team drawing an end peg would probably guarantee success. I had Liam Braddell in the knockout and I already knew he would get F section, and yes he did! Being in the same team I could not join him there and I was in B section and not the best of areas I was told, out of the knockout this year then.

I followed Paul Purchase to get to the right place to park up for my section, walking past peg C9 where Lee Trivett for Thatchers B was pegged I could see fish topping, as I walked won to my peg B3 I never saw another fish top. I spoke to Tony Goodland and also called Nick again to get more gen, nothing great and end peg should piss it. 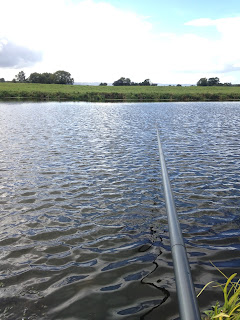 Just before the match began the wind which was in our face began to strengthen and loose feeding a waggler line was no longer an option as I'd be lucky to get the bait to 11m. Starting on the whip I threw in small balls of gbait to line up the shoals of roach and hybrids, after 10 mins and no bites I wasn't that worried thinking they might be a little further out. After 20 mins it was like a tennis match with everyone looking up and down at each other asking if anyone had caught....no! The wind was now blowing my rig back towards me and no roach was going to have that, but luckily for me a micro perch did. Merc then had a gudgeon and an odd tiny was caught. I had a perch of 1oz on the whip and after another 10 mins decided I had to go long. I fed 2 balls of gbait with a little hemp and pinkie at 10m.  Tried my chopped worm line which failed, tried the whip again, which failed. Out to 10m and after a long wait a tiny hybrid took the single fluro, and then next chuck a 2oz roach was a real bonus. I never had another bite on this line, or the whip line.

The wind got worse and by mid match the lad on my left snapped his whip butt section, and Merc snapped his waggler rod! Why are shit days always made even worse!

The next 3 hours were biteless for me, even Rich Whitmarsh on the end peg was struggling for a few ounces, and there were a couple of blanks including Shane Caswell who always draws complete shite. Paul Elmes (he of carp slayer supreme status) had 1 ruffe and after a little walk was still smiling and probably wishing he was on a commercial. I managed to snare a motherless minnow and another micro perch in the last hour, and in the end everyone caught a fish in the section. I tried fishing a waggler down the middle feeding balls of gbait and never had a bite, I tried little bits of worm over little bits of chopped worm and never had a bite, it was total and utter shite!

F section was solid, with Liam only beating one person in his 5 peg A division with 16lb, really!!! Paul Purchase had 27lb, Kev Dicks 20lb, James Carty 17lb  and Rich Lacey 12lb completed the top 5 overall in this one section. Nice fishing if you can get it.

Turned out I was top points scorer in our team which came last on the day, lol. The B team pissed it off the end peg 9, and Nomads won their div off peg 1. Not a good venue for a team match, at least not one with the same peg number in each section.  Still great fishing if you land on them.

Not much more to say about the day, a really unusual poor days fishing, but we managed to laugh about it as we fished and weighed in. The locals just could not believe it, and one lad in my section who had 1oz said it was the worst day he had in 40 years on the river, I blame Shane Caswell lol!!!!
Posted by Tim Ford at 20:16